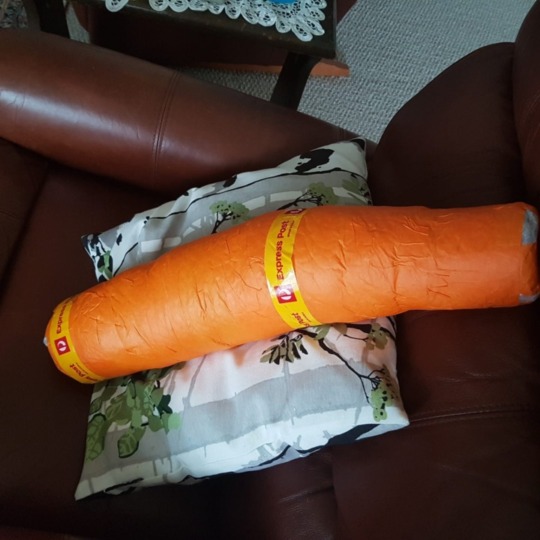 When the Shadowfax restoration was done, nearly 10 years ago, there were lots of bits missing from the remains of the bike that needed to be found. You know the story so I won’t bore you with it again. One of the necessary parts was an exhaust system. Thanks to a myriad of Kawasaki fiends all over the world, Dave and I managed to accumulate all the bits that we needed and the bike debuted to rapturous applause at the Barry Sheene Festival in 2012 🙂

The exhaust system problem was solved very neatly courtesy of a (now) friend from Queensland, called Dave Marett. Dave is a ferocious restorer of old bikes, especially 70’s Kawasakis and 90’s Suzukis. Anyway, Dave contacted me and said he had an exhaust system that he’d taken off a bike and that I was welcome to have it for the resto. Like most people who got involved in the project, no money changed hands in this deal, it was just a bunch of crazy Kawa people determined to do whatever it took to get my old dunger back on the track. Dave sent me a picture of the system just after he had cleaned it up and painted it and I said it looked to be just the duck’s guts. 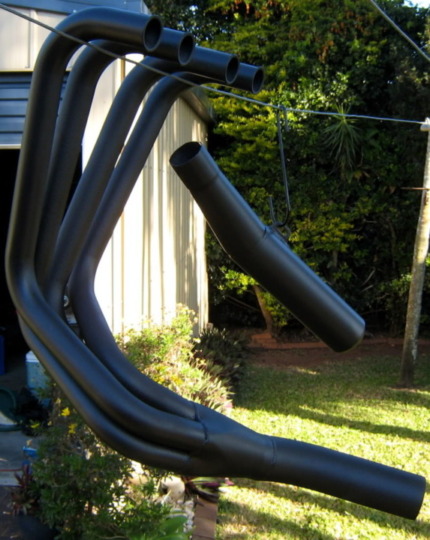 In the course of time the pipe arrived but it was just the headers as Quinny had told Dave that he had a Kerker muffler that would fit and that was what was fitted for the Sheene and subsequent shows. 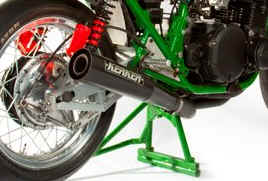 It was period, it looked the part and even though the bike originally didn’t have a Kerker, nobody seemed to mind. In the course of time, the Kerker was returned to its rightful owner and I had another muffler fitted that was possibly the ugliest ever fitted to a bike (with the exception of 21st Century ones) and the bike was shown with that pipe. 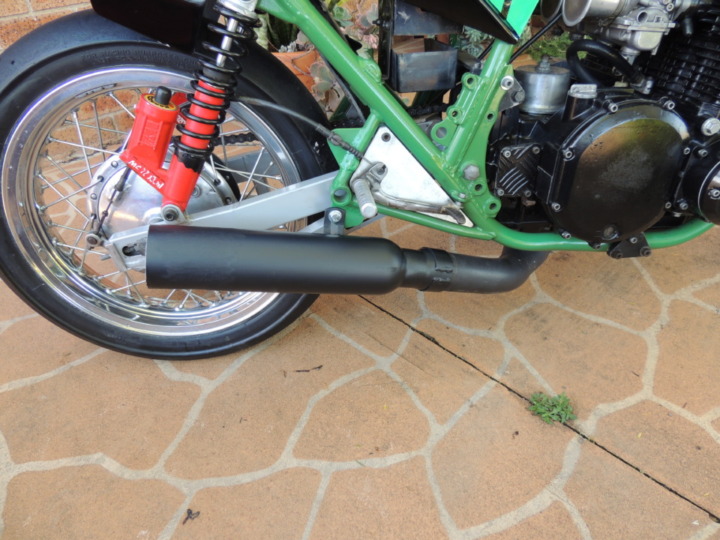 But I had regained sufficient range of movement in my right knee to seriously consider actually riding the thing (yes, it’s bizarre, I know, but I still haven’t) and I knew that the muffler, as fitted, would never pass a noise meter test even for something like the Broadford so I went to my local muffler shop and Andrew cobbled up a muffler from a hot-dog car muffler that actually sounded quite good and was sufficiently quiet to pass noise meter testing. Yes, it was also ugly (hell, the original pipe was ugly) but it worked. 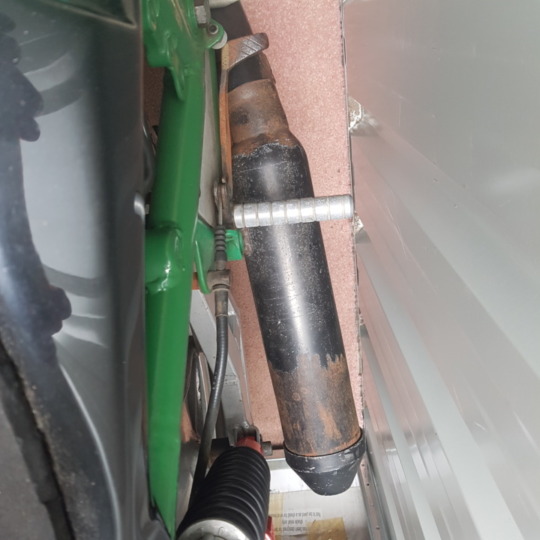 I took the bike to Lakeside in September 2014 with the hope of displaying the bike and also riding it in the lunch time parade. The display went brilliantly and the bike received great reviews from lots of my friends and some celebrities too, including multiple World Champion, Kork Ballington. But, when we started it up, it was running like a stuck pig, the muffler had messed up the jetting and it was popping and banging like crazy. Oh well, another lesson learned, I should have taken it to Dave’s and gotten him to tune it before I left for Queensland.

So, for the last years the bike has languished in the shed for long periods in between being dusted off for various shows. But it has always bugged me that everything about the bike looked period and great but that muffler, urgh.

So last week, in a burst of hubris, I decided that I’d get in and do something about it. This sudden burst of enthusiasm was mainly prompted by the fact that my daughter’s partner has recently started working at a local muffler shop and is already producing some excellent specialised fabrication stuff as well as fitting mufflers to standard cars. Scott had a look and said, yeah, he could do something about that. Good news.

Now, being a braces and belt guy like I am, I thought to myself, I thought, “You know, Phil, you should ask Dave (Qld Dave) if he has an old Kawasaki muffler lying around that he’d be willing to part with.” A quick PM and later that day an answer. Yes, Dave does have a muffler that would suit. It’s an unbranded one but it would definitely fit. How did he know that it would fit? Because it was the muffler that belonged to the headers that he had sent me back in 2011!!. Reaching into the gloom that is my memory I remembered the photo he had sent me of the headers and the muffler hanging on his clothes line (see above).

Dave sent me a couple of current pics and it for sure is the muffler that belongs with my headers. A price was agreed to and Dave let me know the day it was posted. “If a wooden leg arrives at your place,” he said, “You’ll know what it is.”

So, as noted at the top, said wooden leg has arrived. I must say that his description was perfect, it looked so funny all wrapped up like that. Here it is out of the wrapping. 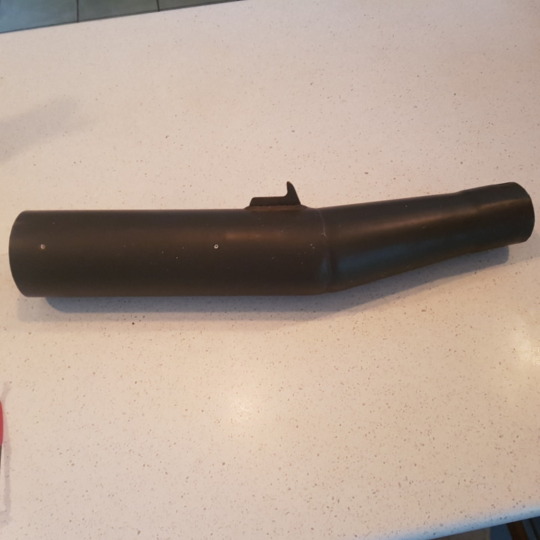 Now the first thing that I noted was those two little silver spots that look like pop rivets have been removed from there. Mmm, around the right dimensions for a Kerker label. Well, back to the source, I PM’d Dave again and here is his reply…”Phil the system was always a mystery….The headers are exactly the same as Kerker but the muffler is internally different from any Kerker I’ve seen before….So I added a Kerker badge to it….I removed the badge years for another 4 into 1.” So, there’s you answer, anybody got a spare Kerker badge I can have?

Anyway, to round out this whole droll narrative. I’ll get Scott to remove the old hot-dog and refit the new one back onto the pipe that it belongs with and all should be well. I hope you enjoyed the story, I think it’s a hoot. Oh, and speaking of hoots, I was sent this little video this morning; haven’t laughed that much in ages..