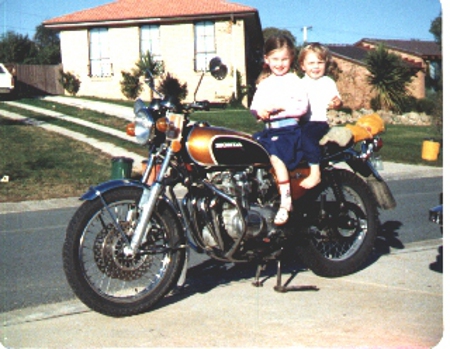 Jimmy Buffett is one of my favourite singer/songwriters. As well as his great music, he has a wonderful way of language usage in his song titles. The above is one of them, along with “The weather is here, I wish you were beautiful” and “If the phone doesn’t ring, it’s me.”

Trolling through old photos this morning I came across this one that keys in nicely withe the song that I was playing in the car yesterday. The photo was taken in Wanniassa, ACT in front of my house. Sitting on my 500/4 is my daughter, Natalie and my son, Graeme. Since I figure this photo was taken in early 1981, Nat would have been 5 and Graeme 3. Where have the years gone?

The 500/4 is the only bike that I have ever owned which was seriously “worked on” And it is the only bike where the work was done substantially by me. Dissatisfied with the pathetic lack of performance of the single pivoted disk brake on the front of the Honda (especially in the wet), I started looking around for a solution. Keen riders were already partially solving the problem by fitting another disk on the front, but that still mean that the design of the disk assembly was below par.

To do so meant that you had to buy another bottom left hand fork leg, and refit it in place of the existing one. Doable but still not as good as I’d have liked. My good mate, Alan Harding came up with a cleverer solution. He was wrecking a GT750 Suzuki water buffalo and, with a few rough measurements being made in his garage, we figured that the whole front end could be bolted straight onto the Honda.

I think he charged me $80 for the whole thing. I took it apart, pulled the existing front end out of the Honda and dummied the forks up to the stanchions. We’d already determined that the fork tube diameter was the same so that wasn’t a problem. Soon it became clear that the fork SPACING was slightly different but this was solved with the addition of a couple of small spacers on the axle. Switching the fork tubes around meant that I could have the calipers behind the forks instead of in front, a better idea also.

The wheel issue was solved by lacing the Honda rim to the Suzuki hub and it all bolted together nicely. In practice it worked brilliantly and it completely solved the braking issues that came with the antiquated pivoted disk fitted as standard.

Of course the relevance to the title of this article is that the picture was taken 40 years ago! I AM growing older but I like to think that I’m not growing up. I’m still riding, having passed the suggested three score years and 10 and I can’t see any reason why I won’t continue to do so. It’s always been my idea that you keep doing the things that you enjoy doing until you can’t physically do them any more and that’s what I am panning on doing.