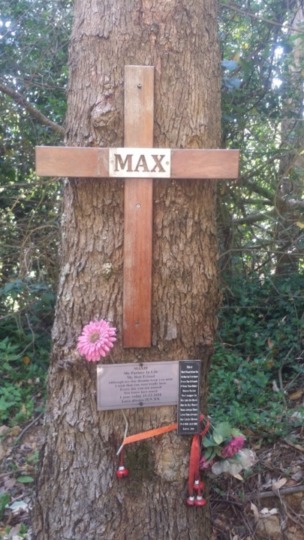 For many of us motorcyclists in the Wollongong area, today is a difficult day.

On Saturday 11th December 2010 word started circulating on the forum in the mid-morning that there had been a fatality in Kangaroo Valley. The fact that it was mentioned at all was ominous and, by mid-afternoon it was confirmed that one of our best-known fellow riders, Max Pinch, known as Maxie to his buddies, had died in a head-on collision in the valley.

Maxie was an institution in the close-knit world of Illawarra motorcycling. Everyone knew him, respected him and loved him. It was an awful shock to us all and some have still not recovered. The purpose of this article is not to summarise Maxie’s life or to provide a belated obituary. It is to refresh our collective memories some ten years on from that dark day, to share some perceptions and to show that, though the time has passed so quickly, yet he is still in our hearts and minds.

Max was just a little guy, even the photographs don’t really give an indication of his slightness of build and shortness of stature. My guess is that he’d have been lucky to be 5 feet tall in the old money. Despite this, he was a fearsomely good rider, a fact that became apparent if you happened to be on the road with him. Of course some might have said that he had a natural power-to-weight advantage but there was much more to it than that.

In the early days of my riding, my good friend and mentor, Bob Holden, gave me some good advice. “Phil,” he said “You need to always keep in mind that there will be many riders who are better than you and many who are worse. As long as you are prepared to be content with being neither, you will enjoy your riding.” It didn’t take me hardly any time at all to determine that Max belonged in the first category, not the second.

As I found out more about Max I realised just why he was worthy of the respect that everyone gave him. He had been a graded road racer in the early 70’s hanging around with the “names” of Wollongong motorcycle sport, Livio Ronchin, Geoff Huard, Johnny Zammit and their ilk. He raced at Bathurst, Oran Park, Amaroo Park and visited Daytona Speedway and had his photo taken standing with his mates on the famous banking; I mean how cool was that? But that was long before I met him. My perception of him is from when I knew him as a vastly experienced and talented road rider, and he sure was that.

Max was a bit of a loner in that he preferred to ride mostly by himself and didn’t go in for big group rides. The reason for that became pretty clear not long after I first met him in 2005. Max had three bikes at that stage. The first was a little Honda CBR250RR, the Baby Blade as it was known. It suited Max’s size very well and also provided him with a platform to do things that others would not consider. There were few riders who could live with Max and the 250 if he decided to put the hammer down. Many, many, young and less experienced riders on 1000cc sportsbikes arrived, hot and bothered at the Pie Shop having received a riding lesson from Maxie on Macquarie Pass. Max, of course, was characteristically modest about it, his craggy face smiling and his eyes sparking as they always did.

Max also had a BMW adventure bike; not a big 1200 model, the “little” one. I don’t ride in the dirt but his mates who went adventure riding would always come away amazed at his skill. Not long before his death he completed a round-Australia tour on the BMW, doing the whole distance riding solo. Incidentally this photo DOES help to indicate just how little Max was. 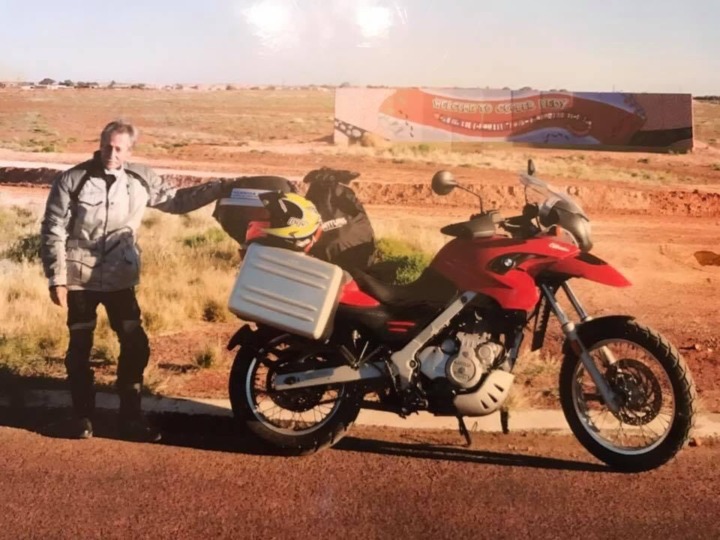 And then there was his sportsbike, an immaculate 50th anniversary Yamaha R1. I don’t have a photo of Maxie’s bike but you know the one I mean. 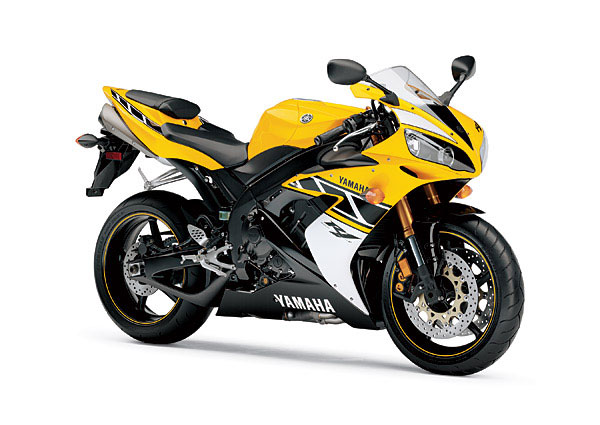 And if Max was fast on the CBR he was astonishing on the R1. Now, on reflection, I always felt that he was a bit TOO fast on the R1, but his exploits were probably seen through the eyes of a rider who had nowhere near his skill level.

It was always a treat to pull up at the Pie Shop (I went there much more often back then than I do now) and see one of Max’s bikes in the parking area. You could always be sure of some sparkling conversation, some delicious riding anecdotes and that huge smile that was part of his persona.

Max’s funeral was a huge affair, the venue was filled to overflowing and the service was piped outside to the hundreds gathered on the lawn who were unable to get inside. My good mate, Jeff Black, took me in and we left early to try and get a seat. I was still in the wheelchair courtesy of my big off on the pass just a few weeks before but we arrived way too late to get inside. The service was a bit of a blur to me, my selfish thoughts far too occupied with how eerily similar Max’s accident and mine had been and how horribly different the outcomes were. But I held it together until the minister said that they were going to show a video tribute of Max’s life and play some music. He invited us to ponder on why were were there and remember all the good things that we could about Max. The music started and it was Rod Stewart singing, “Have I told you lately that I love you?” I imploded and asked Blackie to take me home; it was just a little too raw and immediate for me.

I have never claimed to be one of Max’s close friends, people like Peter, Greg and others belonged to the inner circle. But it didn’t matter because Max treated everyone like they were a close friend and, if you rode a motorcycle, even more so. There is a connection between us that goes beyond riding and a respect that has grown through the passage of time. We were cruelly deprived of a wonderful person but our memories keep him close to us.

I want to thank Max’s partner, Jen, for providing me with the photos in the gallery below. They sum up even better than my words the man whose life we remember again today. Gone, but by no means forgotten.