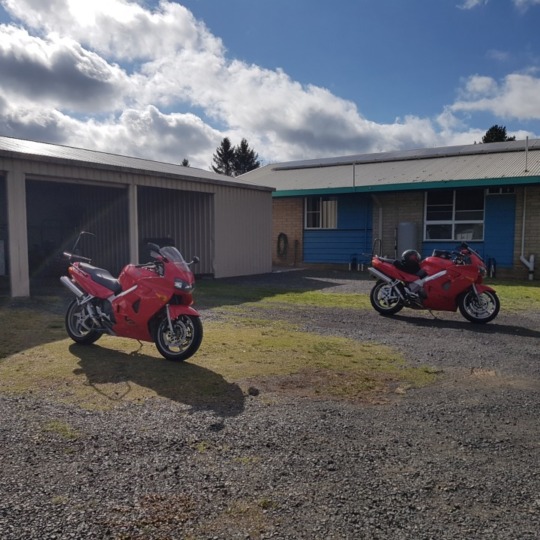 While the days up on the northern tablelands were warm and sunny the mornings were quite cool. We were grateful to the owners of the Ebor Motel for letting us park the bikes in the shed pictured so no problem with security or keeping the bikes dry.

Tuesday was going to be a light riding day, just up the Waterfall Way through Nymboida and ending up in Grafton. Return and call it a day. Our deplorable map reading skills told us that it was going to be about 350 kms; it actually ended up being about 250 instead. Anyway, start at the beginning. While the bistro at the motel served lunch and dinner they did not do breakfast but the owner pointed us in the direction of the only cafe in town, called “Fusspots” which was, he said, on the left of the road as were were heading north straight across the road from the servo which we also needed. Well, Fusspots was actually on the RIGHT side of the road about 70 metres north of the motel, and the servo was also on the right side of the road about a kilometre further up. Beware of country people giving directions. But they were both on the highway so it wasn’t a problem so, after fuelling up, we headed back down the road and stopped outside the cafe. The flashing “Open” sign was illuminated and the screen door was unlocked. Nevertheless, my gumby brother opened the door, stuck his head in, and asked if they were open. When told that they were, he said, “But the sign on the door says, Closed Wednesday.” “Yes”, the lady replied, “But today is Tuesday.” Honestly…

A great breakfast of home-cooked bacon and eggs fuelled US up for the day and the decor quickly told us why the cafe was called what it is called. Several hundred of them, I reckon. 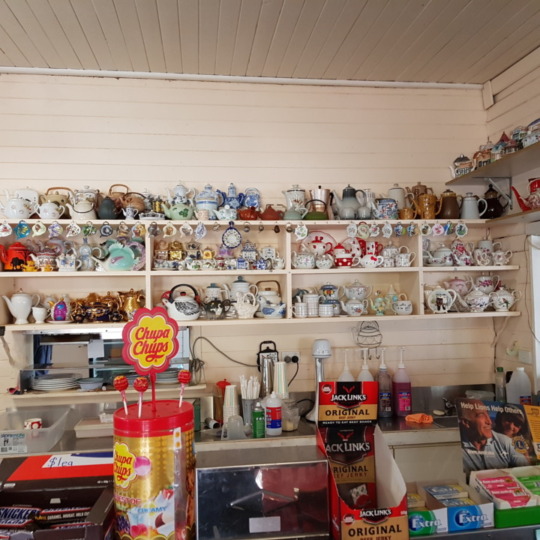 While we were eating a cat arrived at the front door demanding to be let in. It seems she is a stray who has adopted the owner but the lady wasn’t having anything of it. “If you want your breakfast, you can come around the back and get it, it’s in the bowl there,” she told the cat. The cat persisted and, by the time we were leaving the owner had relented partially and put out a bowl of water for her. People and their pets.

This part of the journey I was eagerly anticipating. I’ve ridden the Nymboida half a dozen times both on group rides and by myself and I was so excited to be able to introduce Paul to it. But, first we had to negotiate a couple of road works hold-ups, what a surprise. I know I’ve said it before but it always amuses me how antsy motorists get when you use your filtering privileges to get to the head of the queue and take off when the light goes green. I mean, you’re not holding them up by doing so, are you? And you’re going to overtake them anyway, aren’t you? Motorists are funny cattle.

Once clear we settled down to enjoying the road. The first bit runs along the saddle of the mountain range with the paddocks falling away from the road on both sides. Then the serious bit begins, a long, intense series of mountain passes but very different in character to the Oxley, for example. To start with, there are much fewer advisory speed signs and the road has virtually no guard rails or fences should you over-cook a corner. If you start looking at what’s on each side of the road it could easily put you right off your game, the trick is to ignore it and just concentrate on the road. It is a logging road though we saw no logging trucks at all (I knew it was and had warned Paul that we could have company). The inside apexes of the left-hand corners were a bit dodgy from the trucks but, again, watch the road and take care and it wasn’t a problem.

About half way through the twisties we dropped down a mountain pass and came to another roadworks. Here it became apparent why there were no logging trucks on the road. The timber bridge over Clouds Creek had been extensively damaged in the bushfires and the temporary crossing to replace it had a very restrictive load limit. Tough for the timber industry but good for us. 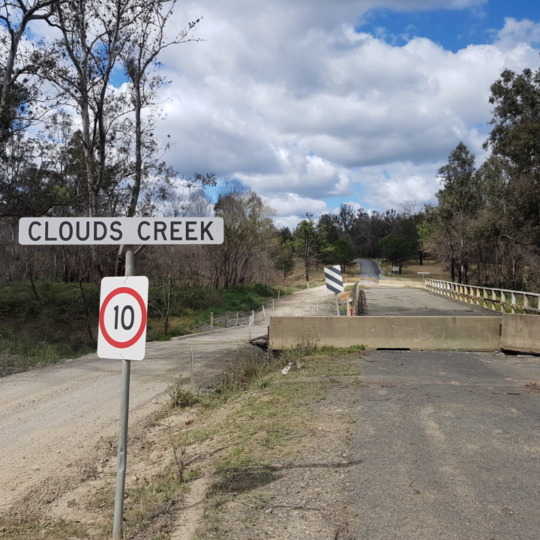 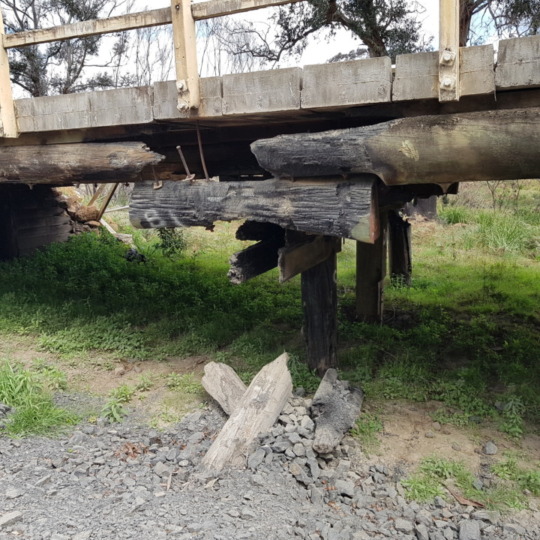 If you’ve never ridden the Nymboida you really owe it to yourself to do so, it is a grand piece of road. At the end of it, Grafton straddles the glorious stretches of the Clarence River and, while we were too early for the jacarandas, there was plenty to see. The War Memorial park at the end of the main street is right on the river and is a tribute to the hard-working people of the local RSL, it’s really worth a look. 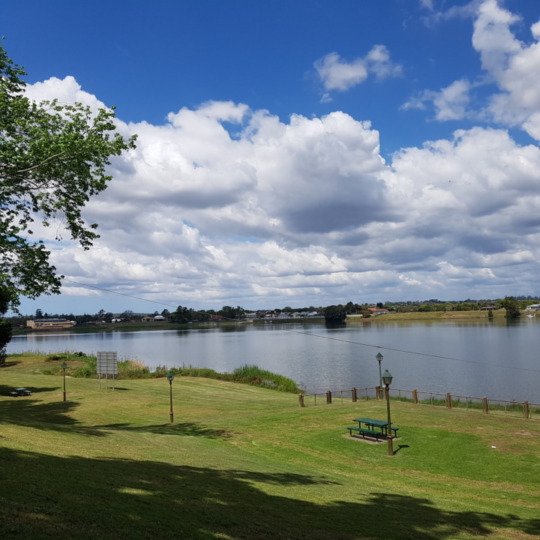 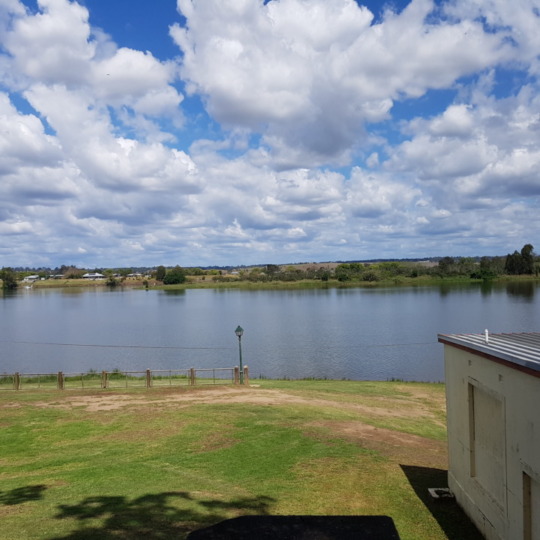 A great Vietnam Memorial is part of the park but I am afraid that the committee who decided the wording on the local cenotaph might have been out to lunch when the final decision was made. 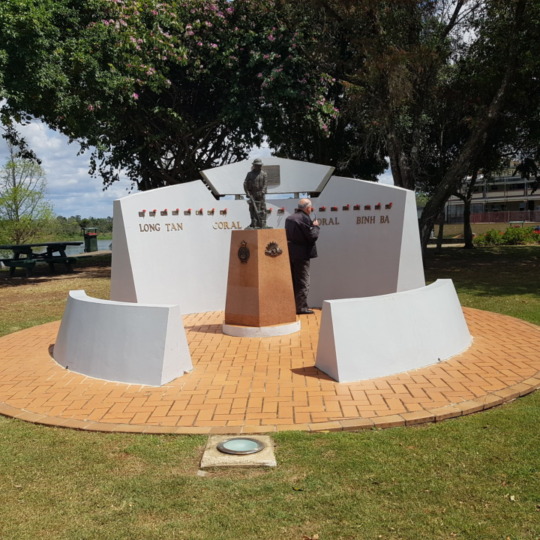 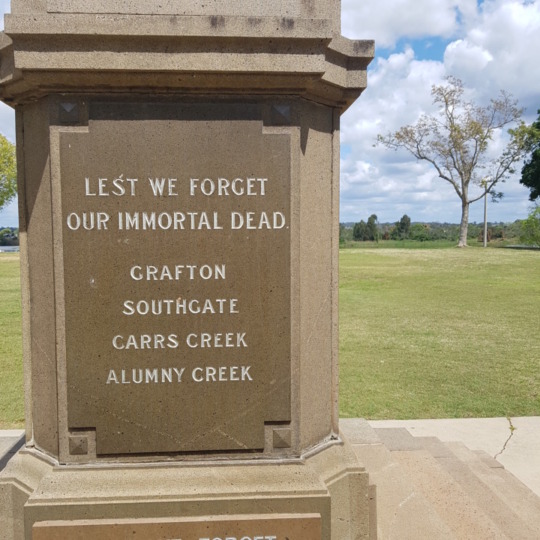 Coffee and a piece of carrot cake and then it was back on the bikes to enjoy the delights of the Nymboida yet again. Ain’t life grand? Bearing in mind that Fusspots was going to be closed the next morning, we boxed clever and bought some cereal and milk and a couple of bananas from the shop/servo and, using bowls and cutlery borrowed from the motel kitchen, we were well prepared for the following morning. Dinner in the bistro again was great and, amazingly, we met up with another couple from Jamberoo who were travellers and camping in the campground out the back.. Small world indeed.

Wednesday was slated to be the last day of the trip but a quick check of the map showed that that would entail another 600 km+ day and on the last day. Rather than do that we divided to split the homeward leg in half and aimed for Singleton for our Wednesday night stop leaving us a Putty run in reverse for the last leg. Unfortunately we had to give the Dorrigo a miss and also quarantine the Kyogle-Murwillumbah run for another day as well. Oh well, more reason to go back.

The New England Highway is pretty boring but at least it gets you there. One thing we noticed is that, if you take the Armidale Town Centre bypass, there isn’t one single cafe/bakery/take-away on that whole route. Local merchants are missing making a big killing in my opinion. Consequently we had to wait till Uralla to get breakfast and even then, it was at a servo/road house. Lift your game, peoples.

The run down the NEH was pretty uneventful apart from a numpty in a SMART car who came boring out of the side-street to Wingen and then merged straight out of the merge lane into the fast lane which was totally occupied by me. Damn I wish the VFR had a LOUD horn.

The Royal Hotel was busy but the bistro does great dinners and a good night’s sleep ensued. The beer garden was v noisy but that’s what God invented ear plugs for and I slept like a top.

Next door to the Royal is a take-away called Happy Grillmores. At 6 when we got up, Paul toddled over to see if they were open. I expressed doubt but he came back with the good news that they were. Turns out that they open at 0300 EVERY morning and serve breakfast and lunch to the constant stream of tradies, power station workers and mine workers who constantly stream by.  Morning shift goes from 0230 to 0930 and day shift goes from 0930 to 1430. 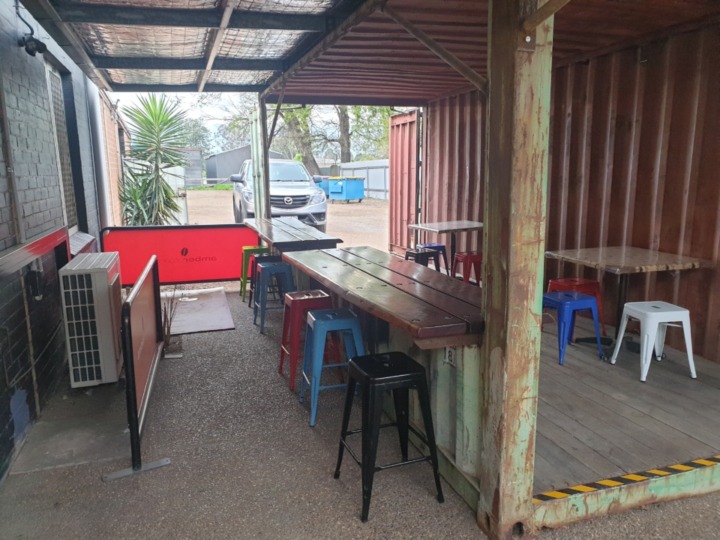 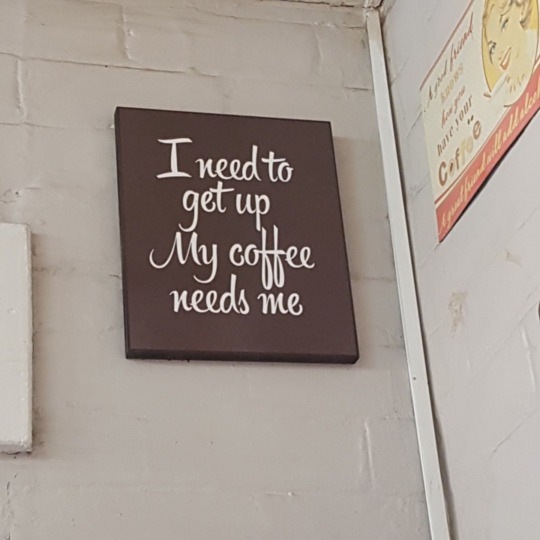 The run down the Putty was uneventful. My new front tyre is now well and truly worn-in. Coffee stop at Grey Gums then a scamper down the backroad and home by mid-afternoon. 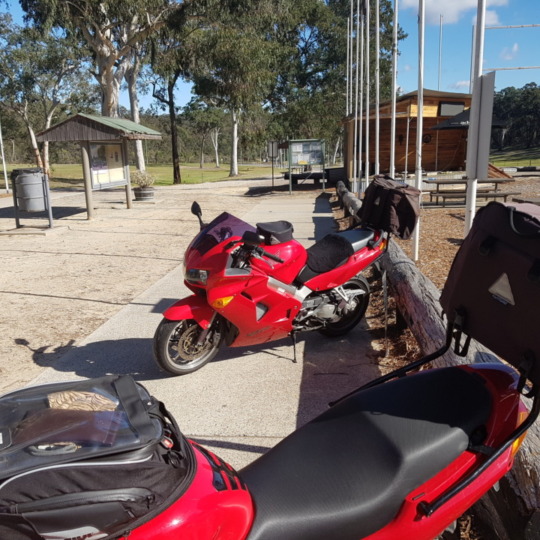 1836 kms total, around 400 km per day average. Nothing beats touring on great roads on a great bike.