Well, I certainly have been slack, haven’t I? Well, at least partly. It’s partly because I have spent the last five days on the road and mostly in places where there was poor, or no, internet reception. But that’s no excuse, the bottom line is that I have been enjoying myself too much.

My brother, Paul works a couple of days a week at schools down here so planning a tour requires a little more care than it would otherwise. In any event we were determined that we would get on the road for a few days at least during this school holiday period so, after some planning, we packed up and headed out  last Sunday morning early. The north coast was the chosen area, partly because of the great roads but more because of the fact that Paul has never ridden anywhere north of Port Macquarie so I though it was time to broaden his education.

A big day was planned for Day 1 so that we’d have plenty of time to play on the twisties on the remaining days. 616 kms from my place to Port Macquarie via the Putty Road, Gresford, Dungog, Stroud, Gloucester, Krambach, Nabiac and up the Pacific for the last leg. As I reported a week or so ago, there are extensive roadworks on the Ten Mile but nowhere as intrusive as they were when Helena and I passed through in the van. As luck would have it we encountered n SUV about 2/3 the way through but we had a long day ahead and there was no sense in getting stressed. We always stop at The Tree, anyway, so there wasn’t much point breaking the law, and then pulling over again pretty much straight away. 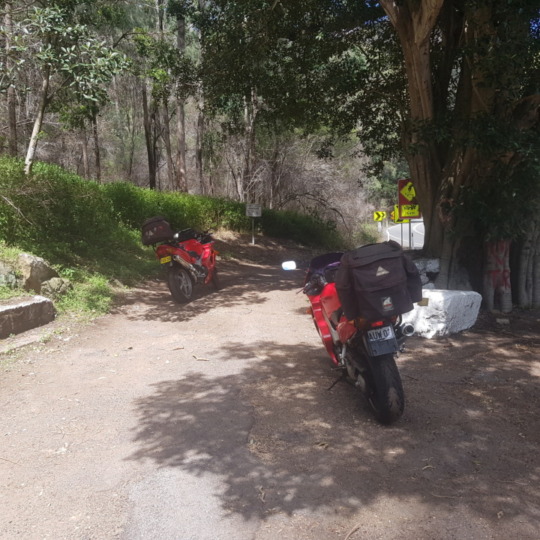 Leaving the rest stop, Paul pulled out onto the road first and I checked then followed. The next instant a P plater on a Ducati (yes) screamed up behind me from like nowhere, and overtook me on the INSIDE, barely squeezing between me and the armco fence. When I checked to pull out he wasn’t there so you can guess what speed he was doing. He disappeared just as quickly and, over the crest of the next hill, he overtook Paul and the two cars in front of him while heading into a blind right-hander. It took me several moments to gather my wits and steady down, realising that this fool had early killed me. We never saw him again.

The road between Gresford and Buckett’s, just out of Gloucester, is just as appalling as ever, I swear I will never ride it again until it’s fixed. However, we survived, gassed up and checked remaining trip distance. It WAS getting on but we figured that the 140 kms was doable before dark and still allow us a coffee break. “Roadies” in the main street is an excellent, motorcycle-themed cafe and they make great coffee. 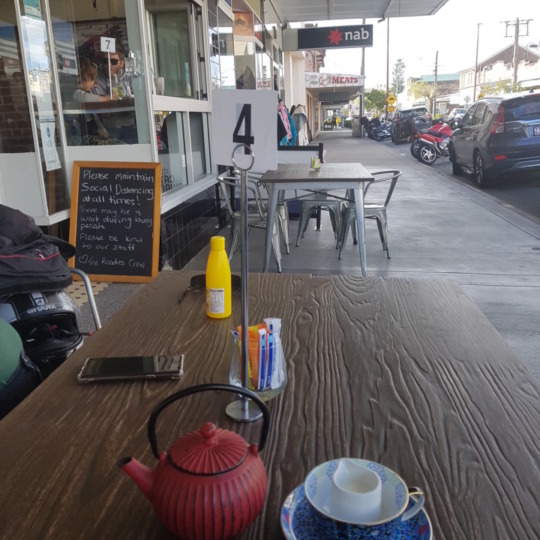 By the way, you may have noticed my new number plate. QNZ08 was the old one that came with the bike. Queensland and New Zealand? I don’t think so, but I never got around to changing it. But, when Paul bought his new bike he wanted to keep his old plate and he offered me the plate that was on the new bike AUW02. I haven’t really made anything of the letters yet, but 02, Gregg Hansford’s old racing number? As the ad days, “Priceless.”

It never ceases to amaze me that, when grinding along the Pacific Highway, it always seems to take LONGER to cover the miles than it does when you’re on the B roads. Nevertheless, we arrived at Port in plenty of time, booked in and parked around the back of the hotel in the last available parking spot. I asked the girl on the desk if we could park under the stairs as I usually do but she said that where we were parked was pretty safe. There were TWO CCTV Cameras on the other side of the park and the Police Station was just across the street. We took the risk 🙂

We were blessed with magnificent weather for the whole trip and it was a good thing, too as Monday was Oxley day. We headed to Wuachope and the Jolly Frog Cafe’s legendary $7 bacon and egg and coffee breakfast but the strain of selling a great brekkie at that price must have been too much as it is now closed.  Well, the hipster coffee shop a couple of doors up would have to do. Great choice as it turned out. 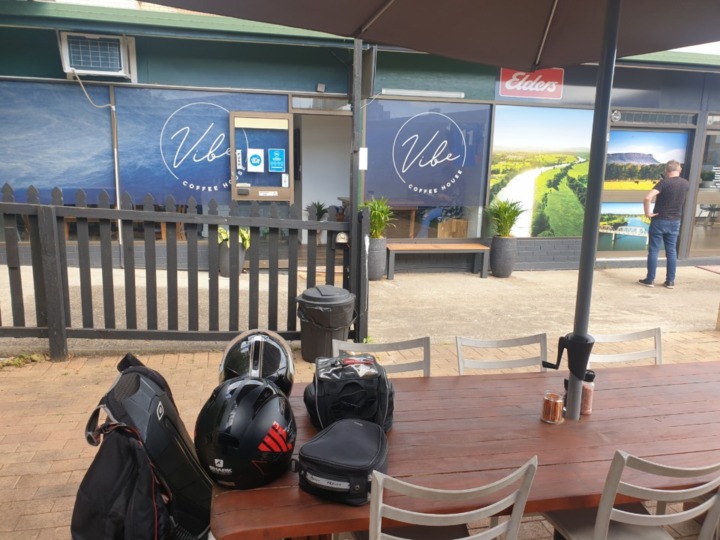 While we were eating, two old gentlemen arrived and sat at a table near the footpath. One had a newspaper under his arm and the other a map and a tablet (computer-type). I nudged Paul and said, “I bet these guys do this ever Monday morning.” As we were leaving, Paul went over and said hello and asked them if this was their regular Monday breakfast. “Oh, no, not at all,’ one of them said, “We’re not locals, we’re just passing through like you guys are.” When Paul asked them where did they call home, the reply was “Jamberoo.” Yep, about 15 kms from our place. It is, indeed, a small world.

As we were about to tackle the Oxley I decided that I’d try out my action camera. Helena had given it to me for Christmas a couple of years ago but I’d never gotten around to mounting it and seeing how it worked. I’d done a couple of quick runs with it before we left home so I put it on the bracket and we headed off. Booming down the hill just out of town, I noticed that it was vibrating a bit more than it had before and I was just looking for a place to pull over and check the mounting, when it snapped off and I heard the gruesome sound of my back wheel running over it. I eventually found a place to turn around and go back to look but I didn’t find it and I sorta figured that, even if I DID find it, it wouldn’t be worth it. Paul had been behind me and, in true Top Gear fashion, he rode on and left me to struggle with my dilemma.

We stopped for a pit stop at Long Flat where the cause of the problem became clear. Nobody had told me about “tethers” but, then again, I hadn’t asked so.. 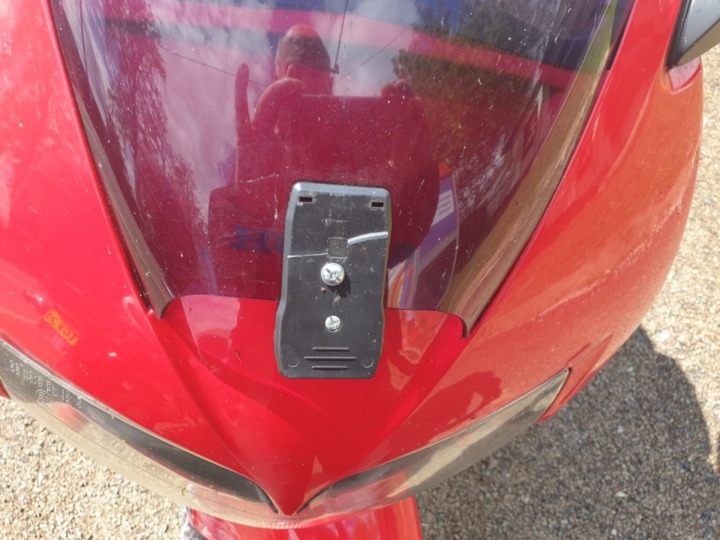 The hairdresser’s shop in Long Flat has somewhat of an identity crisis. 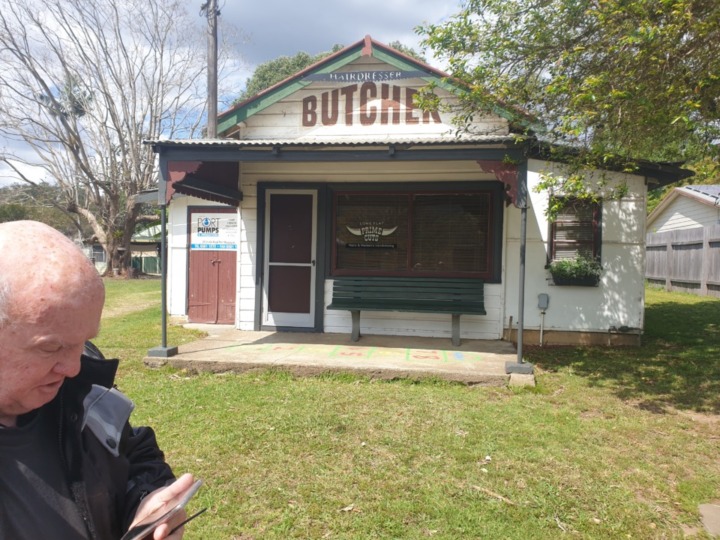 Anyway, the Oxley. How has it recovered from the devastating bushfires in January? Remarkably well I am happy to report. Firstly, the sections of tar that were burnt due to trees falling across the road have all been rehabilitated and the road has no “nasties” at all. But, more importantly, RMS and the local council have been very busy. It is impossible to estimate but they must have felled literally THOUSANDS of burnt and dangerous trees along the 60 km stretch of mountain pass. The remains have been bulldozed off into the bush leaving just the burnt stumps. The remaining trees themselves and the bushes have regenerated amazingly over the winter and it all looks very hopeful. BUT, most importantly, the cutting down and clearing of the trees has dramatically improved the sight-lines through the corners and the road is vastly more enjoyable than what it was before. Speed limit? I didn’t actually look but I wouldn’t have wanted to go much faster that what I did anyway. LOVE my new front tyre, by the way.

I know I’ve said it before but I can’t quite figure out how the remaining 80 kms or so between the top of the mountain and Walcha can be a simple, two lane country road and yet have a 110 km/h speed limit. Answers on a postcard, please.

The road from Walcha to Uralla is magnificent as well, tall tales about excessive speeds being achieved along this stretch seem easily believable. A lovely mum and dad cafe served us lunch and a drink, my favourite hipster cafe in the old Presbyterian Church building is also closed down (or maybe they just knew we were coming) 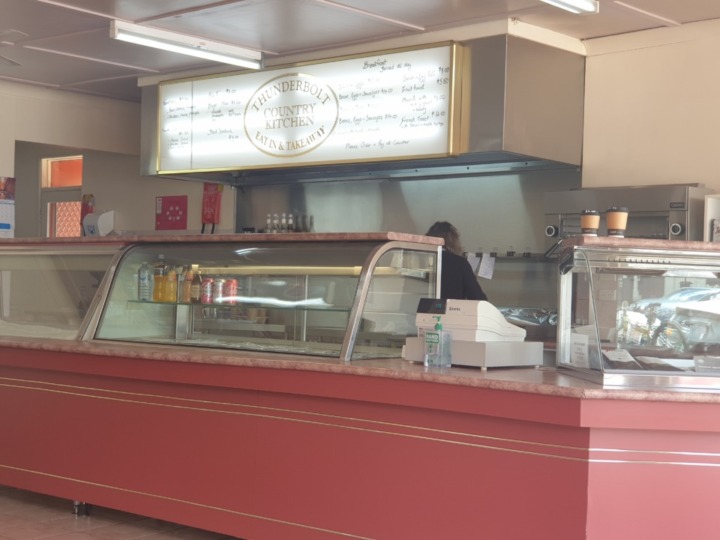 Oh, and while I think of it, a big shout out to colonial architects. 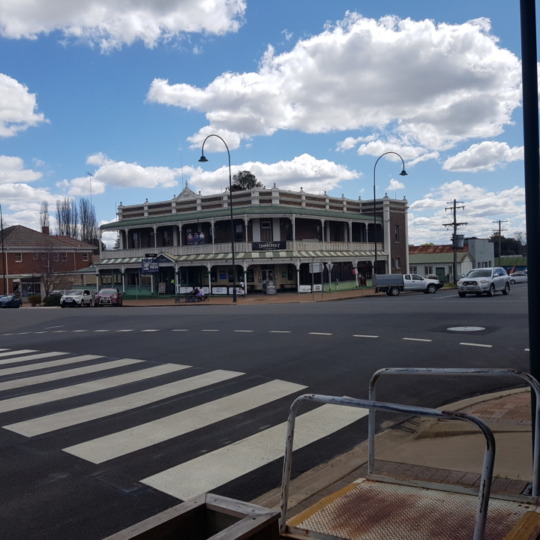 North on the New England Highway through Armidale and to Ebor, our destination at the end of Day 2. Ebor, at the bottom of the Waterfall Way, is a singularly unremarkable town, well, it is barely a town at all, actually. A tiny 24/7 servo, a coffee shop called “Fusspots” of which more tomorrow and a cheap and cheerful motel with 8 rooms and space out the back where grey nomads can camp for the night. The hosts are country-friendly people, the kitchen serves excellent food and the beds are comfortable, you really can’t as for much more. 328 kms for the day over some quality and enjoyable roads, happy with that.

On the subject of roads, the local councils are busting themselves doing copious amounts of road works. Keeping people in work, over the COVID crisis, I guess. But some are doing it better than others. One council’s idea of traffic control was a a set of  lights and a boom gate. OK, I can understand that. What I couldn’t understand was that, having obeyed the green light and proceeded ahead, we came over the crest of the hill to be confronted by a 16-wheel road roller on our side of the road and heading straight towards us! Now road tyres don’t like to change direction quickly on gravel surfaces that have a layer of slush on the surface just after the water truck has done a pass. Having sorted that out, (just), and moved to the right hand side of the road, around the next corner we encountered a grader, again on our side of the road heading straight towards us. I stress that there wasn’t one single council worker of any description in sight doing something about an atrocious bit of traffic management. Pays to keep your wits about you on country roads.

Anyway, that will do for today, Catch you tomorrow and thanks for you patience.