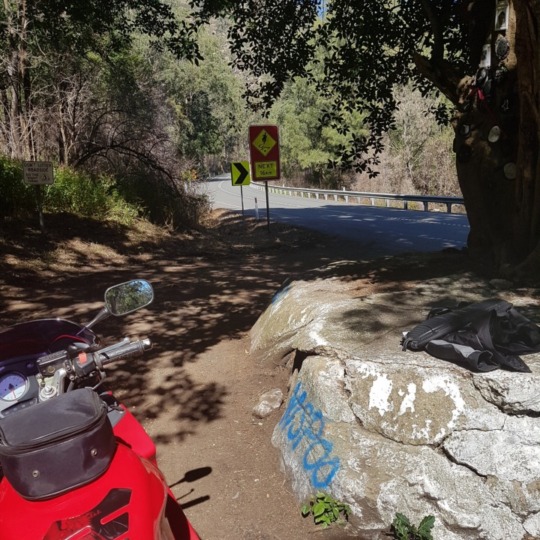 The weather forecast said it was going to be 25 degrees yesterday and it’s still Winter (actually it got higher than that), so it was a no-brainer to do a Putty run. It’s been March since I did anything more than an around-the-block ride on the VFR so it needed a good run to blow the cobwebs out. So did I as the longest ride I’ve done since March was the other week when I did The Lap on Bexie (around 160 kms).

Regardless of the daytime forecast I knew it would be cold to begin with so I dressed warmly. Better to be too hot than too cold. I met up with my good mate, Timmsy, on his Crossrunner and we headed off at 0730.

We’ve all had those days when everything went right and equally those when it would have been better to stay at home (I’ve documented both sorts here lots of times already) Yesterday fell into the first category. Along the flat heading out of Dapto the temp gauge said it was 9 degrees so my decision to dress well had already been validated. Funnily enough, heading up Mt Keira it had climbed t 15 degrees; I thought that was pretty weird. It stayed that way along the Picton Road as well which was quite strange. However, the closer we got to Picton the colder it got and it was back down to 8 heading through the town. Along the Oaks Road is stayed cool but, as the sun got up, so the temp started to rise. The road was pretty much deserted going our way but, in a scene that was to be repeated pretty much for the whole day, there were heaps of Harleys heading in the opposite direction.

There was a Highway patrol BMW sedan hiding in the bushes just after The Oaks, the first police presence I have ever seen on that road. We tootled on through knowing he wasn’t interested in us 🙂 We were gassed up so we didn’t stop at Silverdale where the petrol is always cheap. When we DID fill up at Windsor, it was 33 cpl dearer, in a big town, quite bizarre. Our charmed run came to a halt heading up out of Colo Vale (my favouritest set of twisties) a Winnebago holding up three SUVs then us. Oh well, you can’t win them all. Out on the flat we got blasted by a green P Plater in a V8 Land Cruiser who passed us like we were standing still (wish that cop in the BMW had been there). Then we passed a couple of tiddler bikes on the side of the road, one green plate, one red plate. About 5 minutes later said novice riders screamed past us doing 130 or so, rounded up the Land Cruiser which was a speck in the distance and disappeared completely. See above comment about cops in BMWs.

Grey Gums was packed with bikes as well as a muscle car club run, Toranas, Mustangs etc. I thought we’d be waiting for ages but Kimmie had 5 staff on and the orders got processed really quickly. Hot chocolate and some raisin toast and back on the road to the Ten Mile. I love playing the “numbers” game, this one was a beauty. 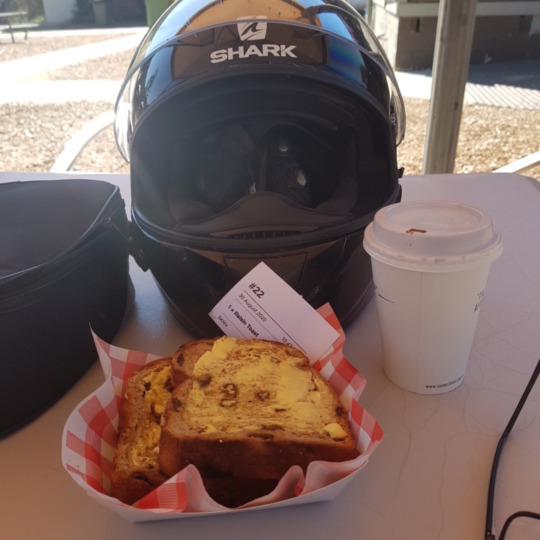 The bushland is recovering brilliantly from the bushfires and it’s very green. A pretty forgettable run through the Ten Mile, old mate in the Winnebago had kept going when we stopped and we copped him right in the middle. There is a small turnout about 3/4 the way through and he did the right thing but it was not one of the best laps of The Canyon.

The tyres were nice and warm when we got to the tree and we caught our breath before suiting up again. Just as we were getting our gloves on a big glut of traffic went by. “Bugger,” was Wayne’s response. So, we did what you do. Sat at the edge of the road with the engines running and eyes on our mirrors. It took quite a while (it probably wasn’t) before some southbound traffic appeared (a bunch of Harleys as it turned out). We gassed it up and pulled out in front figuring that, even if the cars in front were slow, we’d still get a reasonable run. It turns out that they made great time through and so did we. We left the Harleys well behind, had a clear run and didn’t catch the cars till we were out on the flat again at the other end, whoohoo.

We scooted straight past the Grey Gums, aiming for Colo Riverside for afternoon tea. And guess what? We encountered a dozy driver in a WRX Subaru who held us up all the way down the Colo, FINALLY pulling over to let us go by at the bottom of the mountain about 500 metres before we were due to pull over ourselves at the cafe. Sometimes you just can’t win!

Home made carrot cake and a milk shake and off again. The new Windsor bridge is open and it was a car park all the way from Wilberforce to there, stop, start, stop, start. I think everyone in Sydney had gone out for a drive. Once we cleared that we were good for the run through Penrith and down the backroad and home.

We left at 0730 and I pulled into my driveway at 1630. 580 kms of great roads, glorious sunshine and most of the traffic heading the other way. Did it tick all the boxes? Heck, yes, it did. Oh, with the caveat that my front tyre, which I knew was getting marginal before I left, turned out to be much more than just marginal. Not going to push my luck any more until it is replaced.

As always, Timmsy is a great travelling companion and it was a day that did tick all the boxes.