You are here: Home / News and Updates / Two steps forward 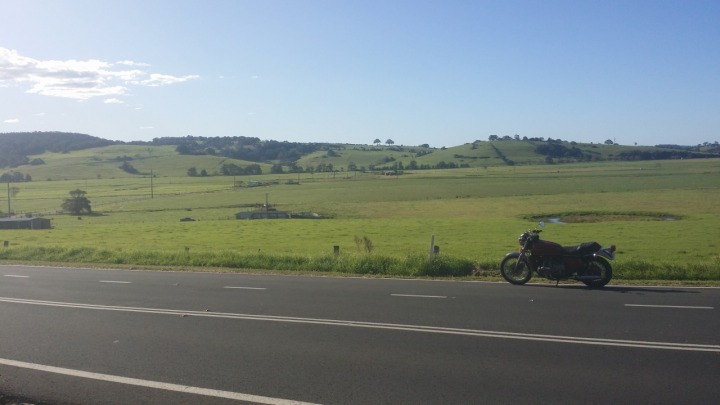 Well, I guess you’ve been thinking that I’ve died or been put in gaol or something. Neither these nor any other gruesome possibility has happened but I sure have been neglecting my blog and for that I am truly sorry. Fact is that, with isolation only just lifting, I haven’t been riding, see below, MotoGp hasn’t been happening and neither of the bikes requiring maintenance, also see below, there hasn’t really been much to talk about in my motorcycling world. I COULD fill the column inches with speculation about what may or may not happen in racing or, like some are doing, articles that border on the ridiculous just to keep the wheels turning but I haven’t.

Instead, I HAVE been doing a lot of things around the house and yard that have needed doing for a long time. When you are on a pension as my wife and I are, getting in tradespeople to do these boring but essential jobs is not a possibility so we have been tackling them ourselves. It is seriously amazing what you can actually do when you have to. Jobs need to be spaced out as you can’t just keep going till they’re done (well, at least we can’t)  and they have all taken far longer than we’d have liked, but they ARE done and there is a great sense of achievement in doing a major job and getting it done yourself.

As far as the bikes are concerned I have been keeping both batteries topped up by alternating the trickle charger between them and that has worked well. So, even though we have been allowed to ride for pleasure for the last couple of weeks, I have only been out once on the Gold Wing and that turned into a difficulty that is now resolved. Even though club rides are still not happening we are allowed to go solo riding using our 60 days Log Book days. Now my rego falls due in August and I have so far used 11 days of my 60 days on log book so I am in no danger of exceeding that and Goldie needed a run anyway. The weather was beautiful (how amazing that it’s nearly the end of Autumn and the daytime temperatures are still in the low 20’s) so we rolled out for a blat. Nothing fancy, just down to Kiama, Gerringong and back home through the back roads. However, a little problem cropped up that has been apparent before. The bike is very reluctant to start when the motor is warm, though it starts first hit when it is cold. And at an intersection in Kiama, I stalled the bike and had trouble getting it going again. I DID after about a dozen hits on the button it started like there was nothing wrong but it was still worrying.

So, when I got home I shared the issue with the guys and gals on the Gold Wing FB site and was told, amongst other things, that the starter button could be causing the problem. That seemed logical to me though I was pretty sure that Greg would have made sure it was OK when he did the resto. So, I pulled the switchblock apart and inspected the innards and they all seemed pretty much spot-on. BUT, when I went to reassemble I realised that, as usual, I should have left the well alone. Disassembling was easy, putting it back together with a tiny spring that needed to be held back while the pressure plate was re-inserted was proving to be impossible. No matter which way I looked at it, it seemed that further disassembly of OTHER attachments was going to be required if I wanted to get it back together. This was a route down which I was not prepared to go, having previously dealt with Honda pull-push throttle cables and the adjustments thereof. Grr. So I closed the garage and left it hoping that inspiration would strike another day.

It didn’t. So I rang my shop and explained the issue. They’d get back to me and let me know when I could bring it in. That was Thursday. I didn’t hear over the weekend but that was OK because I’d told them that there wasn’t a hurry. I organised a trailer and rang the shop on Monday asking if it was OK to bring her in. “Leave it with me and I’ll get back to you.” was the answer. Later in the day I got a call. Brad was on his way out in the truck to pick it up. Whoohoo. When he got to my place he asked to have a look. I’d put it back together because I knew that the switchblock had to be attached so that the bike could be moved but Brad said, “Just in case we don’t have to take it in, let me have a quick look-see.” The quick look-see took 20 minutes and, at the conclusion of that time it was all fixed and working. What great service. I am still going to have it looked out because I suspect that I have a starter motor or a solenoid issue still, but at least I can ride it and that’s a step forward.

So I have taken two steps forward but one back. I am a LITTLE further advanced than what I should be but not as far as I’d LIKE to be. It’s funny because, when I sat down to write today I was actually going to write an article about how Japanese manufacturers of racing bikes often do exactly that thing, take two steps forward and one step back; I guess that article will have to wait for another day.

As I have noted on many occasions, the isolation we have been enduring has provided the opportunity for many people to dig out their old racing photos and publish them. What a thrill it has been to see pictures that have been long locked away seeing the light of day. Here’s an example 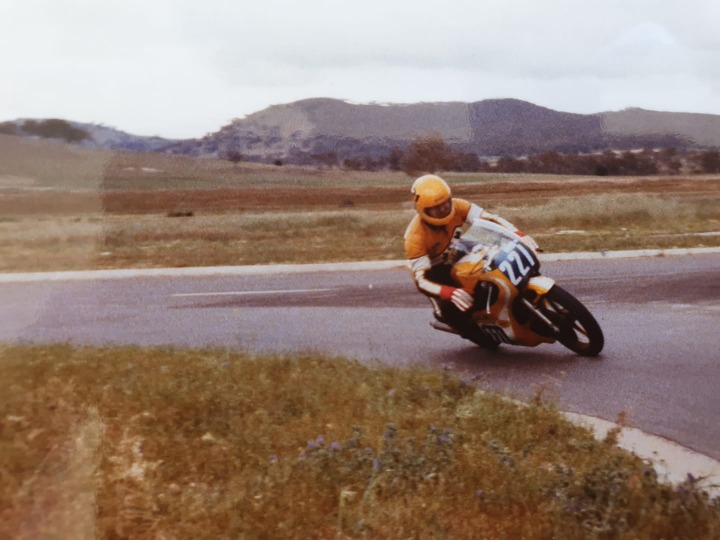 It’s John Vevers, from JCW Motorcycles and I reckon it’s the Macarthur Park finale, November 1981. Thanks to Warren Walker for posting this one.

Finally, I have been enjoying doing my song-a-day stint on YouTube and I am now up to day 51. If you’d like to check in with my YouTube channel you can see all of them there. I promise I’ll be back soon, really.