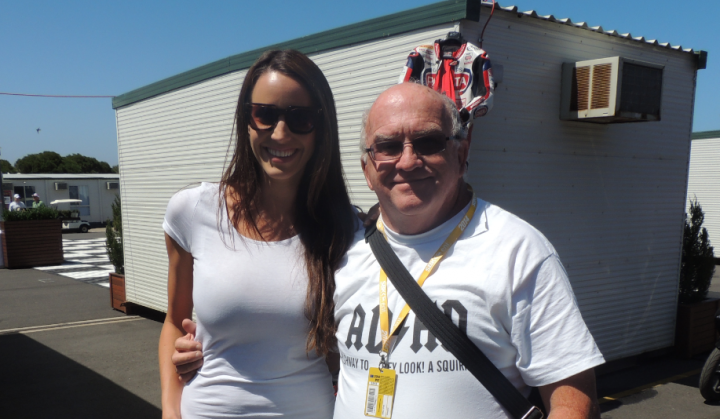 The cult of celebrity really does nothing for me but I must admit to breaking out every now and then. That’s me at the WSBK meeting at PI in 2014. Lauren Vickers, the Australian model. She was at the meeting as she was married to French rider, Randy de Puniet. She kindly agreed to have her photo taken. I was very grateful, she’s a very nice person. The featured image you have seen before, me and Fast Freddie Spencer at the Barry Sheene in 2015. I couldn’t NOT get a photo with my all-time racing hero, could I?

I guess all of us have our “brush with fame” stories so I thought I’d share a few of mine. Some of my famous people really ARE famous while some are just famous within our small group of motorcycle road racers and enthusiasts and some are famous just because they are famous to ME.

Outside of racing my contact with famous people has been pretty rare. My dad was able to meet the American evangelist Billy Graham back in 1959 when he first visited Australia and dad introduced the two of us to him. That certainly sticks in my memory. Before I started following motorcycle racing I was an avid car racing fan and I met many of the world’s great drivers when they came out to Australia on their visits for the Tasman Series. I was privileged to meet and talk to Sir Jack Brabham, Stirling Moss, Jimmy Clark and most of the top F1 drivers of their day.

Once I started following motorcycle racing my focus shifted to the “names” of that sport. Laverton was my first meeting and, though Agostini was there, I didn’t meet him, in fact, though I spent some time in the pits on the Saturday, I didn’t see him there. That honour was to be deferred for many years. For reasons that are totally unknown to me, I gravitated towards the Ron Angel/Jack Walters pit on the Saturday and watched as the crew fettled Kenny Blake’s brand new RG500 Suzuki. Ken was there and I remember saying hello to him and him returning the greeting. How was I to know that that that moment would lead on to an adulation that lives on until today, nearly 40 years since his death? But photographing the races brought me in contact with the cream of the crop and the up-and-comers as well. Photographing the races and selling photos to the riders and crew meant that I came to know most of them well.

Some became firm and fast friends, some just acquaintances but all stay in my memory. As a young photographer and conscious of the need to do and say the right thing in order to maintain my press credentials, I tip-toed around the A grader’s pits, after all, they were heroes, weren’t they? As it turned out, apart from observing the usual courtesies, the A grade riders were as approachable as the lesser lights were. I have never claimed that Gregg Hansford was friend of mine but we knew each other as acquaintances and he always had time to stop and say hi. Warren Willing was the same, though he was, perhaps, a little more intense and focussed, possibly because much of the preparation work on his bike was being done by him whereas Gregg had the amazing Neville Doyle in his corner.

Of all of the top riders, there is no doubt that the Kiwi, John Woodley, was a friend. I’d seen John race at Laverton, of course, though I’d barely noticed him as engine unreliability on HIS brand new RG500 put him out of the big race early. But John had an encyclopaedic memory for people and names, and, as his career took him overseas for long periods, there was always something that you could rely on and that was, if you saw John in the pits, no matter how long it had been since you saw him last, he’d stop what he was doing, stand up and say, “G’day, Phil, how are you going?” Our paths have crossed many times since and that has never changed.

Photographing the lower grade races and the club days as we used to do, meant that we got to see all the up-and-coming riders. I photographed Wayne Gardner’s first ever road race meeting in November 1976 at Oran Park and we have remained friends ever since. Despite the bad press that he has “gained” in the intervening time (most of it from people who are jealous of his success) Wayne has always made time to chat and it was great to see him and be photographed with him at the premiere of his movie here ion Wollongong a couple of years ago. I have a signed photo of him on the wall of my office and I see it every time I sit down at my desk. Robbie Phillis, Graeme Geddes, Johnny Pace and a myriad of others who made names for themselves were guys who I knew and followed in their formative years of racing.

There are other brushes with fame that are more recent. For example, it took till just a few years ago before I got the opportunity to meet my all-time racing here, Freddie Spencer but it was worth the wait.

Later, as the on-site reporter for MotoPod, I got to meet and spend time with nearly all the greats of WSBK and, to a lesser extent, MotoGp. The highlight of the WSBK experience was the chance to interview, at length, and TWICE, another of my racing heroes, Ron Haslam. He was everything that I hoped he would be and so much more. It was probably the highlight of my WSBK days with MotoPod. You may notice that I have few photos of me WITH these people. Funnily enough I have always found the practice of having your photograph taken with someone famous as a bit narcissistic although I have made a couple of exceptions over the years.

MotoGp is a “brush with fame” nightmare though there are some who make it their “mission” to do so. But getting into the paddock is notoriously difficult and access to the “stars” is strictly controlled even then. On that subject, the only WSBK rider who refused point blank to be interviewed or even SPOKEN to, was Max Biaggi. I later found that it wasn’t just me; he is apparently rude to everyone.

I was able to borrow a pit pass from a very good friend who was on staff at PI in 2007 and got so see both Chris Vermeulen and Anthony West, both of whom I had spotted at their very first race meeting some 10 years before and that was a real thrill. I much later got to interview Chris and what a pleasure that turned out to be. But my most valuable brush with fame in the MotoGp realm was when, for that brief 30 minutes that I had Rob’s pass, I was to meet up with a guy who I had known only online through a Stateside forum. Liam Schubert had parlayed his road racing passion all the way from San Francisco to Italy where he had scored a job with the PRAMAC Ducati team. He weekly reports on the forum of the inside MotoGp stories were solid gold and it was my main mission in being in the pits to find him and talk to him face to face. Fortunately I was able to do so and though his name is probably known only to me, I count this meeting as a very special brush with fame. 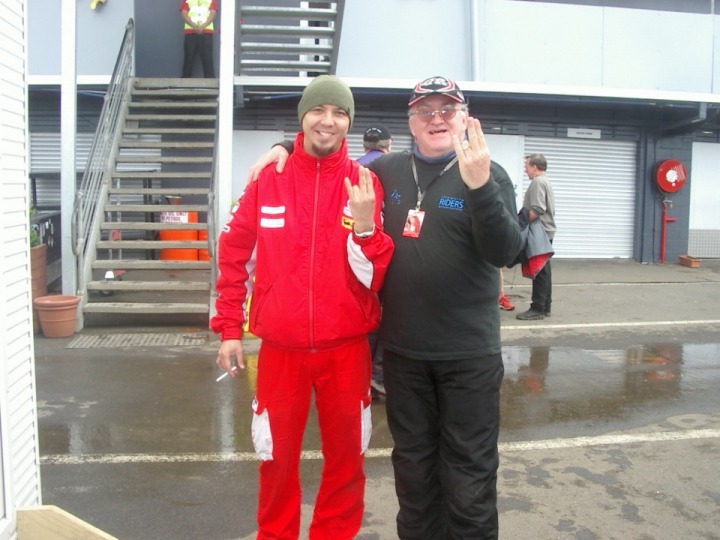 My passion for historic racing and my regular attendance at the Island Classic has brought me into contact with many more famous people, many of whom have, over the years become not only my heroes but also my fast friends. Foremost among these is Ralph Hudson, from California, the fastest motorcyclist in the world on a “sit on” motorcycle. Last time we met was just after Ralph had set the 399 mph world record in Bolivia. As I was interviewing him he said, “You know what, I was invited to the FIM Champions Dinner in Spain. All the champions from all the types of motorcycle sport were there. And, guess what, they sat me at the big table up front and seated me next to Marc Marquez. I was much too polite to say it but I thought to my self, ‘I’m FASTER than him'” Those of my readers who know Ralphie will be able to picture the look on his face as he said this and the twinkle in his eye.

But my most precious brush with fame was a pretty recent one. In 2015 the Barry Sheene Festival of Speed at Eastern Creek included as part of its programme, a honouring of Warren Willing. His old Chesterfield 750 Kawasaki was there as was Warren. I was horrified to see how the cancer had ravaged his body. Nevertheless, he performed his PR duties manfully despite it being apparent that there was a huge effort involved in doing so. Late in the afternoon I saw him and Alan Adams, one of his long-term sponsors, sitting in the Adams and Sons van. I approached and waited till they had finished their conversation and then I said to Warren, “Warren, you probably won’t remember me..” He cut me off and replied, “Of course I remember you, you’re Phil Hall,” and he reached out and shook my hand. I get goosebumps every time that I think of that moment.

What have been your brushes with fame?