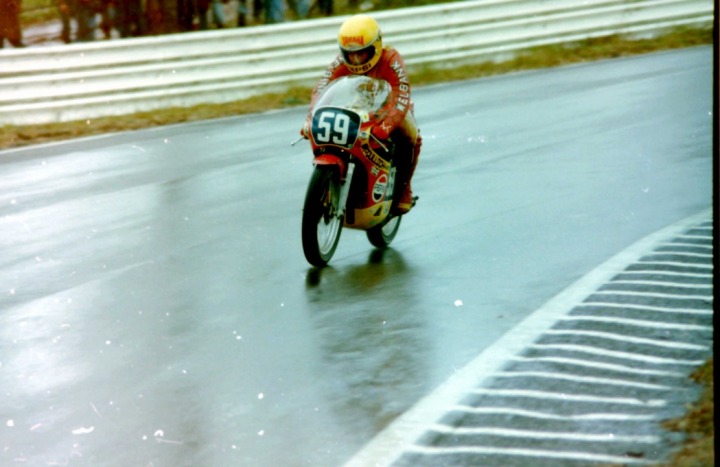 …between pleasure and pain, or so the pop song tells us. The saying is also true in many other areas of life but especially so in the case of motorcycle road racing. Please allow me to explain.

It was Bathurst, Easter 1978. My brother and I were there, cameras at the ready to record another, what we hoped to be, epic set of races around the iconic 6.2 Km closed public road circuit. The fields at the Bathurst races were huge as every road racer in Australia wanted to race at The Mountain. Just to give you some idea, the Unlimited C Grade event would regularly have a grid of over 100 riders, starting in a massed start, not in waves or pairs as was done at Daytona or the Isle of Man. If you were a no-name C Grader you could expect to be down the back and that meant that you were gridded ON Conrod Straight BEFORE Murrays Corner and BEFORE the actual main straight where the flag was waved. Just getting through the pack of bikes immediately around you was a nightmare and trying to sort your way towards the front of the pack was next to impossible.

As a photographer, Bathurst also presented its own challenges as I have detailed recently. So a different approach than what you would use at Amaroo or Oran was necessary. You still canvassed the pits asking riders if they wanted their photo taken (most did) and you noted the details in your programme. You took LOTS of film, two or three times as much as you’d take to any other meeting (except, perhaps the Six Hour) and you timed your shooting carefully. Traditionally riders wanted their photos to be taken in a race rather than in practice and qualifying but you “ran yourself in” so to speak by getting around and taking photos during the early sessions. It got you used to looking for numbers, colour schemes and figuring out what were the best places to use. It also had the benefit of actually getting a fair spread of shots as some riders, through misadventure or mechanical woes, didn’t actually get TO race.

Come race day, it was all hands to the grinders and it turned into a frantic time. Inevitably you missed some of your favourite riders for reasons like those I mentioned above or just that the packs of bikes coming by were so large that it was easy to do so. Usually I would use the first couple of laps just to take some group shots as these provide great “atmosphere”. Then, once the pack had thinned out a bit, I concentrated on getting the individual ones and trying to tick off my list.  And so it was that my photos of one particular race and rider, came to be and provided a perfect illustration of the title of my article today.

As you know, we had followed the career of a young Sydney rider called Ron Boulden since he first started arcing in April 1976. He was a great talent, had good equipment and good teachers, was keen to learn and had his eye firmly fixed on the prize. He arrived at Bathurst with two bikes ready to take on the smaller capacity races. The previous year the team had swapped out the 350 motor from the Maxton frame and into the new TZ 250 Yamaha frame because it gave them a better range of suspension set-ups (the Maxton was an older, twin-shock British frame and was getting a bit long in the tooth) The 250 engine went into the Maxton and, for 1978, Ron campaigned both bikes.

Competition in the small bike classes was fierce, handlebar-banging fierce, and Ron, being a relatively new kid on the block, knew that he’d have to bring his “A”game to try and defeat the stars, Quincey, Hammersley, Coleman and the rest. Come the start of the 350cc Grand Prix the worst scenario unfolded, it was raining. The bikes ran treaded tyres anyway but the choice of what to use if it was wet was very limited. But, as they say, it was the same race track for everyone, so suck it up and get on with it.

Wet races usually go one way or the other. Either everyone plays it safe and the race is a freight train of riders in a big pack going as hard as they dare OR someone finds that they like the conditions far more than they thought they would and they bolt off into the distance never to be seen again. The second scenario unfolded almost immediately. Despite a relative lack of wet weather riding experience, Ron came by my posse at Skyline in the lead and with daylight second. I couldn’t believe it. Each lap he stretched the lead till it was clear that he had the perfect handle on the conditions. 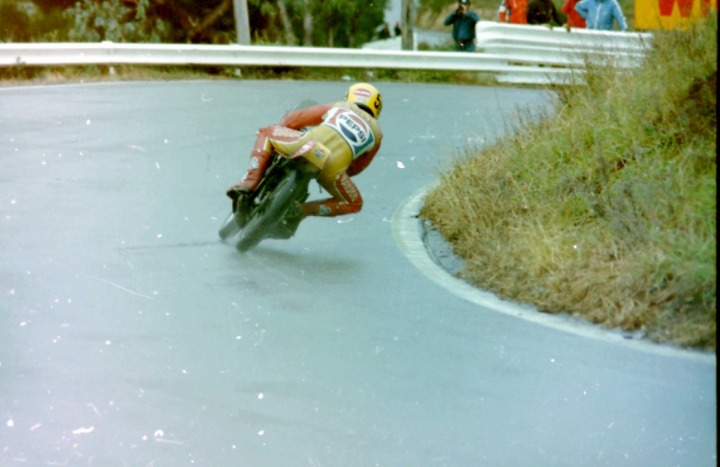 The race was his for the taking but…yeah, you knew there was going to be a “but”, didn’t you? On the penultimate lap with not a bike to be seen on the track from where I was standing, I saw a yellow flag waving at the marshal point down in the Dipper. It took a few seconds until it sank in. Only one bike had yet gone by. The yellow flag could only mean that Ron had crashed. And so it was. Braking gently for Forrest Elbow, the last corner before the run down Conrod Straight, Ron’s front wheel had washed out on the wet track and it was all over. Those of us associated with the team were devastated, of course, his chance of a maiden Bathurst victory was gone. So few riders could say that they had won at Bathurst and he had blown the chance. His mum, who was also his crew chief, was furious, his dad was inconsolable and we all felt like the kid who had had his candy taken away.

It took quite a while before the hurt of that day subsided. Thankfully Ron went on and, two years later, starred in the now-famous Unlimited Grand Prix when he defeated Graeme Crosby and John Woodley in a race that people still discuss in reverenced terms. I wonder how many times, in passing Forrest Elbow, did he think of the fateful day in 1978 when he crossed that fine line?