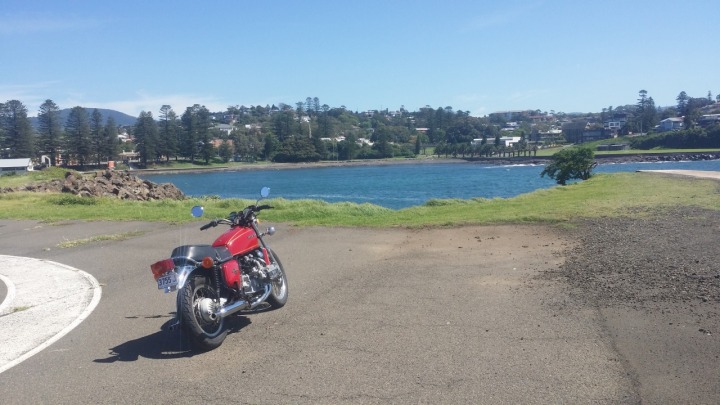 One of the aspects of the inter-connected world in which we now live is that presumptions about locations matter a great deal less than what they used to. How many of you find that, when you check your social media status in the morning, there are whole lot of responses that weren’t there when you went to bed the night before? It’s always fun, as an Australian, to wish my friends in the States for example, a happy birthday first because it ISN’T their birthday yet!

Nowhere is this quirky aspect of the internet more noticeable than when it comes to motorcycling. Here in Australia, we are roughly in the middle of Autumn while my northern hemisphere friends are in the middle of spring. Posts are being made about the “first ride of the season” or “getting the bike fettled for riding soon” and so on. And it’s always a salutary reminder of how lucky we are living where we are that we don’t have to put our bikes away for the winter with the prospect of not being able to ride for a number of months. Several of my friends live in Scandanavia and they are not yet out and riding. Indeed, my wife’s relatives in Finland have just started posting up pictures of the snow melting!

As well as the impost of not being able to ride for months at a time, my northern friends also have to endure the damaging effects of the salt and grit that is laid on the roads during the cold months to enable traction on the roads at all. Their bikes are old well before their time simply because all this mung is thrown up into every nook, cranny and crevice on their bikes and it stays there and promotes rust and corrosion that starts as soon as the new bike is taken out of the shed. Is it any wonder that the For Sale ads show practically new bikes at ridiculously low prices and looking far scruffier than a bike of their age should look?

On the other side of the coin, we, in Australia, don’t really have a riding season at all. Apart from a few isolated locations where the roads are not passable in the extremes of the Wet season in far northern Australia, for example, for most of us we can ride all year round. I lived for over 20 years in Canberra, well above sea level and with some mountains to the west that often became covered with snow in the winter but I rode through all the seasons like there wasn’t any difference. And I can’t say that I was able to do so because I had superior riding gear because, I can assure you, I DIDN’T! And racing of all sorts continues throughout all the seasons in most parts of Australia as well.

If I were to be asked the seasons that I prefer, I would, obviously, say autumn and spring. Summer here can be punishingly hot, with temperatures rising to the 40’s celsius. You CAN ride through summer and I usually do, but I try to avoid the extreme days for obvious reasons. Here on the coast, winter isn’t really an issue either and it is fun to watch the onboard temp gauge on the bike drop rapidly as I climb the escarpment up onto the Southern Highlands then start rising again as I head north.

In Canberra there are some well-known areas where black ice would accumulate, most notably next to the lake in the shadow of Black Mountain and we learned to watch out for them. I once rode from Canberra to Wakefield Park near Goulburn (another noted “cold hole”) only to find when I got there that my visor was encrusted with ice as was my fairing and my jacket. It didn’t SEEM that cold but it obviously was 🙂

Of course, discussions about riding season and, indeed, riding of any kind, is nonsense at the moment but, you can be sure that, when the restrictions are lifted, I will be riding regardless of WHAT season it is.

Please do the right thing and be here safe and well for when the time comes to ride again.