For any motorcycle road racing enthusiast in the 70’s, Easter meant only one thing, a trip to Bathurst for the annual motorcycle racing carnival. For most of us the two most important dates on the calendar were Easter and the 2nd weekend in October; all racing activity revolved around those two dates.

I was one of the many and my first visit to Bathurst was 1976. With a new SLR camera and a long lens (300mm preset telephoto ha) I photographed from the spectator stands, not really knowing what I was doing but hoping for the best (“All the gear but no idea.”)

It was a day trip for me, just the Sunday as my wife was still in hospital having given birth to our daughter the weekend before. As with every Bathurst novice it was a revelation. I mean, I had been watching the Bathurst CAR races for over 10 years on TV so I knew which way the track went, the names of the corners and straights and all that technical bumpf but TV “flattens out” the elevation changes and didn’t prepare me for how vast the track was and how totally isolated you were from the “whole track” experience the track was compared to the little tracks like Oran Park and Hume Weir. Here something major could be happening just a little away from where you were standing and you’d never know about it. Often you NEVER got to know about it. Sure, the commentators tried to keep you informed but even they were hampered by there being vast sections of the track that they couldn’t see from their elevated viewpoints. I was to find out later just how difficult commentating “The Mountain” was.

But it was a thrilling day. I saw Ike Takai take the “works” OW31 to an emphatic victory over the local favourites, Willling and Hansford and was overwhelmed at the sight of the tiny Japanese rider climbing up over the tank trying to keep the Yamaha from flipping over backwards when it got airborne over “The Hump” Somehow I managed to photograph from both the top and the flat that day, man I must have walked MILES.

Then, just as the main race was finishing a storm broke over the mountain and it pelted down rain. I sprinted for the car which was parked in the car park on the outside of the main straight. I managed to keep my camera dry but, by the time I got to the car I was soaked. Fortunately, Renault 12’s had extraordinarily effective heaters and well before I got home to Wollongong I was bone dry and comfy.

By the time 1977 rolled around I was already a pretty experienced photographer and reaped the benefit of my growing reputation, securing a much-prized Photographer’s Pass. This not only allowed me to get much closer to the action and to access areas of the track that were off-limits to spectators but also gave me access to the mini bus that the ACU provided to ferry working members of the Press around the track in between races. I was much better prepared and took a lot more film with me as the scale of the meeting was now a lot clearer to me.

For the next 5 years I photographed every Bathurst meeting and expended large quantities of film. Just scanning my Bathurst shots took weeks when I started doing that in 2011. I also knew most of the NSW and Victorian riders pretty well by 77 and even many of the interstate riders, many of whom only ever ventured to NSW once a year. It didn’t take long to figure out that EVERYONE wanted to ride Bathurst. You rode your own bike/s and you begged, borrowed and (almost) stole every bike you could so that you could get in as many rides at Bathurst. In 1977 the Kiwi ace, Graeme Crosby rode a 125, a Production Kawasaki Z1, an Improved Production Z1 and a TZ 750 Yamaha. He probably would have ridden more bikes if he had been able to secure them.

A month or so before Bathurst, WDMCC hosted a pre-Bathurst meeting at Amaroo Park. Here was the chance for your last hit-out before Bathurst and there were riders and bikes on show at that meeting that you only ever saw once a year. Riders like Jim Smith, for example, rode his immaculate TZ750, and those were the only two times you saw him, Amaroo before Bathurst and Bathurst.

On my first visit in 1976 I had the chance to observe how the other half lived?? on the top of the mountain and, from then on, I kept well away from the louts and concentrated on getting good shots. Basing myself in the pits was a good move because it gave me good access to the riders (though just getting around the pits themselves was a trial) and to the mini bus. The Bathurst event became a 3 day event for me from 1977 on. We were very lucky with accommodation because my brother was in the Army at that stage and organised for us to stay at the camp at Lithgow and drive in each day. When you clambered, climbed, went over and under fences and walked a lot all day, having a warm, comfortable bed at night was essential if you were going to do your job properly.

And a job it was. In order to offset to some extent the expenses involved in going to the races, Paul and I took photographs and sold them. Before the races we’d go around and ask riders if they wanted photos of themselves and we’d try to get them out on track and sell them the photos at the next meeting. As well we would get around the pits with our proofs from the previous meeting and sell photos to riders who hadn’t asked but were always happy to have pictures of themselves racing. Photography was very expensive with film and processing costs being a big component of the weekend’s expenses. For a Bathurst meeting I’d probably take 6×36 exposure colour films and the same amount of black and white films. The only other meeting that demanded that sort of commitment was the Six Hour. 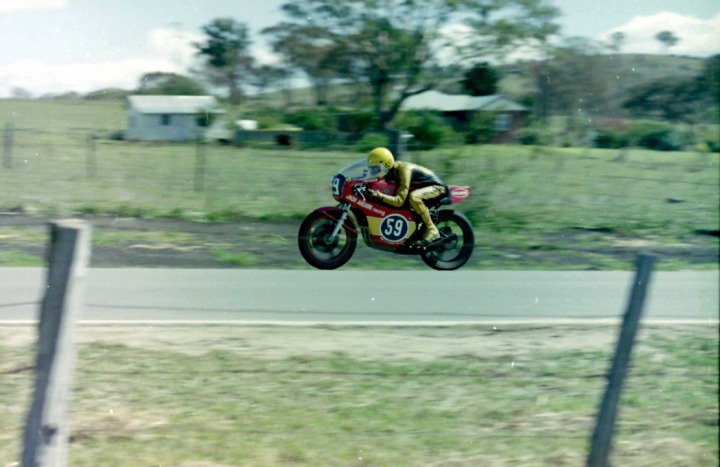 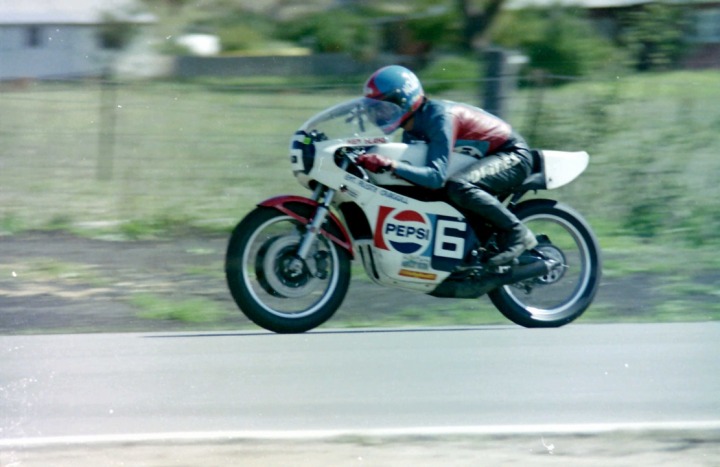 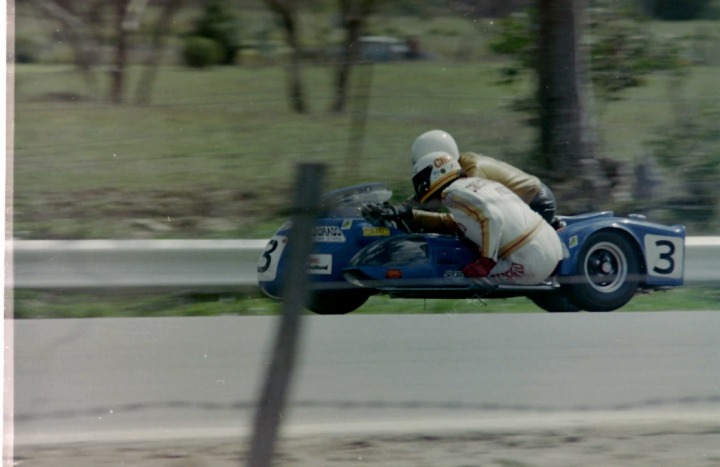 Being able to get closer always led to better shots. These are from 1977.

My love affair with Bathurst soured twice in succession a few years later. Easter 1979 saw the death of Australian racing icon, Ron Toombs. Having a “comeback” ride on a bike he’d never ridden before on modern slick tyres with which he was unfamiliar, Ron died on Easter Sunday morning (how ironic) and his death plunged the tight-knit pit full of fellow riders into deep despair. No matter that it was later found that he had suffered a heart attack; it was some consolation that the champion had not made an error, but a tangible link to the great days had been broken. It was a Bathurst tradition that a death during the racing was never announced until the day’s racing was over. Many of the crowd had left by the time that Will Hagon performed this thankless task.

Then on the fateful Easter weekend in 1980, 40 years ago, the track claimed two lives, lives of two guys who I knew well and respected. On Saturday, Ian Dick lost control of his Kawasaki 1000 and veered off the track going down Conrod Straight. The bike hit a concrete culvert hidden in the grass and Ian died from injuries sustained. Then, on Sunday, while I was commentating with Will Hagon in Main Commentary, Rob Moorehouse crashed his TZ750 at Skyline. Rob was thrown from the bike and crushed to death under the unprotected armco fence. Every death is a tragedy but the worst part of both of these tragedies was that neither Ian or Rob were racing for major placings and they knew it. They were, just like the majority of gladiators who took on the mountain, just out there to have fun and to be able to say to their kids one day, “You know, I raced at Bathurst.”

Of course, there were highlights. Watching Tony Hatton win a sodden Production race on Sunday morning in 1979, humiliating the best riders in Australia with his peerless skill in the wet. Watching Mick Cole win the Arai endurance race with an EverReady Magnetlite torch taped to the front of his bike because the rules said that the bike had to have an “operating headlight” Mick’s Honda was no doubt running a total loss ignition system and, late in the race the on-board headlight started to fail. Tensions between manufacturers ran high back then and the Honda Team found out that another team was planning to protest Mick’s bike for defaulting this rule. So he was pulled in to the pits, the domestic torch was duct-taped in place and he went out and on to win the race. And then there was the amazing Unlimited Grand Prix on Sunday afternoon of 1979, the three-way duel between Ron Boulden, Graeme Crosby and John Woodley that has gone down in Australian motorcycle racing history.

So much to remember, but, you know what, some of my best memories are of that happened OFF the track? The jokes, the camaraderie between riders, the smell of bacon cooking over an open fire in the its on a Sunday morning as the Bathurst mist began to lift; long crocodlies of wives, girlfriends and children in their pyjamas toddling off to the ablutions blocks with a sponge bag under their arm and toothbrush clenched in their teeth; open heart surgery being performed by weary riders and crew, the bike lying on its side in the dirt while repairs were made; the sound of the first bike starting up early, and I MEAN early, as racers prepared for the day, so many memories.

For most riders of the era, Bathurst was the rite of passage. As at the other major iconic race, the Isle of Man TT, just being able to say that you had finished a race at Bathurst gave you cred; it lifted you above your peers. And, if you’d PLACED in a race there, well, that lifted you up another notch.

Sadly, the Easter bike races are no more. The last one was 20 years ago, yep, 2000 was the last time that the mountain echoed to the sound of racing bikes. At regular intervals the sabre is rattled about getting bikes back to Bathurst but it won’t happen. The track is now so completely configured for car racing that it would be even more diabolical for bikes now than it was then. Those of us who saw it in its great period and those who dared to try and tame it now only have memories and, I am very pleased to say, lots of photographs. Whether it is the lockdown or not, I don’t know, but this year there has been an explosion of people publishing their old Bathurst photos on social media. It truly has been an Easter to remember.

I count myself privileged to have been to Bathurst and seen the bikes race; there will never be anything else quite like it.