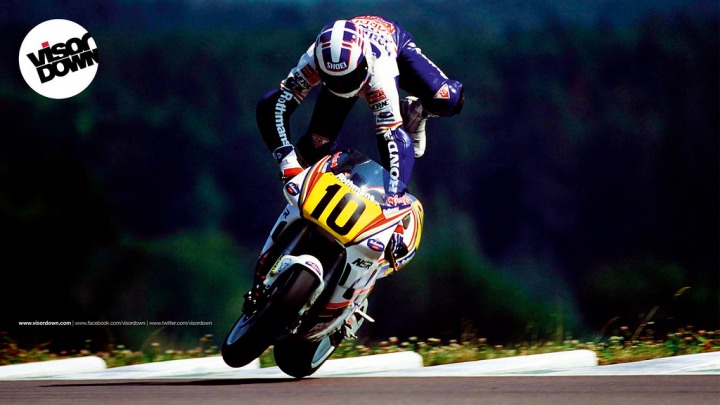 On a fairly regular basis (too regular for my liking) the question arises on social media of who was the best grand prix racer of all time. It’s irksome because there isn’t a definitive answer nor can there ever be. Comparing different riders from different eras who raced on different tracks riding different bikes under different conditions provides a myriad of reasons why the question can never be definitively answered. Even just ONE of these many criteria is enough to make answering the question difficult, if not impossible.

Nevertheless the argument rages on and, once someone with a brain actually points out the above and brings the speculation to a conclusion, the argument moves on to the subtext of the first question, that is, “How would today’s grand prix riders manage if they were racing the fearsome 500cc two strokes of twenty years ago?”

Regardless of the fact that this question is just as pointless as the original one for exactly the same reason, hours of keyboard time, mountains of research and limitless amounts of hot air are expended on a fruitless search for the answer.

It usually goes something like this. The original poster (usually an old fart around my age who remembers the glory days of Lawson, Gardner, Rainey, Schwantz and Doohan) will say, “Well, I don’t care how good …..(insert name of the current GP hotshot) is, he’d have never survived in the 500cc era. Modern bikes do all the riding for you with all the electronic aids. So and so would be highsiding all over the place if he tried to ride one of the old bikes because he hasn’t got all that help.”

Quick definition for the uninitiated. Wikipedia, whose definition will do for a working hypothesis, says, This (a highside) generally happens when the rear wheel loses traction, skids, and then suddenly regains traction, creating a large torque which flips the rider head first off the side of the motorcycle or over the handlebars. The initial traction loss may be caused by: locking the rear wheel through excessive braking. It looks pretty much like that famous picture of Wayne Gardner (courtesy of Duke Media) that we all know so well posted at the head of this article.

Anyone who watches or has watched road racing will have seen it happen and winced as the painful process unfolded.

So, let’s dispense with the first question. Your definition of who was the greatest is impossible as I’ve said but, for me, it has to be Hailwood simply because he competed over a long period and was triumphant on a wide variety of bikes, often riding two or three different bikes on the same day. Given the marginal nature of the tyres in the day, the ridiculous speeds that the “works” Hondas achieved especially, and the hideously dangerous tracks on which he and his peers raced, I don’t think anyone will ever come close to his combination of versatility, success and courage. Mine is a subjective judgement as much as anyone else’s will be but I’m happy with it.

The second question is also impossible to answer but I’ll give my opinion anyway. I believe that any of the top 5 of today’s grand prix racers would have been as successful on a 500cc two stroke GP bike as they are presently on 1000cc fourstrokes. The reason is simple. Brilliant riders are brilliant riders regardless of what they ride. The millisecond reaction times that they demonstrate today is a characteristic that the “best” exhibit and will always exhibit.

The ability to learn a bike’s characteristics and get the best out of it is what separates the best from the also-rans and again, the current top echelon demonstrate that ability week in and week out.

Many of today’s “aliens” have graduated through the junior ranks which required them to spend time riding two stroke motorcycles so all of them have had experience with the “light switch” power deliver of a “smoker” and they learned to tame it as the rest of their peers did. Some of the riders who graduated through this “school” will say that the 250 was a harder bike to ride than the 500 was as it was so hard to get the best out of it.

Leaving aside the question of electronics for a moment, the power-to-weight ratio of a modern MotoGp bike is pretty much the same as a 500cc bike of the mid-90’s (200bhp and 130kg, 250bhp and 160kg). For the purposes of comparison this should do. So, today’s riders are riding bikes that are similar in this regard.

“Well, there you go,” the oldies will say, “The modern riders are getting it easy compared to the 90’s. They have all that electronics to help them control that power. The old 500cc riders have to control that all by themselves.” However, this is ignoring several important considerations. Back in the day the 500cc grids were vastly larger and the number of highsides was huge. Even the best riders were being spat over the top with monotonous regularity. Evidently the old riders DIDN’T control the bikes very well at all, even the best of them. Why is this? Well, as we have seen, it has nothing to do with power. It does, however, have a lot to do with power delivery. We are being constantly told that the two strokes were vicious things that would bite the unwary. Well, then, why is it that the old bikes that are being still ridden in racing today don’t seem to have that characteristic?

There are dozens of TZ750s still being raced in historic racing whose engines are developing a great deal more horsepower than they did in original form but the incidence of highsides is very low. Unfortunately, the 500’s of the era are so rare now that they only make appearances in “demonstration” form, but the comparison is still fair. So, what gives?

So, where did the “evil” reputation develop? Was it a matter of how powerful the bikes were or was it far more a factor of the rudimentary tyres that were used in the day than the characteristics of the engine and the chassis? As noted above, the speed and tractability of period bikes from the day that are still being raced today seems to be impressive but they ARE running on modern rubber. Dave Crussell, who has a stable of TZ 750’s swears by them and praises their power, handling and predictability.

So, yes, the old “smokers” were a handful and they were prone to launching their riders. But does that mean that modern riders would have been unable to tame them? Of course it doesn’t and to say so is arrant nonsense. A couple of years ago Scott Redding got to ride Kevin Schwantz’s RG Suzuki at Spa. What was supposed to be a “demonstration” quickly degenerated into a full-blown race and Redding ended up finishing a close 2nd after coming from a very lowly grid position. This on a bike that he had never ridden before. What did HE think of the bike? He LOVED it and said that he’d love to go back to racing the two strokes all the time!

During his GP career, Casey Stoner was very critical of the increasing use of electronic aids and admitted that he often rode with a minimal level of “help” because he believed that he could race better that way. And he didn’t do half bad for a little kid from the backblocks of the Hunter Valley!

Now, what about today? Well, the first thing that must be noted is that the current version of the “spec” ECU specifies a far less sophisticated and intrusive level of rider aids than has been the case in the past. Yet riders are still breaking lap records, shaving significant amounts off their previous best and staying (for the most part) on the bike.

Because, you see, just like Lawson, Doohan and Gardner, the current crop of superstars are just that, superstars. To denigrate their performances by saying that they wouldn’t be able to do what they do without electronics is an insult and is one that is usually levelled by people who have no first-hand perception of what it takes to perform at the highest level. Do the riders appreciate the electronic “help” that they get? To a degree, of course they do. Would they be happy to do without as Stoner suggested? You’d have to ask but my bet is that they would. Why? Because, in the contest between man and machine, the best of men will always rise to the challenge. Would they do as well without electronic aids as they do with them? Not to start with, of course. But if all electronic aids were banned for 2021 the racing would not suffer. The great riders would adapt and they would still win, because that’s what the game is all about.

Which brings us back to who is the greatest. Who is? They all are great and you can’t determine the question unless you put them all on the same race track on similar equipment and tell them to go for it. Anything other than that is futile speculation.