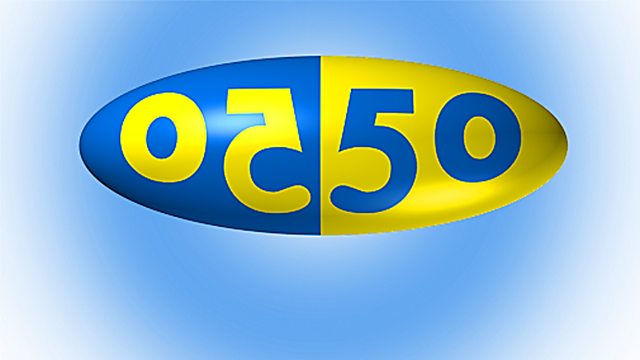 They say that people who have more birthdays live longer. I guess that’s true because I’m coming up to my 71st shortly and I have lived a long time, it seems. A friend of my dad’s summed up my situation well when he said that he wasn’t old, he’d just been young for a long time. I like to think that this applies to me.

So, in this “nought” year, years to which my wife’s Finnish relatives attach great importance, I am celebrating a number of anniversaries that are all important to me for one reason or another. I hope you’ll bear with me if I babble a bit today because the subject, like most that I seek to explore, has expanded in scope the more I have thought about it.

So, what happened in 1970 that is worthy of note? I’m going to treat them in chronological order though you will quickly see that this is NOT the order of IMPORTANCE.

In early March 1970 ( think it was the 6th) I bought my Maton guitar. Now I’ve told its story often so I won’t repeat it in detail. It was a choice between a Gibson and a Maton and I bought the local product. It was significantly cheaper, had vastly better build quality and was Australian made. I still have it and it sounds even better, 50 years later, than it did then. I used it recently at a concert, using a clip-on pickup and it sounded fantastic. For its 30th birthday I sent it back to the factory for a check-up and they returned it saying that it was in outstanding condition and should last me at least another 30 years if I continued to look after it as I obviously had for the first 30 years of its life. I intend to. 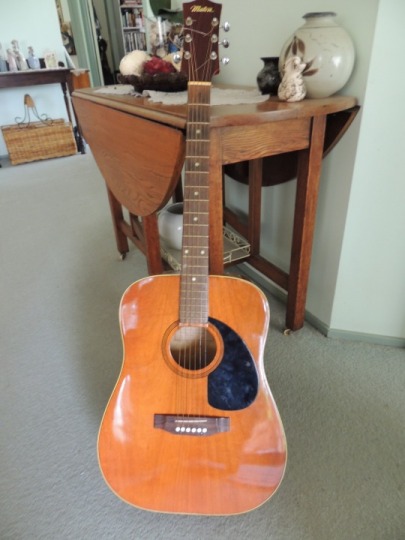 The second “50” is that also in March of 1970 I got my driver’s licence and bought my first car.  I could make these separate items but combining them seems logical. I was actually pretty slack about this, I could have gotten my licence in 1966 but it never seemed to happen. Commuting from the other side of town to teacher’s college should have hastened it but I had a reliable lift each day from a fellow student so it didn’t seem to be that critical. However, as noted in December, in that month of 1969 my dad passed away and there was his car sitting in the garage doing nothing. Mum didn’t have a licence and what to do with it was a bit of a quandary. So I decided to buy it. Mum could have and should have just given it to me but that wasn’t the way mum worked so I paid $100 and the Hillman was mine. It was green but a mate took care of some rust and resprayed it for me for a ridiculously small amount so who was I to complain? Having a car meant getting my licence (finally) so that’s what I did. The old HIllman lasted me a year or so till it finally ground to a halt, but I loved it and it was the first of my (many) cars over the years. 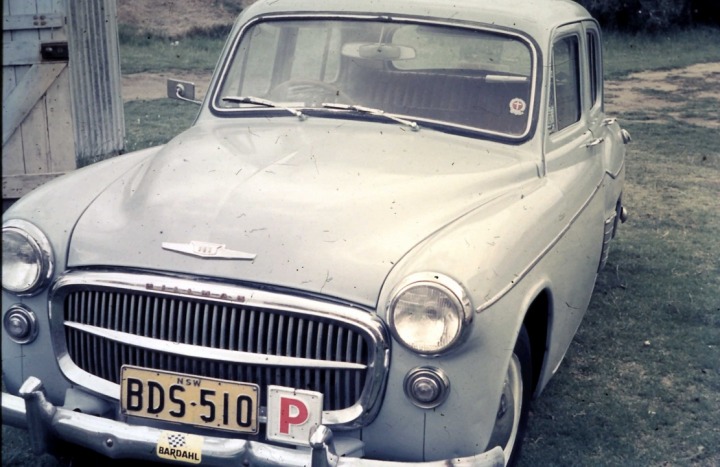 The 3rd “50” is the most important. In July of 1970 I met the girl who stole my heart and has kept it locked away ever since. At my local church there was a very active youth group and lots of social activities took place. I was busy studying at college (my continuing good grades in my tests and exams keeping me out of being scooped up and sent off to army recruit training, so the incentive to excel was great) and didn’t really have much time for gallivanting. Added to which I was pretty shy, skinny and wore thick glasses so I didn’t really fit in with the crazy scene at the time. Then one day I noticed a girl pull into the car park in a big Chrysler Valiant, a most unusual car for a girl to be driving back then. She was quiet, seemed a bit shy like me, had a winning smile and, most of all, seemed very dignified and ladylike, unlike most of her peers. The attraction was immediate and it was only a very short time after that that we started going out together. She was a great driver (definitely another plus point for me) and we seemed to have so much in common as well. Her mum and dad, old-skool Finns, were VERY protective of their precious daughter (and justly so) but I managed to sneak in under their guard somehow and gained their approval as well.  Two years later we were engaged and were married in 1973. In three years time there will be an ALMIGHTY “50” when we celebrate our 50th wedding anniversary. 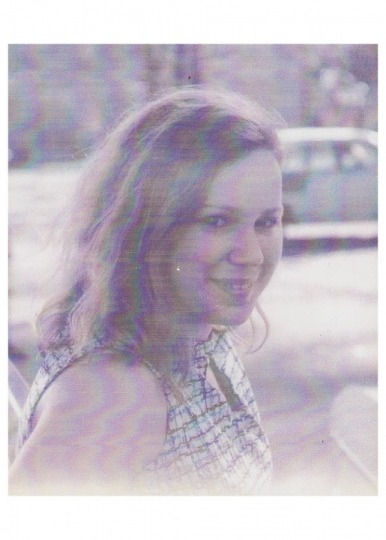 This photo was taken in Canberra on the October long weekend 1970.

Then, lastly, in late 1970 I took a big step forward in my musical life. As previously noted, I have been singing for most of my life. My mother sang well and passed on the genetic blueprint (my father, on the other hand, boasted that he had a voice like a lawnmower!). So Paul and I often sang at meetings and house parties and other social events and that continued once we went to school. I sang in school choirs right throughout my primary school years and on into my high school days when both of us were very proud members of the choir at Booragul High, the best co-ed high school choir in the Hunter region.

When dad was moved to the Illawarra, we were chagrined to find that Oak Flats High School didn’t have a school choir at all, this was just not acceptable. So we went to the music mistress (as she was known then) and asked her if we could start one! She was a bit taken aback but agreed that, if we could show there was enough interest amongst the student body, she would see what she could do. It soon transpired that there was MORE than enough interest so we started a choir there, too.

When I started teachers college in 1969 everyone did some music for the first year of college. We were made to learn the recorder (of which less said the better) and we sang in a combined student choir for all the special events. This was my bread and butter, an SATB choir of over a hundred students, it was fabulous. I was a bit disappointed when the conductor, Keith Baxter, put me in the Tenor section, though. I argued that I had sung bass for the last six years but he was insistent. “You have a tenor voice,” he said, “and, anyway, we have heaps of basses but not enough tenors.” Pragmatism mixed with a keen knowledge of music. I took to singing tenor just as easily as I had to singing bass and found that my register was really more than adequate to enable me to sing either should the need arise.

At the end of 1969 we were required to choose our electives for 1970 and I, naturally, chose Choral Music. I couldn’t read music (still can’t) but I knew that I could fall back onto my usual subterfuge of learning my parts off by heart and I continued to do this (I also passed all my recorder exams using the same wheeze, by the way). Now it was choirs but also small group singing as well and with much more complex and demanding material. It was tough but I have always thrived on the sense of achievement when a song sounds “just right”.

Then, at the start of 1970, Keith Baxter announced that we were going to stage an opera. Now I have never been an opera fan. My music teacher at Booragul High, the great Bill Turner, used to say that, in opera, when a person gets stabbed, they don’t bleed, they sing! I knew right from the start that we wouldn’t be doing Verdi or the like but at least I hoped I’d like the music. Well, it wasn’t Verdi, that’s for sure, and I HATED the music. It was a 20th century piece by an Italian composer called Giancarlo Menotti. The story was about a poor family whose little boy was a cripple. The Three Wise Men visit their cottage on the way to Bethlehem and a miracle takes place whereby the little boy is healed. Pretty standard stuff.

Learning the part was taxing. Keith knew that I (still) couldn’t read music but, so determined was he to make sure I had the part that we spent many hours in one of the practice rooms while I laboriously learned my part off by heart. What a fine man Keith Baxter was. Then we had to STAGE the show. One of the English lecturers, Vince Rees, was a noted thespian in Wollongong and he whipped us (almost literally) into shape to the point where we were prepared to open. From memory we had two shows, one in the afternoon and one on the next evening and that was it. It was a major achievement but the show was well received and we were much relieved when it was over.

Here’s a photo or two that my (then) girlfriend took of the dress rehearsal. 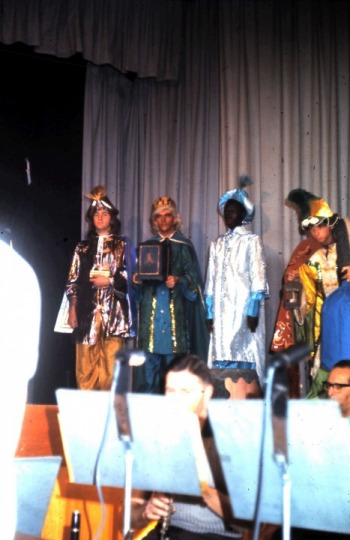 Ray Yates, me and Ambrose Bolla. We wore stage beards on the night but they were so hard to attache and then remove afterwards that they were not used for the rehearsal. I didn’t enjoy the music, too modern and atonal for me. I enjoyed playing Marco in the college production of “The Gondoliers” the year after much more 🙂

So that’s a few of the 50’s that are going to dot this year. Thanks for reading.