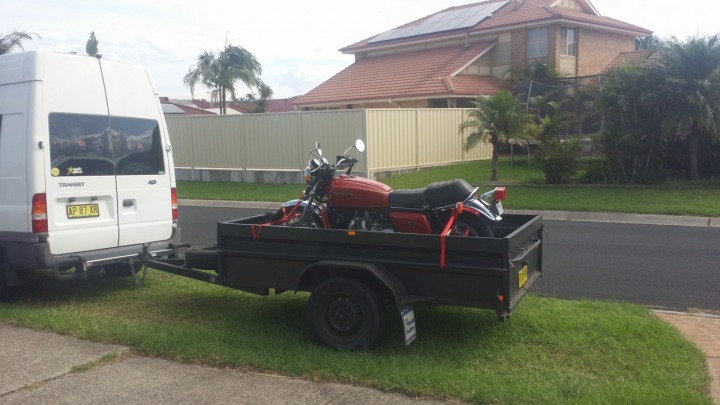 On Tuesday I journeyed back to Canberra to pick up Goldie from Greg’s place. It seems like quite a while since I again entrusted it to his care for some more fettling, and, indeed it was, even longer than I had thought. When I took the bike down there was a quite a long list of things that the first shakedown runs had revealed and I stressed to Greg that I wasn’t in a hurry and that he should get it done as he could rather than as a matter of urgency. There were two main reasons for this. Firstly, Greg rebuilds bikes as a living and I knew that, over the summer months he would be busy, and needed to keep the paying jobs ticking through. The second reason was also due to money because I knew that my job would be fairly expensive and I would need time to be able to save up for it. I have to add that I am well aware that everything that Greg has done for me has been at “mates rates” and for that I am hugely grateful.

The main thing that really needed doing was the front brakes which were diabolically bad, barely pulling the bike up at all and requiring Charles Atlas levels of grip on the lever to achieve retardation. Greg well and truly solved the problem with a new master cylinder, new brake lines and pads and, wow, what a difference. Also needing attention was the charging system which showed from my little voltmeter that the alternator was over-charging. Greg also resolved the issue with a thorough check over the wiring system and diagnosis with the right gear that showed that the alternator was charging correctly and no damage to the battery had resulted. Replacement of all fluids was required since the motor hadn’t been started for many years and needed a good flush.

The headlight was not working and the indicator switch was very dodgy, a very safety-related issue. But the main performance-related issue was that the bike just wasn’t performing like a 1000cc motorcycle should. I purchased a complete carburettor overhaul kit comprising all new everything and Greg fitted it, tuned the engine, balanced the carbs and returned the bike to me with the promise that it would go like it should. Does it? Heck, yes, it does.

The thorny issue of the neutral light was not resolved, nor did I expect it would be. After taking the bike to Canberra I did some research and found out that the switch is actually INSIDE the engine case and can only be accessed if the motor is removed from the frame and the cases split. Dumb design, Mr Honda, sorry. So I am learning to ride with the neutral light on all the time and knowing when I am in neutral by FEEL rather than light. It sounds tricky but it’s not as bad as it sounds.

To say that I am thrilled with Greg’s diligence and care is a huge understatement.

So today was my first chance to get the bike out and ride it. My last ride was in October 2019, I was really surprised that it has been that long. Anyway, I suited up, rolled Goldie out of the garage, fired her up and let her idle on choke while I got my gloves and helmet on. However, you just knew there was going to be a “however” didn’t you? just as I was about to hop on the engine died. Despite my best efforts it failed to fire again, man how frustrating. I didn’t even take any notice of the fuel gauge as it is notoriously unreliable anyway but I did start to think that I could be low on fuel so I popped the fuel cap. Damn, there was plenty of gas in the tank.

Just as I was about to give up the lightning hit me. This bike has a manual fuel tap!!!!!!!!!!!!. And, guess what? Yep, it was in the “off” position. There had been enough fuel in the carbs for it to START but not to keep going. I selected “on” and she fired up at the 2nd hit of the button and I was good to go.

I decided that I’d do a highway run up to Bald Hill overlooking Stanwell Park so I hit the road and instantly noticed that the engine was smoother and was pulling better. Whoohoo. There are a number of quite steep climbs going up Mount Ousley and she handled them beautifully. It’s always nice when you are doing 100 at the bottom of the hill and still doing 100 at the top.

There were some bikes there in the car park and Goldie received some admiring looks from not only riders but several car occupants as well. 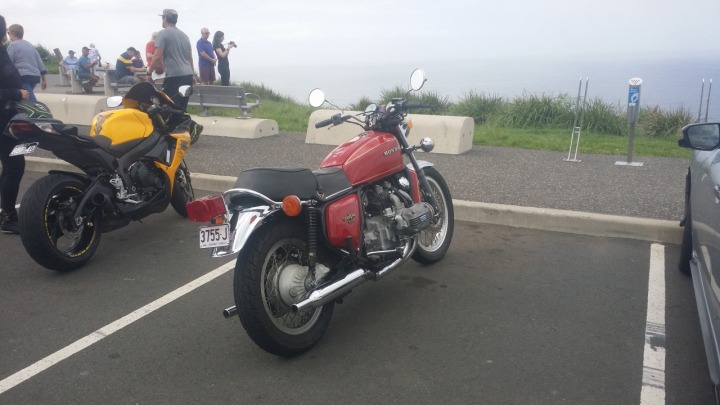 There were also some very nice period bikes there as well including a delicious Honda CBX, fully restored, yummo. 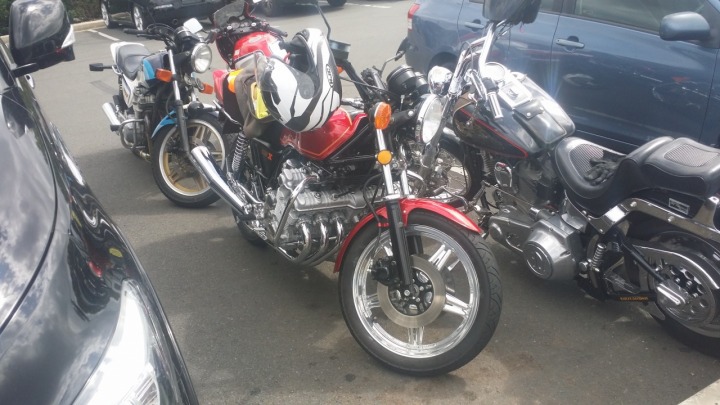 I wended my way home, increasingly happy with the bike in its refreshed guise. About 120 kms for the loop and not a glitch. My log book is going to be taking a beating from now on, I feel.