I’ve been spending a fair amount of time at my optometrist’s lately.There are a couple of reasons for this. Firstly, it is time for my yearly check-up, something I ensure that I have every year and secondly because I am contemplating some surgery. For many years now I have been aware that I have a case of ptosis. Ptosis (the “P” is silent like the “X” in caterpillar) is a complaint where the muscles of the upper eyelid lose tone and cause the eyelid to droop. If left unattended it can lead to very badly restricted vision. Now mine seems to have plateaued and hasn’t gotten any worse for years but it still bugs me and manifests itself in two areas both of which I find annoying. Firstly, ptosis affects peripheral vision in the upward direction (obviously).  In my case this has led to innumerable bangs on my head on solid objects that I haven’t see because I can’t see clearly upwards. My already bald pate is a criss-cross of scars of varying magnitude from having bumped my head over and over again. I”ll get to the second reason in a moment.

Some years ago I consulted my optometrist (a wonderful lady, charming to a fault and with a great sense of humour) and we commenced the process of looking into (did you see what I did there?) the possibility of having surgery to correct the fault. It is relatively straightforward and leads to all sorts of improvements in general eyesight and eye health. Unfortunately she recommended me to a specialist in town who is widely regarded as the most outstanding in the city. Sounds good, eh? Well, it wasn’t. Great surgeon he may be but to me he had the most abrasive personality of just about anyone I have ever met. To say that we didn’t see eye-to-eye (see, I did it again?) is putting it mildly. The process stalled right there and has never proceeded any further.

So, the other day I asked Malinda if there was ANOTHER surgeon she could recommend and, hooray, she recommended not only one who is also a top man in his field but is also known to me as the was the doctor who treated my mother’s various eye conditions for years before she passed away a couple of years ago. So I’ve been to see him, had the necessary tests and am now on the waiting list at my local hospital to have the surgery done. It may take a while as I am a public patient but I’m a very patient patient so I’ll wait.

So, what was that second reason I’ve been to the optometrist recently? Well, since I have had a heart attack and since I suffer form a mile form of diabetes, my local licensing authority requires that I undergo a “Fitness to Drive” assessment. That guy in the back row who is guffawing uncontrollably can wait behind afterwards and clean the erasers. This requires a visit to my doctor who fills in the appropriate medical section and to my optometrist who fills in the appropriate eye sections. Of course you wouldn’t want to know it that the form arrived in the mail a week after I’d been to see the optometrist, would you? Fortunately, she’d done all the tests necessary the week before so signing off on the form was merely a formality.

Now, it’s pretty easy to see what connection there is here with motorcycling but it actually goes a little deeper than that. Let me explain.

If you have been a member on a motorcycle forum or if you are a member of a motorcycle group or two on social media you will know what’s meant when I say that something is a “popcorn question.” We’ve seen them a million times and we continue to do so. Some newby comes on and says, “What’s the best oil to use in my VFR750?” Or, “What tyres do you guys reckon are best for my V-Strom?” If you feel like a giggle, you will reply “Black, slippery stuff and round black ones.” Someone will then snap back that you’re being unkind and so it goes on.

But the most frequently asked popcorn question is this one. “I’m looking to buy a new helmet. My buddy reckons that Shoei is the best, what do you guys think?” Of course the problem with the question is that it assumes that there IS a “best” helmet and we all know that there ISN’T. Eventually, when all the hilarity dies down, some kind person will tell the questioner that. And it is so because for every person that buys a new helmet, the majority of them will reckon that there’s is the best. But it can’t be because we all have different shaped heads and so we have different helmet requirements. As best as I can remember, it goes something like this (or, at least, it used to). If you have a narrow head that is longer than it’s wider, Shoei fits that shape of head the best. If your head is pretty much round, the ARAI’s shape is the best for you and, if your head is wider than it is long, then AGV is better. Of course there are a million permutations and combinations to that but at least it’s a starting point.

That’s why your buddy might think his Bell is the best but you think it feels like jamming your head into a bucket. It’s nothing to do with the HELMET, it’s to do with the shape of your head. Now the helmet makers are getting cleverer all the time in order to solve this dilemma, after all they want EVERYONE to buy their lid, don’t they? Most manufacturers now offer varying padding options WITHIN the helmet that can make you feel comfortable regardless of the shape of your bonce. But don’t be talked into a helmet just because someone said it’s the best.

So, what helmet SHOULD you buy? My answer is always a two-fold one. 1. Buy the most expensive helmet that you can afford. Yes, a cheaper helmet MAY be as good but the chances are that the more money you spend the better quality lid you will get. Remember when Bell first introduced the Bell Star helmet back in the early 1970s? What was the catch-phrase? “If you’ve got a $10 head then buy a $10 helmet.” It still applies. And #2, buy the most comfortable helmet you can afford. This means shopping around and means going TO the shops, trying on as many as you can and  not trusting what someone on the ebay shop tells you.

Now, having dealt with that, let me get back to my personal take on this based on years of riding and connected intimately with what I have discussed about above in terms of vision. We are told, are we not, that the key to good cornering is to look THROUGH the corner not AT the corner. Great advice because it’s right. BUT, my particular situation has been that it it not always possible to do this because of the design of the helmet. Helmet designers and manufacturers are always on the horns of the safety dilemma, after all, that’s what helmets are all about, yeah? On the one hand the desire is to make the aperture as small as possible thus making the helmet more rigid, safer and lessening the possibility of intrusion of foreign objects into our faces. BUT, in doing so, they, by default, reduce the rider’s all-round visibility. Catch 22.

Now regardless of what the manufacturers will tell you about the whizz-bang features of their latest model, there has only really been one major advance in helmet design from a design point of view and that has been the internal sun visor. All the rest of the “features” are really frills to try and encourage you to buy. I mean I’ve had helmets with all sorts of built-in vents over the years, for example but do they work? Of course they don’t. They LOOK trick and they promise lots but, in the heat of an Australian summer, they just don’t deliver. But the internal visor is definitely a winner. So, in the end result, after you have satisfied the two requirements of safety and comfort, the next most important one is all-round visibility and this MUST be on your shopping list.

The most comfortable helmet that I have ever owned (except for my current one and I’ll get back to that in a moment) was my Nolan N104. It was a modular lid and it was the quietest flip-front on the market. I loved it but it had a major fault that I didn’t find until I had bought it and started touring with it on. The UPWARDS vision was appalling. The aperture appeared to be large but it was very restricted when you were trying to look through the corner and doubly so when you were either riding uphill or downhill, for obvious reasons. 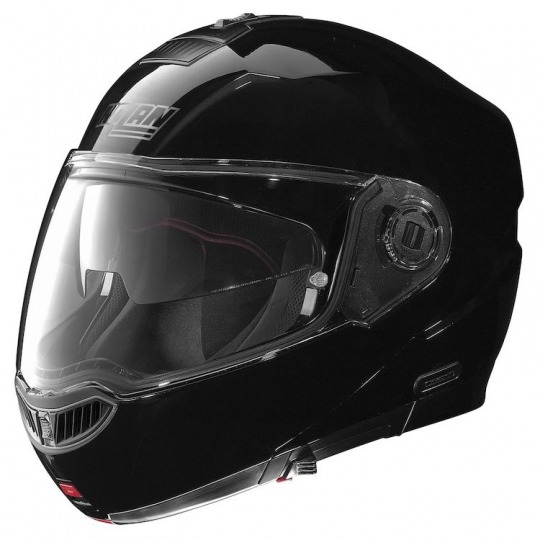 Mine was gloss black and it looked wonderful against the gloss black of my VFR750. But would I buy smother? No, for the reasons I have detailed above.

My CURRENT helmet is a Shark Vision R. It’s not a modular which is a pain because it means taking my glasses on and off all the time, but it has fabulous all-round visibility and is comfortable and quiet. It has a couple of other trick little features that Shark have now dropped from the model that succeeded it (for reasons that seem totally unknown to me).

Riding is about all sorts of factors, but, in the end, they eyes do have it.