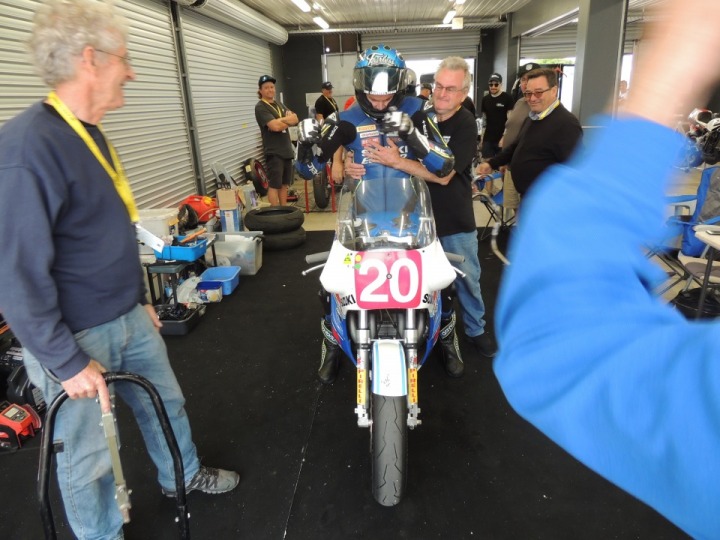 It may seem a little tardy of me to leave it almost a week before updating my blog with a report from the IC, but I have had my reasons. Let me summarise then I’ll go into a bit more detail.

Australia won the International Challenge by 13 points over a strong American team. The win was built firmly on the back of the rider pictured on the screen. Alex Phillis, son of Mr Superbike, Robbie Phillis, who dominated the big races with a 2,1,1,3 result in the four races. Alex was the only rider to win more than one race with the exception of Team USA’s #1 rider, Josh Hayes, who won the two that Alex didn’t. However, Hayes suffered from poor finishes (by his lofty standards) of a 5th in Race 2 and a 4th in Race 3. Hayes went 1,5,4,1. Team Australia won on the back of Phillis’s excellent placings and solid performances by the rest of the team, stacking up the points in every race.

As always, the Classic has a million stories and I can only tell a few of them, so here we go.

One of the things I love about the Classic is meeting people who I only ever get to see once a year. People like Richard Peers-Jones and his lovely wife, Mandy. We’ve been fiends for years now and I follow Richard’s progress as he competes in the European Classic series on his TZ350 so I always head pretty much straight to the Team UK pit for a catch-up. And people like Clive Warner with his brace of very special 3 cylinder Yamaha two stroke racers. An added attraction is Clive’s commercial espresso machine which always gets unloaded and set up even before the bikes get unloaded. Seriously. And, if you’re on Clive’s short list (I am) you can drop by and he’ll make you an espresso. What a wonderful way to start each race day. 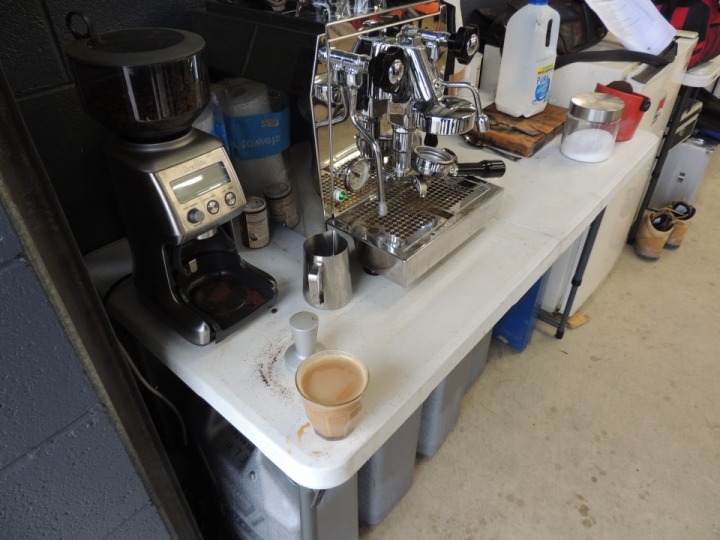 Then there’s Cynthia Lopez-Graham. Who, you may ask? Well, the surname might be a clue. Yes, Cynthia is the daughter of Eddie Lopez whose Ducati 900SS was a feature of so many Castrol Six Hour races. The bike was called “La Peca” and it was written on the fairing. What does it mean? Well, La Peca means “the freckle” and it was named so because Cynthia had lots of freckles on her face when she was a little girls and Eddie named the bike after her. Neat, huh? Cynthia always stops me in the pits and we natter about life and bikes. Each year she brings her little daughter and each year she amazes me with how much she’s grown since I saw her last Island Classic. There are no freckles but, somehow, I think of her as La Peca still.

I only get to see my old CRRC racing buddies once a year and that’s at PI. Neil Stuart and Murray Ogilvie always pit together and now their sons are racing and wrenching as well. My how time flies. On a side note, Murray owns and manages High Country Outfitters in Jindabyne, in the Snowy Mountains. His business is struggling to survive in the aftermath of the disastrous bush fires and tourist downturn. If you’re passing through the Snowies please stop and buy something at HCO, they really need your support.

Of course, the Team Phillis garage is always bouncing, win, lose or draw. I’ve known most of the guys there for more years than I care to relate. Super mechanic, Lyell Williamson on the left of the picture above, star rider, Alex, yet to get off the bike, Mr Superbike himself, Robbie Phillis and “Spud” Roger Arnold, boss of Arnold’s Fruit Barn in Wodonga and the team’s sponsor. They’re a tight knit bunch; the do all their stuff in-house, not farming the fettling out, and Alex goes out onto the track ever session knowing that the bike has been prepared not just meticulously, but with love as well. Robbie’s the toughest of the tough, but he shed a few tears on the weekend I can tell you.

Of course I love spending time with the Americans. Though a passionate supporter of Team Australia, the Yanks have had a special place in my heart since first I met some of them at my first IC in 2013. Each year they improve and each year they take the disappointments on the chin, bring a shipping container of bikes half way round the world to share the IC experience. Team Boss, Dave Crussell is a gem and his lovely wife, Lorraine, brought another “tiddler” bike this year which ran flawlessly (hooray) and netted her a 2nd overall in her class. Just reward. I love hanging out with Bruce Lind as already noted and though the bike broke a rear brake master cylinder that out him out of the 4th race, the 750 ran brilliantly all weekend finishing all its races, again a just reward for Bruce’s perseverance with what is, literally, a 45 year old bike. The team-within-a-team, Team Texas, had an outstanding weekend with Jorge benefitting from all of his experience last year. The bike ran great till the last race when it snapped a camshaft and undoubtedly scrambled the engine but fun was had. Whether bike owner, Paulie Schaeffer, will be able to afford to bring it back in 2021 is a question but, if I had my guess, it will be back.

Team America brought out Melissa Paris to race one of Dave’s TZ750’s and she was quick and smooth, befitting her reputation gained in the hard school of AMA Superbike racing. It was a great family affair for her to be racing alongside her husband, Josh Hayes and also to have their little boy, Hawk with them. Unfortunately the TZ seized through no fault of Melissa’s and she was sidelined for the weekend. She will be back, for sure. 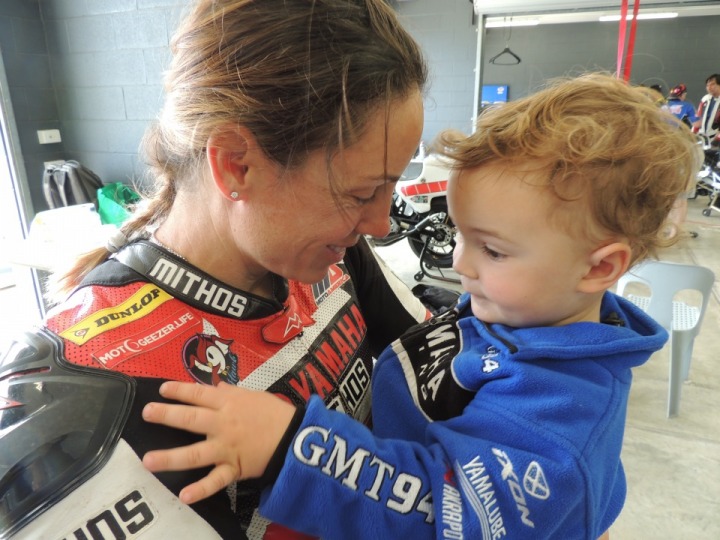 As happened last year, Josh Hayes won Race 4 and finished off the meeting in grand style for Team USA. I was tickled for them. 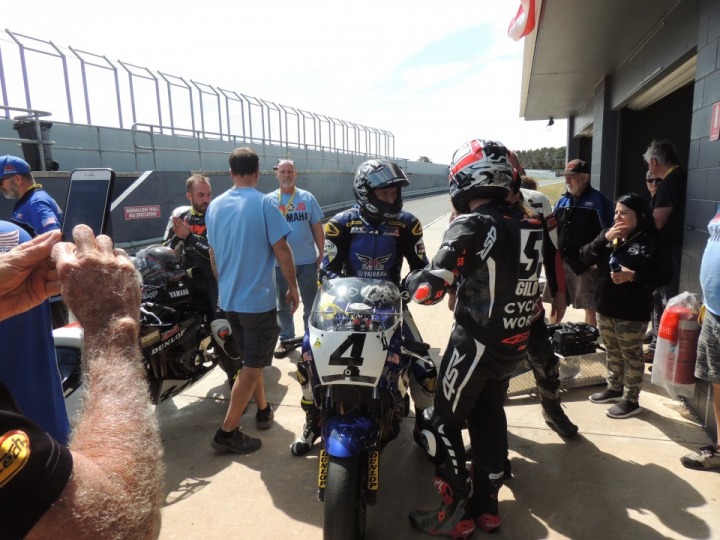 Cycle World columnist, Michael Gilbert was again the 2nd top scorer for the Yanks, the kid is super fast, super smooth and super reliable. I love the way he goes about his work.

So, after completing my journalistic duties, I put my media gear in the Official MotoPod Media Centre and headed north. I stopped for a snooze about 40kms north of Albury and slept easily for two hours. I then pushed on but the eyes were getting sore (I wasn’t tired, just blurry) so pulled over again north of Yass and got another hour of zzz’s and arrived home, tired but happy, at 0930 on Monday morning.

I want to thank Les and Glenn Corish for their insistence that I come to the IC as part of the team and their help in making sure that it happened. I really can’t thank them enough. Unfortunately, the VP Fuels Katana was stroppy for most of the weekend and the team did not get the results that they deserved considering all the hard work they put in to get there, there’s always (hopefully) 2021.

I’ll probably think of some more stuff so I hope you won’t mind if I post it up as I remember. Thanks for reading and thanks for all the compliments that you gave me on the weekend. It’s a real buzz when someone you don’t know comes up to you in the pits and says, “You’re Phil Hall, aren’t you? I love reading your blog.” 🙂