You are here: Home / January 2020 / Thursday notes from the Island 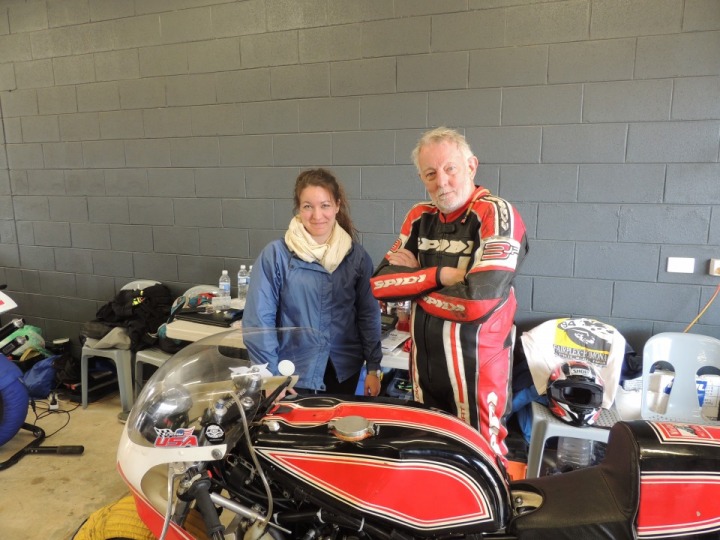 Today was practice day though nowhere near enough practising got done due to rain which swept regularly across the circuit throughout the day. However, it is what it is, as someone said (I think it was me) and it was the same for everyone so you make the best of it.

So, a few reflections on the day. Firstly, the big picture:

The Island Classic is in serious trouble in terms of its long term future if this weekend is any indication. Entries are WAY down as riders vote with their feet over ever-increasing costs and red tape. The “domestic” pit at the far south of the circuit is almost deserted and there are NO pit tents along the back of the main grandstand as there has been in previous years. These tents were normally full to capacity so you don’t have to be a genius to figure out that something is wrong. Riders who wish to enter in the event have had to register through a 3rd party agency (riders.net) and this process, as well as being completely unnecessary, probably means that someone else is taking a share of the riders’ money. Once registered, however, the rider then has to negotiate with PI Operations over pit garage allocations. It seems ridiculously complicated to this layman, that’s for sure.

As noted yesterday, the International Challenge is losing its sparkle as well with no NZ team, no Irish team and a Team GB which is a pale shadow of previous years. It’s going to be a straight shoot-out between the Aussies and the Yanks and I have to say that the Yanks are looking VERY threatening indeed. It would probably be unfair to say that the event has “jumped the shark” but it’s looking perilous.

So, to the smaller details of stuff that I have gleaned from trolling the pits today. In no particular order, here’s a capsule coverage of Thursday. It was a pretty uneventful day, especially with the weather not being conducive and there were lots of smiles up and down pit row at the end of the day.

Australia’s #1 rider, Jed Metcher is looking very impressive. With the choice of two T-Rex bikes, one with a Honda engine and the Yamaha-engined bike used to such good effect by Troy Corser two years ago, Jed is sitting pretty. At the moment his choice is for the Yamaha but I think that’s to be expected.

My good CRRC buddy, Murray Ogilvie, had a small get-off in the rain in the first session but the bike was repaired and he was back out for the next one, albeit with an abbreviated screen. “Adding lightness” I believe it is called. 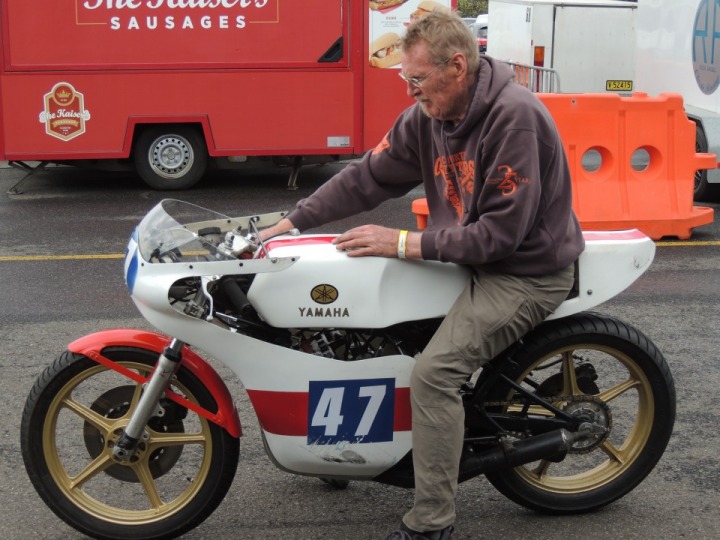 Team Dynowerks debuted its new RC Honda 750 today. A similar bike to the one used to such good effect by Dean Oughtred, this bike has a host of improvements, most notable being the use of a Honda Gold Wing front end with reversed calipers. A few electrical teething problems showed up late in the day but, overall, the team is pleased. It looks magnificent and sound terrific. 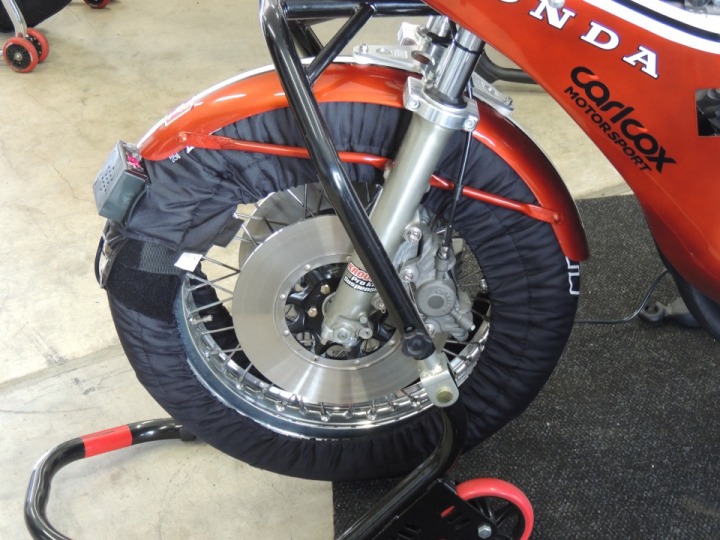 The Team Andrea TZ750 ridden again this year my “Mad Eyes” Marty Cragill has also received some TLC in the last 12 months and it was quick right out of the box today. It’s what Yamaha WOULD have done if they had persevered with the design, new frame, Consortium engine and all. Fabulous. 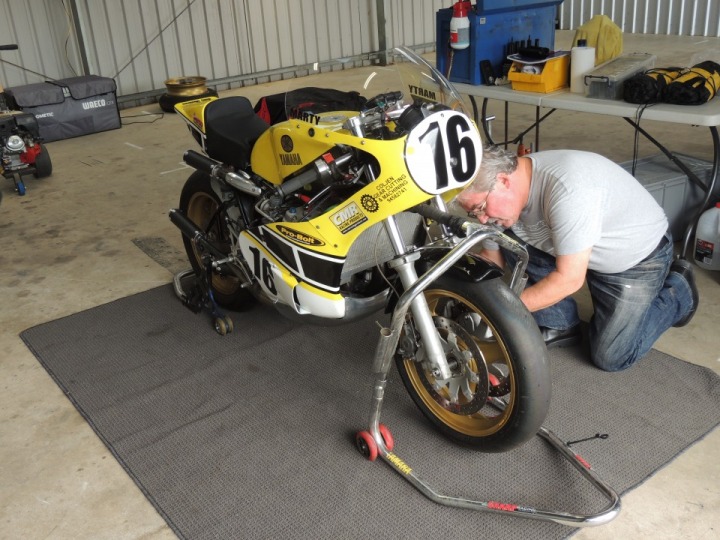 Another good friend of mine, Warren Mcwhirter (nicknamed “Squeak”) from Wauchope in NSW, is here again with his drool-worthy Bimota DB1. I wish I could let you hear how it sounds but I can’t 🙂 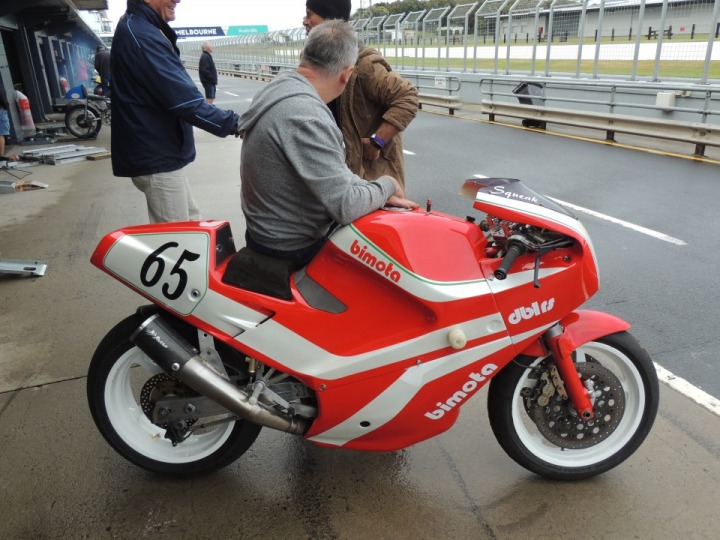 The Team Texas team within Team USA endured a frustrating day with the Stealth Suzuki but there were signs that it was responding to treatment late in the day with rider, Jorge Guerrero Jr declaring himself to be much happier at the end of the last International session. I hope it goes well, Paulie Schaeffer has put so much into building it and bringing it, he deserves some reward.

One of my favourites, Clive Warner from Melbourne had a tumble on one of the Yamaha “triples” Lots of damage but repairable and Clive is OK. Rear tyre was WAY over pressure, so they know what went wrong which is always a bonus.

I had a great chat with Mal Pitman today. Those of you with long memories will remember his chain drive XS1100 that won the Coca Cola 800 in 1981. Mal is building some pretty trick RD250Lc’s with some updated bits and some modern technology and the really are lovely things. 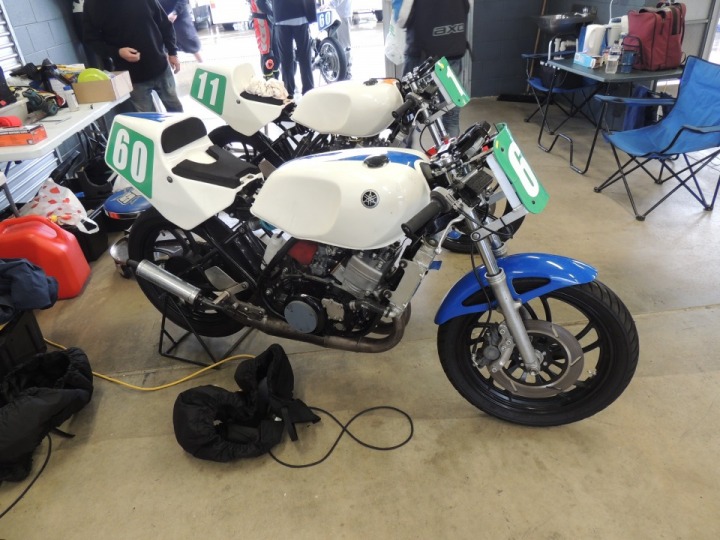 Washington State’s Bruce Lind is back with his atmospheric 1975 TZ750 (see above). He’s owned the bike since new and has raced it at the last two IC meetings with limited success. Celebrating his 56th year of racing, Bruce treated the old girl to a complete strip down since last meeting in an effort to diagnose and fix a gear shifting issue and also a plug fouling issue. The gear shifting problem was resolved by replacing two of the shifter shafts that were worn beyond acceptable limits but the fouling problem was a little more tricky.

The solution was finally found when Bruce took the engine to an engineer friend who wasn’t a motorcycle mechanic. He looked at the engine from the point of view of what the METAL should be doing and he found the solution. It appears that, between the crankcase and the gearbox is a metal “wall”. Over time this wall gradually recedes which then allows the oil from the gearbox to be dragged into the combustion chambers. This tiny gap was what was causing the fouling of a plug.

The solution was equally tricky, though somewhat brutal. He actually used a metal dolly against the wall and hammered it until it was back to the height it was supposed to be. A straight edge along its top and a torch shone from the other side showed that the gap had disappeared completely. Now if this sounds way too agricultural to be true, then that’s what I thought too but you know what? It worked. Today the bike ran flawlessly in every session. Hooray.

Bruce’s lovely wife didn’t come down under this year, her asthma is proving troublesome, but Bruce brought his niece, Jennie instead and what a delight she is.

Finally, my Zuma iBike is proving to be a great purchase. So easy to get around the pits without having to walk the long distances. Highly recommended. 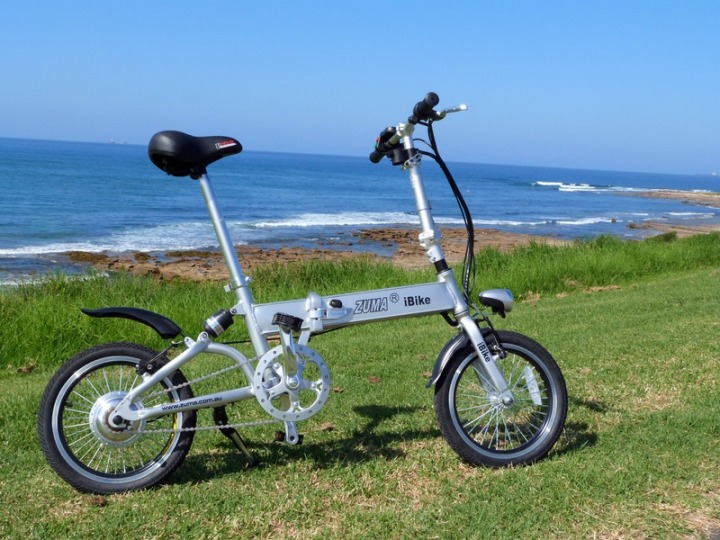 That’s all for today. Tomorrow is the serious business of Qualifying. Should be fun. But, just before I go..

A good friend of mine has been tossing around some ideas of where the Island Classic should be heading and, among the suggestions is that we need to have sidecars back on the programme. I agree, so, what about a proper International Challenge for sidecars just like the one for the solos? So that they’re not just an add-on to the programme but an integral part of it with equal billing. What do you reckon? I think the idea has merit.

I have edited the text. Bruce Lind is celebrating his 56th year of racing and Jennie is his niece, not his daughter. And, since she is the daughter of Bruce’s brother, she is actually Jennie Lind, how cool is that?