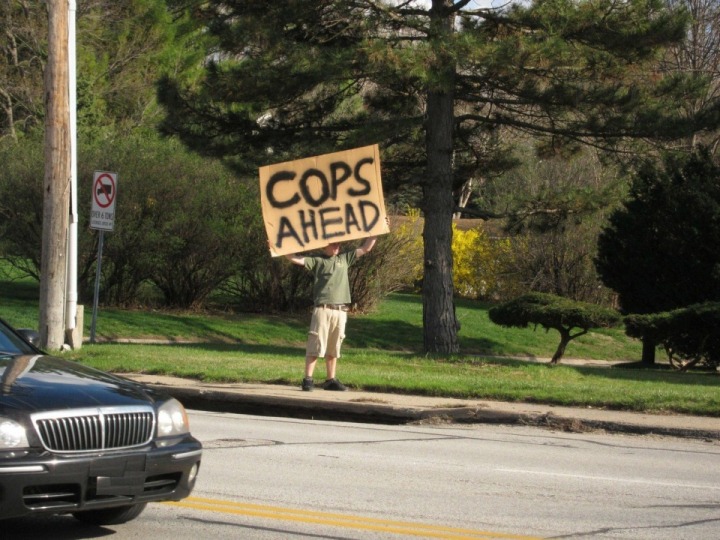 The following is an article I published elsewhere a few years ago but which is pretty relevant right now.

Over the Christmas/New Year break we are accustomed to the usual PSAs from the authorities about travelling safely on the roads; don’t speed, don’t drink, take regular breaks, wear your seat belts, etc. And these are usually accompanied by graphic videos of crash sites and carefully staged media opportunities featuring large numbers of police vehicles carefully staged to look both impressive and menacing at the same time. The message is always the same, “Don’t break the law, because, if you do, we WILL get you.” This is backed up by the infamous Double Demerits campaign that threatens to do serious damage to your licence should you even THINK about breaking the law.

Of course, the majority of motorists don’t need to be reminded which is why the majority of them get their holidays done and dusted without even having to think about the issue. But the lawmakers appear to be determined that every last lawbreaker will be detected and punished.

Of course, the fact is that, the majority of people who DO break the law go undetected for the simple reason that police resources are so thin compared to the number of people using the roads that the odds are heavily in favour of the motorist not the police. This is why we are accustomed to the usual lurid headlines in our news services when somebody doing something utterly bone-headed IS detected and caught. Like the fool doing 200km/h in his Commodore on the Illawarra Highway the other day. These announcements are always couched in “shock-horror” terms and accompanied by the implied warning that, “We got him and we will get you too.” As noted above, the reality is that you WILL probably get away with doing stupid things as long as you choose to do so away from the normal areas haunted by the Highway Patrol on their revenue-raising mission.

PLEASE NOTE: I am not suggesting, advising or advocating that you do so, for ANY reason. Anybody who does so is stupid and deserves to be caught and prosecuted to the full extent of the law. Like the dumbbell who is crying foul in South Australia at the moment because he has been prosecuted for taking a “selfie” in front of a fixed speed camera in the Adelaide Hills. I mean, really, what did he expect? The sense of outrage would be understandable if the situation wasn’t so laughable.

As a motorcyclist, this situation taps into the ingrained sense of persecution that has been part of the motorcycling ethos since Marlon Branflakes and the “Wild One” in the 1950’s. Despite the fact that motorcycling in general was never like what is depicted in the movie, the general public, and our legislators, still have that sneaking suspicion that, behind the warm and fuzzy veneer of the modern motorcyclist is a raging delinquent who will rampage through your town with his gang, destroying your property, corrupting your children, drinking your beer and terrorising the populace. (Viking motto: Always remember to pillage BEFORE you burn.)

And it is just this suspicion that seems to be behind the current horror stories doing the rounds on social media. It seems that somewhere in Victoria (surprise, surprise) a motorcyclist has been issued a fine for wearing a tinted visor on his helmet. Now the exact circumstances of the situation are still unclear and pounds will get you pennies there are factors that led to the issuing of the fine that have nothing to do with the visor, but, these have not been made clear. That aside, it does seem odd that this issue has been singled out for attention. It seems that some visors do not meet Australian standards despite being sold attached to helmets that DO. Eh? Yes, it appears that, once again, the law is an ass. Much, much more will be written and said about this situation before we have clarity on it.

Some are suggesting, hinting that the rider brought the attention upon himself by either his riding or his attitude when pulled over.

Some are saying that the use of tinted visors IS illegal, though nobody at this stage has been able to point to chapter and verse. All that has been admitted at this stage is that wearing them at night certainly is (though how do you determine “night” – a “grey area” perhaps?) The fact is that, there are so many ridiculous laws on the books that, if a cop wants to, he can always find some area where you are in breach of some regulation or other .

There is the suggestion that this was an exploratory raid. The police trying out some new tactic to harass motorcyclists which, if successful, could lead to wider uses of the laws in this area. Knowing what Victorian police are like, the suggestion has more than a smidgen of credibility. After all, it was Victoria who introduced the infamous “3 km/h over the limit” speeding campaign some years ago. It is now firmly entrenched in practice, if not in law, so, when you drive or ride in Victoria, watch your speedo like a hawk, especially if you happen to be going downhill at the time.

There is a suggestion that Victoria is moving in the general direction of Queensland whose anti-outlaw gang laws have inevitably been used against non-outlaw motorcyclists as well. This should not surprise although there appears to be no evidence at this stage that the said laws have had any effect on the nefarious activities of the 1%-ers who we all know and love

The bottom line here is that the reaction from our side of the divide has been predictable and powerless. Predictable because we all carry the persecution complex that comes with the territory of riding a motorcycle. To a smaller or greater extent we know that, when we sign on for the gig, we will be joining the ranks of the “outsiders” as far as the mainstream of society is concerned. Most barely know the mantle is there and ride on, regardless. Some wear it a little more openly and are always on the lookout for ways that they can complain of their lot and others, notably an odious and loud-mouthed “journalist” (name withheld to protect the guilty) wear the badge with pride, shrieking from the rooftops his “outrage” and hatred of the system and how it persecutes his chosen area of transport.

But not only are we predictable but we are also powerless. Even though a pro-motoring party actually won a seat at the last federal election, the chances of motorcycling catching a break in the legislative process is slim to none. Motorcycling just isn’t important enough in the overall scheme of things. Organisations like the Motorcycle Council stand a far better chance of achieving long-term gains for us than political agitation. Of course, the MCC has already achieved a great deal in helping our legislators understand our position and factoring in motorcycles when framing laws and regulations (the recent adoption of “filtering” laws is a classic example.)

Unfortunately, the poor Victorian rider and his tinted visor looks likely to become collateral damage in a much larger war that is being waged. The war is based on a continued (indeed, increasing) stream of revenue from motorists by the introduction of increasingly draconian laws with increasingly stringent penalties.

While other, mainly European, countries are embracing motorcycling for all the benefits it brings, our legislators, with their heads still firmly in the 19th century, press on, hoping that, by the introduction of increasingly harsh laws, they might even be able to stamp out motorcycling altogether.

Me? I just ride. I have been booked on my motorcycle just once in over 40 years, in Toowoomba in 1985. I fly below the radar and I enjoy my riding. I don’t draw attention to myself by what I do or what I say and I don’t give the man any reason to look twice at me. Perhaps THAT is the answer.