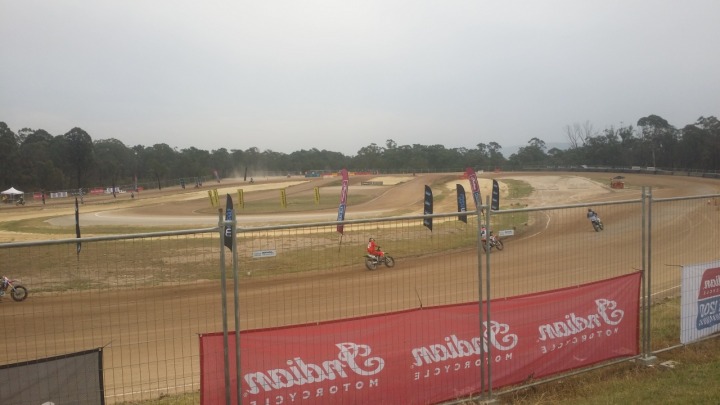 I spent a very enjoyable day on Saturday commentating at Macarthur Motorcycle Complex near Appin, about 50kms from my place. The occasion was Round 2 of the cleverly-named “Sultans of Slide” NSW Flat Track Cup short circuit series. The Series is a new initiative of Motorcycling NSW designed to rekindle the interest in and participation in short circuit racing. Short circuit has been around for donkey’s ages and was an offshoot of speedway to begin with. Tracks were usually oiled dirt tracks and if you had any sort of dirt bike you could ride them, which you couldn’t do with the classic speedway slider. Sliders were used, of course, but you could bang a set of trials universal tyres on your MX bike, drop the forks through the triple clamps and go racing. Tracks usually only had left-hand corners and direction of travel was anti-clockwise. I say usually because I distinctly remember that the track in Canberra, Fairbairn Park DID have a right hand kink incorporated into the back “straight”. Watching the sidecar competitors wrestle with that was always entertaining.

However, with the popularity of Supercross and all the other dirt track disciplines, short circuit has been in the doldrums a bit. Oiled tracks are dirty, bikes get dirty, riders get dirty, spectators get dirty and the whole discipline acquired a bit of a “grubby” image. This is not to say that it doesn’t produce great racing, it does. And it’s not to say that it isn’t a fertile breeding ground for youngsters looking to hone their craft. With the admission of the Junior classes, it has provided an excellent opportunity for younger riders to learn how to slide a bike and also to learn the importance of bike preparation. Heck, many of the young kids doing so well in MotoStars at the moment started racing on dirt track and some of them still DO, mixing the disciplines  very successfully.

But there has been the school of thought for a while that the sport needs a freshen-up and the Sultans of Slide concept sort of drags short circuit racing, kicking and screaming (in some cases literally) into the 21st century. The differences are pretty major. Firstly, the tracks are not oiled at all, they are straight dirt. 17″ trials universal tyres are out in favour of a 19″ control tyre formula using a dedicated dirt track pattern and compound taken straight from American dirt track and flat-track racing. This requires some modification of bikes and suspension settings, of course, and it means that, for now at least, the bikes are slower in lap times because the tyres do not provide the same level of grip as the TU tyres do. Manufacturer of tyres is not controlled as long as the tyres comply to the size and tread pattern specifications. The 19″ tyres are not as predictable near the limit and the riders are still learning how much they can trust them.

All ages are catered from with kids as young as 10 being allowed to race in their own categories. Two stroke and four stroke bikes have their own classes (sometimes mixed to provide a degree of parity) and the races are held over short race format, 4 to 6 laps of a c.500m track.

Now the track at Macarthur is pretty brand new, especially built for this type of racing. It is billiard table smooth and quite the widest dirt track of any that I have ever seen. Doing the track walk on Saturday morning emphasised just how the track is set up to allow for multiple lines and approaches to how the riders were going to get around the corners. Racing later proved that this perception was spot-on. The other major difference between the classic short circuit track and this flat track layout was that the Macarthur track has a significant amount of elevation change, providing another challenge to the riders.

Last weekend was Round 1 at Wagga and it was a very successful event by all reports. The final round is NEXT weekend at Kempsey so the whole experiment is compacted into three weekends.

So, how did it go? Well, I thought it was terrific. I didn’t recognise any of the names though I was to find out pretty soon that, just because I didn’t know them, didn’t mean they weren’t famous in their own area of expertise. Max Whale and Michael Kirkness are both very experienced riders having ridden for a number of years in flat track racing in the USA. Several other riders are also seasoned veterans of AMA flat track. Unsurprisingly, the experienced riders cleaned up with most entrants only having their second run ever in the new format. The Juniors, being Juniors, took to it like a duck to water with the two Drane boys being prominent.

Oh, and did I mention that the meeting incorporated a “Multi” class? Yep, a special class for bikes with more than one cylinder and what a fascinating class it was. WSBK regular, Tommy Edwards was there on an Indian FTR1200, pretty close to stock by the looks of it. Indian are the major sponsor of the 3 race series and the Indian “boffins” there seemed pretty chuffed with the exposure their bike was getting. Edwards was a close 2nd all day to Max Whale who dominated the Multi class on an Aprilia 650 twin. But that was just the tip of the iceberg.  Also running in the Multi class was Daneil Yarnold on a Harley flat track bike imported from the States and there were half a dozen more Harley flat track bikes there as well. There were a couple of Triumph Thunderbird twins and even an old-skool Kawasaki 750/4 set up for flat track racing, what a hoot the Multi class was.

There were 21 races in the morning across the 7 classes with each class getting three rides (obviously) Then there was a lunch break. After lunch there was another 21 races (more on that in a moment) on the TT course. TT course, I hear you say? Yep. At the top of the hill in my picture above, the riders turned hard left, over a jump, back down the hill into a tight RIGHT hand turn (it was so much fun watching them trying to figure out how to turn right)  then back up the hill, over another jump and a hard left before heading back down the straight to the S/F line. What a blast it was to see an entirely unfamiliar scenario where almost everyone was coming at it dead cold. Those of my readers who are well versed in the history of motorcycle racing, especially Stateside, will remember that the TT was just one of the disciplines that riders HAD to ride if they wanted to win the coveted AMA #1 plate back in the day.

Now there were supposed to be 21 races for the TT part of the programme, but the organisers ran out of time and the weather was rapidly closing in so it ended up being about 17 races instead. No matter, it was still worth the price of admission anyway.

Did I enjoy it? Hell, yes. Would I go again? Same answer. The concept is great, the meeting was extremely well organised and ran like clockwork and the riders had a ball, what’s not to like? Get along to Kempsey if you can next weekend (unfortunately I can’t as I have commentary commitments at my local speedway) and watch out for the series in 2020. It’s a great initiative and it deserves to succeed, well done to the organisers.