The worst-kept secret in MotoGp was finally revealed on Thursday night when Jorge Lorenzo announced that this weekend’s MotoGp race at Valencia would be his last. Given his abject performances this year and his almost career-ending back injury mid-season, nobody was in the least bit surprised.

Now I have to say, right from the start, that I have never been a Lorenzo fan. Some of his dangerous riding while in 250’s earned him some bans (and justly so) and his hokey post-race celebrations once he got into MotoGp were cringe-worthy in the extreme, however, it wasn’t that that really turned me off him, it was just that he was so one-dimensional that, when his whole life does flash before his eyes one day, I swear he won’t be in it.

Of course, now that he has announced his retirement, everyone is falling over themselves to say what a wonderful rider and person he was, even those who had previously not been fans, how hypocritical we can be? On paper, his record looks impressive and it is.

Here, courtesy of MotoGp’s stats page, is his career encapsulated. 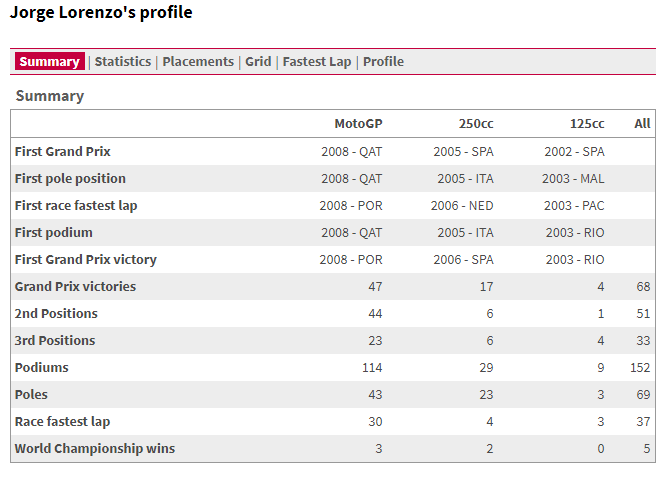 Whichever way you look at it, it’s good. 5 titles (2×250, 3xMotoGp) and 68 wins are the stats that matter, that puts him up near the top of the lists. Commentators are making much of the fact that Lorenzo beat Stoner, Rossi and Marquez during his career and that is also true.

What the stats and the commentators don’t say is that Lorenzo benefitted greatly in his career by the dominance of Yamaha as a grand prix bike during that period. It’s never easy to win a MotoGp race but it is easi-ER if you have the best bike and many of Lorenzo’s victories were when he was riding the best bike. It is also true that the stats do not show the manner in which a race is won but our memories will always refer back to the huge proportion of Lorenzo’s wins where he started on pole or on the front row at least, buggered off into the distance and had only himself to beat because of it.  Like I said, it’s never easy, but it’s a damn sight easier if you don’t have to battle for the win.

Tellingly, we found out how much Lorenzo’s career benefitted from the dominance of of Yamaha when he was pushed out of Yamaha and joined Ducati. Yes, he eventually won three races for the Bologna marque but only after  a terrible period of excuses and poor performances.

His move to Honda was, in my opinion, the worst thing he could have done. His riding style would never suit the “grab it by the scruff of the neck and wrestle it into submission” approach required to win on the RCV. Coming into the season injured and then suffering a series of injuries early in the season didn’t help but the Honda move was doomed from the outset.

I hope he survives this weekend and doesn’t hurt himself again, he at least deserves that. As I said, I was never a fan, his dour, humourless persona just never grabbed me and, while I admire his career, I really won’t miss him.

HOWEVER, the media and the pundits are abuzz with who will replace him at Honda for 2020. Jorge was on a two-year deal due to finish at the end of NEXT year as are all the current crop. Honda has to find someone who is prepared to sign a ONE year deal to ride the most difficult bike in the paddock and try and be the wingman for Marc Marquez. Yeah, good luck with THAT!

Answers to the dilemma include. Cal Crutchlow who has been banging on for years about wanting a “works” bike. Unfortunately, the lifeline has probably arrived too late for the Brit. He has enormous loyalty to LCR and is already speaking about his imminent retirement himself. Whoever Honda choose, their previous form suggests that they don’t hire riders who are in the twilight of their careers. This caveat also probably rules out Johann Zarco. His performances as the stand in for Nakagami have been very impressive (10th in qualifying last night at Valencia) but he, too is looking at a career which has less distance to run than it already has.

Nakagami? No. Despite Honda always trying to have a Japanese rider to fly the flag for the home team, Nakkers isn’t the answer. His career has probably peaked as well.

Well, where does that leave them? Well, the obvious answer and the one that everyone is touting is Marquez Jr. Despite all the reasons why it might be a good idea, I don’t think it will happen in 2020. Alex has already clearly said that he wants to stay in Moto2 next year and defend his title then look at 2021 when there will be LOTS of seats available from which to choose. Alex IS the Moto2 champion but he has made heavy weather of winning the championship on a bike that, till the late, last season burst by the departing KTM’s has been the dominant machine. When he first arrived in grand prix racing, Marc was saying that everyone had better look out because Alex was better than he was. He hasn’t quite lived up to that hype and I have the sneaky suspicion that he won’t in the future. I’m not sure that HRC will want a two-brothers team anyway and I’m equally sure that Marquez Snr may not be able to bear the strain of having his two boys in the same garage 🙂

Thinking outside the box for the moment means that, like me, you may be thinking of HRC using the opportunity to bring in some brand new blood rather than play it safe. And the obvious answer, as far as I can see, is for HRC to hire Jorge Martin. KTM won’t be in Moto2 next year so he could be at a loose end anyway and he already has been a Honda golden child, winning the Moto3 title for them in 2018. Of course, this is all speculation, but Martin ticks lots of the boxes for me.