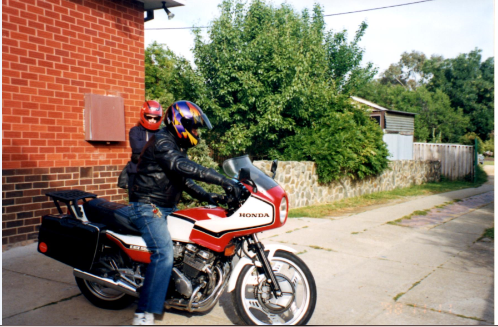 Since I seem to be on a roll with things that I HAVEN’T done in motorcycloing I’d best ‘fess up that I have done next to no pillioning. Now carrying a passenger on your bike is a bit like beer, you either like it or you hate it, there’s rarely any middle ground. And, apart from a couple of “around the corner to take a mate to the bike shop” jaunts, my pillioning experience is next to nil.

Now I add to that that my experience is next to nil in terms of being the rider AND as well as being the passenger. In my early days of riding I tried both and discovered that I HATED being  a passenger (I’m not in control) and I hated carrying a passenger. Of the two the second one was only slightly more tolerable.

Now, of course, the person who I’d have liked MOST to have been my passenger is my wife, but we discovered VERY early in the piece that that just wasn’t going to happen. Despite numerous tutorials on the subject and gentle bimbles around the block, she simply couldn’t get the hang of it. She tried, she certainly tried but, after about the 3rd attempt with her leaning left when I was trying to go right and vice versa, we called a truce and agreed that it just wasn’t a goer.

In fact, the only time I ever carried a passenger for more than a couple of kilometres was around 1995 and the whole episode was quite hilarious. At the time we owned a 100 acre block of land up in the high country, just over the Victorian border from the little town of Delegate. It was a block where about 2/3 of it had been logged and the other 1/3 was still forest. We gradually turned it into a weekend retreat, built an outdoor kitchen, installed a couple of old caravans with a big roof over both of them and a room in between and generally enjoyed escaping from the rat race in Canberra as often as we could.

It was about a 3 hour drive to the block and this weekend, for reasons that I don’t recall, Helena and my son and the in-laws had gone down and I and our daughter, Natalie, had stayed behind. After a VERY quiet night at home on the Friday night, Natalie and I both agreed that it was too damn boring at home so we’d go down to the block and spring a surprise visit on the family. Helena had taken the car so it was going to have to be on the bike. Now, for reasons that I have never been able to fathom, my daughter is a dead-set rev-head so she positively JUMPED at the idea and started getting suited up. I had no spare “proper” riding gear but I did tell her that she’d have to rug up because it got very cold down there (she’d been there lots of times so she knew) and she emerged soon after wearing just about every item of clothing she owned. 🙂 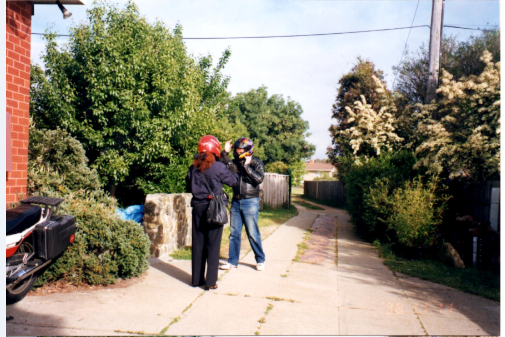 Natalie is a skinny girl but not even this photo shows how truly rugged up she was. The Michelin Man had nothing on her! Suffice it to say, it was quite an effort for her to get ONTO the bike, and, once on, she stayed there for the duration, even when I stopped for petrol. She later said that the reason she had done so was that it had been so difficult to get onto the bike to start with that she was afraid that she wouldn’t be able to do it again.

We wobbled off down the driveway (photos by our young next door neighbour) and, in the course of time, we arrived at our destination safe and sound with the surprise being complete. As she climbed off the bike all I could hear was that, despite all the “layers” she was still freezing. In the intervening years, the degree of cold that night has become the yardstick of how cold it is anywhere else! 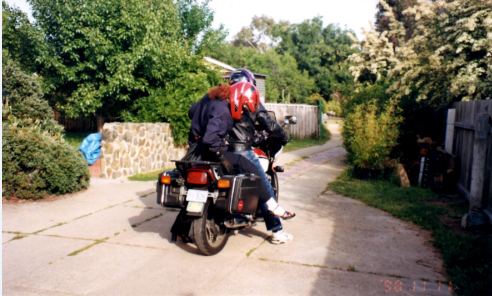 The cold notwithstanding, it was a great trip but, even with that major success behind me, I never again pillioned her or anyone else. I don’t mind taking the risk for myself but I just can’t bring myself to have someone else’s life in my hands. I greatly respect the people who DO (a good mate used to pillion his wife everywhere and she could fall asleep on the back while they were riding) but it just isn’t for me, than you very much.