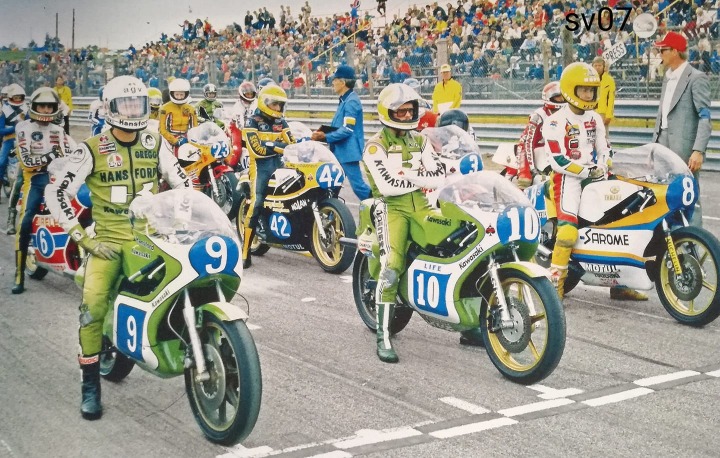 As I have noted many times, it never ceases to amaze me how photos from 40 years ago keep surfacing out of peoples’ collections. The above is a classic example. Firstly, the details. The year is 1978. The track is Karlskoga in Sweden and the race is the 350cc (or Junior) Grand Prix. This was Round 8 of a 13 round world championship that year and the records show that Australia’s Gregg Hansford (shown here on bike #9) did the “double” that day winning both this race and the 250cc (Lightweight). For the anoraks amongst us the other riders in picture are South Africa’s Kork Ballington (#10) who went on the win both the 250 and 350 world championships that year and Takazumi Katayama (#8), Fernandez (#6), Vic Soussan (#42) and another South African, Jon Ekerold (#3)

So, now you know as much about the picture as I do. Incidentally, it’s a cracking photo just as photos go and it’s held up well in the intervening 41 years.

But none of that is really what I want to discuss today. What I DO want to discuss is why Gregg Hansford (surely one of the most gifted motorcycle racers of the decade) did not win the 250 and 350 championships in both 1978 and 1979. Ballington ended 1979 as a 4-times world champion. Both Hansford and Ballington were riding what were effectively “works” bikes with Gregg’s bikes being fettled by the best Kawasaki mechanic of his era, Australia’s Neville Doyle. By anyone’s admission at the time, Gregg was a better rider, a demon under brakes and a superb tactician.

Well, this photo proves a contention that I started making at the time and have continued to make in the intervening years. Up until today, though, I have never had a photograph that proves my contention correct. Now I have.

The fact is that, despite being a faster rider, Gregg was at an incredible DIS-advantage when racing Ballington simply because he was so much BIGGER. This photo shows both riders, side-by-side and both in an almost identical pose and the comparison couldn’t be more stark.

Now, at the time I was used to seeing Gregg both on the bike and off it and he was, by anyone’s standards, a big boy. Not only was he tall but he was also well built and muscular. Though I never met Kork during his racing career, I have met him since and he is the little guy that this picture depicts him being. 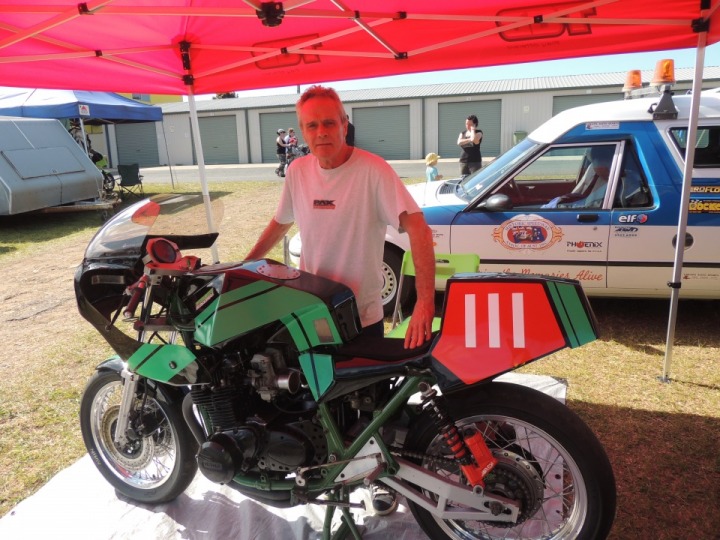 Here he is at the Australian Historics at Lakeside. Now, the Shadowfax IS a big bike but you can see that Kork isn’t a big bloke from this shot. I have always maintained that Gregg’s size worked against him when racing the smaller classes because he was a) Heavier than his rivals and b) Less able to “tuck in” to the bike to get the best aerodynamic advantage. Despite having my opinion rubbished by a few so-called experts whose agenda was less about the subject and more about point-scoring, I have always believed that Gregg could have won at least a couple of titles against Kork if he had been Kork’s size. Now this is all conjecture, of course. Who knows, if he HAD been Kork’s size maybe he mightn’t have been able to ride as well for some reason or another but that’s been my position and I’ve had no reason to change it.

NOW, and here’s the clincher. When I was attending the Historics in 2014 I had the opportunity of sitting down with Kork and interviewing him for MotoPod. We talked for more than half an hour and he spoke in glowing terms about his friendship with Gregg, his admiration for him as a rider and his sadness at Gregg’s untimely passing. Nearing the end of the interview I asked Kork straight up about my theory. I prefaced the question by saying that he could feel free not to answer it or tell me to mind my own business should he choose to do so, but he happily answered the question and confirmed my belief from all those years ago. Basically he agreed, saying that he felt at the time, and has since, that Gregg could have and should have won at least SOME of the 4 world titles in those 2 years, and WOULD have had he not been so tall and so brawny.

So, there it is, in some cases at least, size DOES matter. Now, to me both Gregg and Kork WERE champions anyway, so it doesn’t really matter but it was fascinating to hear from the man himself what he felt about the situation. Kork now lives in modest retirement in Queensland and spends at least some of his time working on his KR500 Kawasaki racer, the ill-fated attempt by the Big K to challenge Yamaha and Suzuki for premier class honours back then. I count it a privilege to have met him and to have been able to interview him as well.