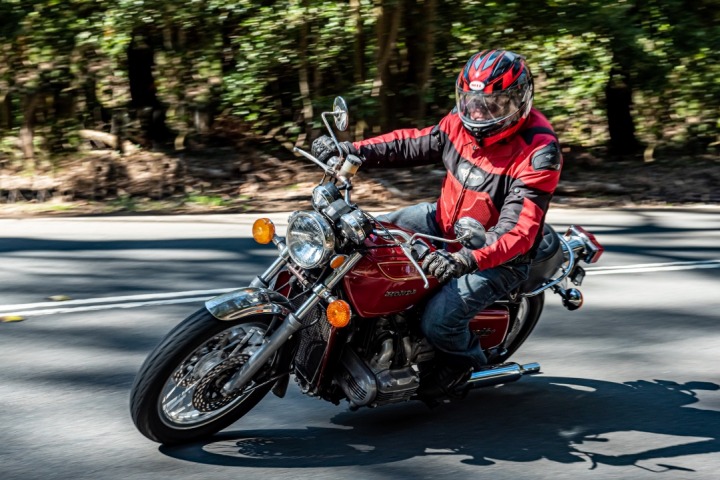 My local photographer, John Keogh, of Keogh’s Vision Photography, posted up on his Facebook page the other day that he was going to be photographing on Macquarie Pass on Saturday between 0900 and 1200, so I thought I’d take the opportunity of riding by him a couple of times and see if he noticed me 🙂

John is the favourite of most Sydney-area motorcyclists as he specialises in standing by the side of our well-used motorcycle roads for hours on end taking photos of the bikes (and cars) rolling by. He especially targets Macquarie Pass, Jamberoo Road, the Royal National Park, the Putty Road and the Wollombi Road and others as well as special events like the many shows that Kim and her staff host at the Grey Gum Cafe. At the end of the day he posts the thumbnails of what he has shot that day and, for a very modest fee, you can purchase the hi-res images, watermark-free.

I am no stranger to John’s work and we have met on numerous occasions. He’s just as cool a guy as the photos he takes. I must also add that Belinda, John’s wife, also does the motorcycle trail and her photos are equally impressive. Anyway, above is the result of my biimble up the Pass on Sunday. John took about 7 photos, 4 going up and 3 coming back down and they’re all great. The day was very glary and he had to fiddle with the “down” shots a bit but they’re still terrific in my book. Afterwards John said that he’d almost missed me because he was looking for  BIG Gold Wing. Well, I thought mine WAS big but I know what he meant.

Though it wasn’t by any means a long ride, I feel that I’ve now ridden Goldie enough to make some comments on it as a bike and where I think we’re going with it.

Firstly, of course, it’s big, c.290kgs, around 60kgs heavier than the VFR. You certainly notice this in low-speed maneuvering situations as well as when off the bike and moving it around (backing it into the garage is quite an art). However, getting it up onto the centrestand is just as easy as the VFR and that’s good because the conventional wisdom is that it is best to do so with this particular model (something to do with where the oil sits when it is parked or something like that.)

Once on the move the weight simply disappears. I guess due to the flat four design of the engine, the centre of gravity is much lower than modern bikes and it is easy to wrangle it around as soon as you get going. Low-speed handling is also excellent, the bike feeling really “planted” when going around roundabouts, etc.

Despite the fact that Goldie is wearing some VERY bargain-basement tyres (I’m not planning on ear ‘oling her) the handling is brilliant. There is no effort required to get her to change direction and she stays online where you put her all the time. I am amazed that I have worn off all the “new” from the tyres already (no chicken strips, even)

Having said that, the limitations of a 44 year old suspension are certainly there to see clearly. The front forks have new oil and refurbished legs but the springs are original and are well past their use-by date. Likewise the rear shock absorbers are original and have long since stopped “absorbing” So the less-than-perfect road surfaces around Wollongong do show the difference between the plush ride that I remember on Ray Laphams’s yellow bike in 1975 and mine now. At some stage I will organise an upgrade at both ends just to make it more pleasant to ride. In the mean time, I am happy to just enjoy riding.

As noted almost as soon as I did the first ride, the fuelling is imperfect. The idle is not smooth and the bike certainly does not have the grunt or the shove that I remember from all those years ago. As soon as Greg has finished his garage upgrade the bike will be going back to Canberra for a carbie overhaul which, I am confident, will bring the performance back to where it should be.

Likewise the other issues that need addressing will be taken care of at the same time. Funnily enough (though I shouldn’t be surprised, Greg said it would happen) the front brakes seem to be getting better (or maybe I am just getting used to them?)

Having all that hardware down low does mean an adjustment to the riding style, especially when pulling to a stop. The VFR doesn’t have those cylinders sticking out in the way when you want to put your feet down at the lights but I’m adapting to that as well.

The riding position is very “retro” but the original seat is surprisingly comfortable and I’m very grateful that the previous owner fitted the lower-rise handlebars rather than the “ape hangers” that were stock with this model. Despite the much more “sit up and beg” riding position I still find it more comfortable to ride with the balls of my feet on the footpegs rather than my insteps and I think this definitely helps to make the position better.

Old skool controls take some getting used to. The indicator switch is quite worn and has they have to be turned off manually once the corner has been negotiated. I’m thinking that a new switch block on the left hand side might be a good investment. You need the choke to start it but the VFR has a quasi choke/idling throttle so I’m already used to that as well.

I am loving the fake petrol tank with the storage compartment inside. It’s just the right size for my tool kit, wallet, mobile phone and log book paperwork, plus it has a wonderful “whizz-bang” effect for people who haven’t seen it before.

I guess the major difference is that it is close to unique. While I saw two other 1976’s at the CEMCC show the other weekend, that’s hardly typical. People look at you when you’re riding by and other motorists also look twice. I’ve even had some Harley riders nod at me as they are heading by in the opposite direction. 🙂

It will never be a daily riders, but that’s not the point. Even with the issues that still need to be addressed, I am enjoying riding it more and more each time I ride, and, after all, isn’t that what it’s all about?

On another subject, Sunday was the annual Folk by the Sea folk festival in Kiama. Held in the pavilion at Kiama showground, our group, “Three Sixty” was allocated a tiny room that could JUST about hold 50 people; certainly shows what the organisers feel about the local talent. The size of the venue actually meant that doing the show acoustically was probably going to be the best idea. The organisers promised us that we would, at least, have three microphones and we agreed to play unplugged. Of course that didn’t happen, when we went to set up we found that they only had TWO microphones and, despite finding another one in a hurry just before we were due to start singing, there wasn’t a socket to plug it in to. So it ended up being an acoustic show like we expected it would be. At least they allocated us 45 minutes this year rather than the half an hour of previous years so that was good. Since we were doing the show unplugged, I chose to use my 1969 Maton CW80-6. Even though it does need new strings, it still sounded good.

As the previous act packed up and left the room so did most of his audience, great, looks like playing to empty seats and our wives (not that there’s anything wrong with THAT). But, no sooner had we started playing than the room began to fill and, in hardly any time at all, there were no more seats available. Wow, this fame could easily go to my head.

We did our usual collection of Seekers, Peter, Paul and Mary and Dylan numbers and each of us also did a solo as well. Mine was the Chad Mitchell Trio song “There once was a musical troupe” a folk singing cautionary tale. It was well received as were all the other songs we sang. The audience sang along with gusto with all our numbers and at times I thought that we were just part of a CHOIR rather than the performers. There were some excellent voices in the audience, too! At the end we received some warm applause as well as some very nice comments from many members of the audience about the songs and the way that we performed them . It’s only taken me 50 years to become an overnight sensation 🙂

Anyway, that’s about it for today, thanks for reading, as always, I’ve still got 57 days left on my Historic Vehicle log book trial so I might use up one and do a lap of the RNP this afternoon. Why not?