You are here: Home / News and Updates / Where is the DENCO triple triple? 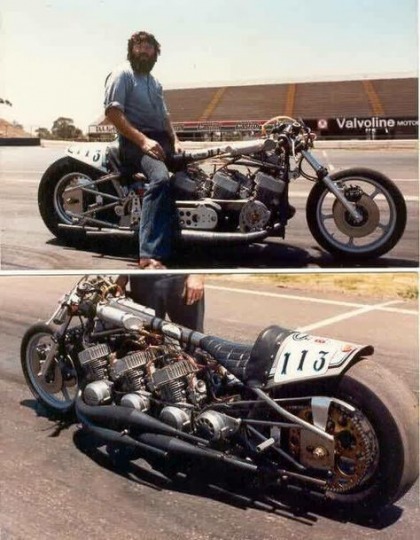 I’m friends with Russ Collins Jr on Facebook and am following with interest his posts about the restoration of his dad’s iconic 1970s drag racing bikes, the triple-engined Honda (the “Atchison, Topeka and Santa Fe”) and the V8 bike (the “Sorcerer”). The triple was demolished in an horrific accident in 1976 and the Sorcerer was retired after becoming the fastest motorcycle drag bike in history achieving a 7.30 second pass with a 199mph terminal velocity (this record stood for 11 years).

As noted in my previous article about the drag-racing excesses of the 70s, these monsters ruled the earth back then, along with T C Christensen’s “Hogslayer” a dual-engined Norton powered drag bike and Joe Smith’s dual-engined Harley dragster.

Then, onto the scene stepped a new challenger, the DENCO Engineering Triple Triple. A 3-engined drag bike powered by three highly modified Kawasaki 750cc two stroke engines. With a frame designed and built by legendary drag racing pilot, Boris Murray, it was, by all reports, the LOUDEST bike of its era, shattering eardrums at a distance. The picture at the top of the article is the bike in question. It was not only loud but fast and ran 8 and sub-8 second passes in its prime.

But, nothing lasts forever and the day of the monsters passed, made redundant by smaller, single-engined bikes that were lighter, more powerful and faster. Today, the “multis” are barely a memory unless you start talking to old fogies like me who get misty over the stories of those glory days.

So, why write about them now? Well, unlike both the Collins bikes that are nearing the end of their restoration and will soon run again, the DENCO bike’s later history is somewhat shrouded in mystery. What I DO know is that, sometime in the 80’s the bike made its way to Australia and was last seen gathering dust in a garage in Melbourne. In the 90’s, back in the early days of the internet, I found an article about it including the pictures above which were taken at Calder raceway in front of the grandstands there. I emailed the attached address but received no reply and subsequent efforts to trace it have been fruitless.

I feel sure that the bike is still here somewhere, probably still in Melbourne, covered by a tarp in some dim back shed, owned by someone who has every intention of restoring it “one day” So, does anyone know? Do any of my readers have any information or clues as to where the DENCO triple triple is? I’d love to know. For reference sake, here is the email address of the lady with whom I tried to correspond about it all those years ago, does the name ring a bell with anyone? The lady’s name is Nancy Karasiewicz and her address at the time was nancysk@bigpond.com Does anyone recognise the gentleman sitting on the bike in these pictures?