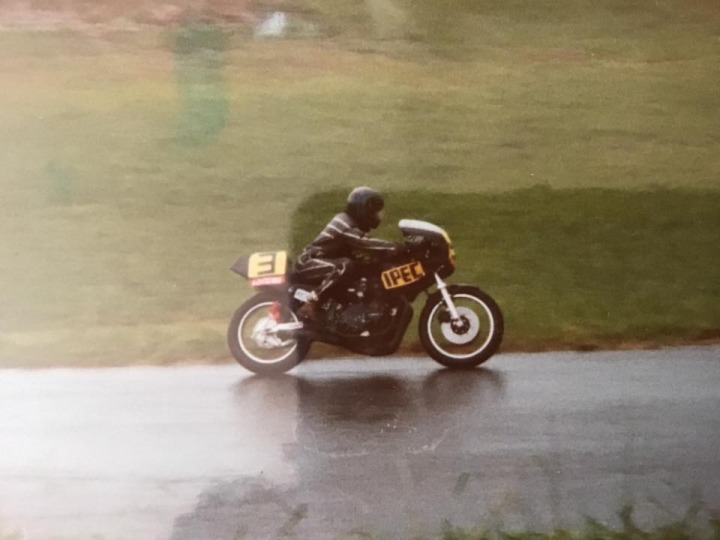 It is now over 7 years since the restoration of the Shadowfax Kawasaki was completed. It was shown at the BSFoS in March 2012 and won two trophies, a stunning surprise to both Dave and myself. In the intervening period of time a few more photos of the bike in its racing period have emerged from various collections and it always amazes me that photos that have remained in private hands and have never been published could suddenly appear after, in this case, 38 years.

I blame social media for this and you don’t have to hang around Facebook for very long to become aware that there is still plenty of good stuff in peoples’ bottom drawers and filing cabinets. Two such examples turned up yesterday and both the photos are noteworthy for several reasons. The photographer is Warren Cosier and these photos were obviously taken from the spectator stands during the soaking wet Coca Cola 800 race at Oran Park in February 1981. Warren published about a dozen photos in one batch, all similar to this one. Yes, they are a little fuzzy but I give him props for even getting his camera OUT on that foul, rainy day.

The top photo is unique because it is the only photograph I have of Neil Keith, the second rider in the Shadowfax team. Neil was tall and skinny, had long blonde hair that was always tied in a long ponytail. His own road/race bike was a Kawasaki 750 triple and he rode it ferociously. He contributed both money, parts and time in the building of the Shadowfax but, even if he hadn’t, he would have been the logical choice to ride it in the race.

Unfortunately, as detailed in the restoration story, Neil didn’t have the discipline to ride the bike the way it needed to be ridden in an endurance race. Time and money had not allowed the team to remove the alternator and blank off the place where it had been so it ran WITH an alternator and the alternator cover partially filled with Araldite to avoid oil loss in case the case became ground through on left-hand corners. This failing was remedied by the time the bike raced next at Macarthur Park and at Bathurst.

However, since the bike HAD to run with the alternator, strict instructions were given to both riders that they should ride the bike carefully in left hand corners and avoid, as much as possible, “touching down” on the alternator cover. At the end of the first and second stint (Kent “doubled up) at the first rider change, Kent returned the bike with the alternator cover almost like new, things were looking good. But, when Neil went out for his first stint, he either forgot or ignored the team manager’s instructions and it wasn’t long after that he returned to the pits with oil coming out of the abraded alternator cover. Dark looks and muttering all round. The decision was made to ask if anyone at the track had a spare alternator cover and I begged and pleaded over the PA for some time until one of the boys came up and told me that a spectator had offered the one off his bike on the proviso that he get it back and be able to ride his bike home at the end of the day.

At least an hour had been lost by this stage and, once the bike was fixed, it was ready to go back out again. However, Kent had done a double stint at the start so he couldn’t go out again without “timing out” on the maximum amount of time each rider was allowed to ride. Neil would have to do the next stint but, for reasons that were never explained, he refused to go out and ride again. Nothing could change his mind so the bike remained in the pits, fuelled up and ready to ride until late in the day when Kent got back on and took the bike out to at least see the checker without timing out.

So the bike did finished but was not listed in the finishers due to not meeting the minimum amount of laps needed to be run to be classified  as a finisher. 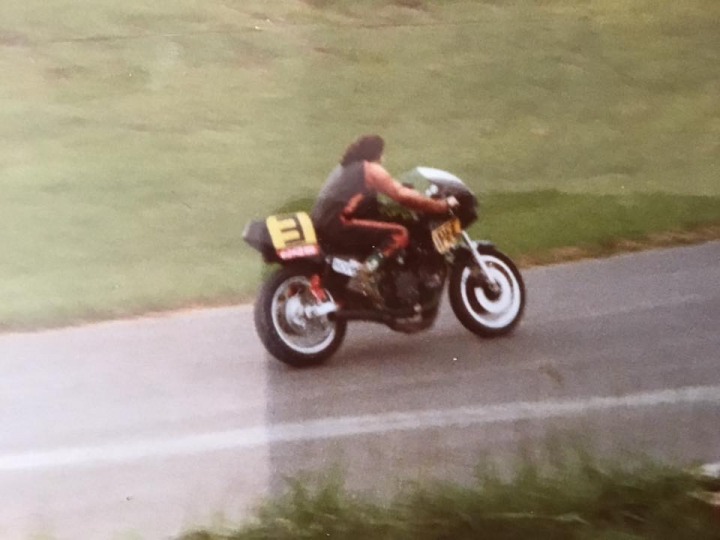 This photo is equally fascinating. This time it IS Kent on the bike but, like the riders in the rest of the photos in Warren’s series, he is not wearing a helmet. Very perplexing, but then I remembered that there was a parade lap before the race where the riders round around for a lap without helmets to acknowledge the crowd. Ludicrous, I know, but they did do some strange things back then.

I am very grateful to Warren for letting me add his photos to the Shadowfax collection. Isn’t it amazing that this could still be happening?