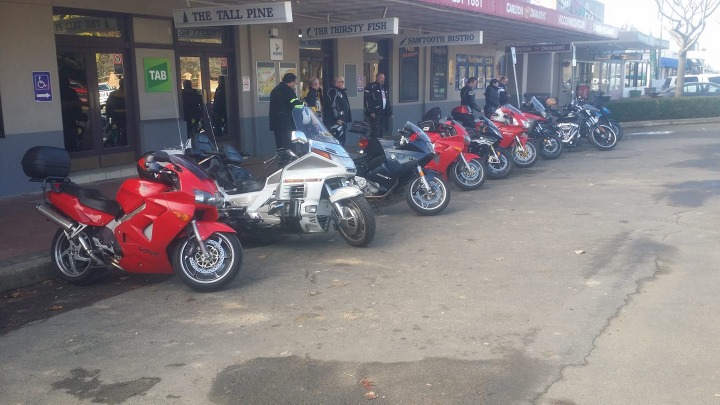 I joined Netrider, the national motorcycle forum, in 2005 but, despite that length of membership, I’ve only ever been on one Netrider ride and that was to Merimbula in 2006. So, when someone advertised the 4th Annual Brass Monkey ride, my interest was piqued. As you all know, I lived in Canberra for over 20 years and rode through every winter so a ride in the mountains behind Sydney in the middle of winter didn’t sound daunting at all, in fact it sounded like fun.

As it was a Sydney-based ride, the starting point was the Maccas at McGrath’s Hill. For those of you who know your Sydney geography, McGrath’s Hill is just a bit east of Windsor so getting to the meet point at 0830 for an 0900 departure was going to mean leaving here at 0615, not an entirely attractive prospect. The fact that it WAS a Brass Monkey ride probably means that I should have ridden up on Sunday morning, but my mate, Wayne offered the services of his daughter and son-in-law’s house at Blacktown so that we could stay on Saturday night and only have a short ride to the set-out point in the morning. An offer too good to refuse. So, Ron, Wayne’s brother-in-law, Paul and I rode up on Saturday night, watched the MotoGp qualifying on James’s UBER TV, had a fabulous dinner with them and were all ready in plenty of time to head out to Windsor on Sunday morning.

However, we awoke to see (sort of) the suburb shrouded in a thick fog, dammit. As noted previously, I do not have a Pinlock visor so the ride  to McGrath’s Hill was trying in the extreme. However, we did make it and met up with some of the crew who were already there. Not long after we arrived, a large contingent of Alfa Romeos arrived, heading up to Grey Gums for a Sunday morning drive. One hardy owner in a 1971 Duetto was driving with the top down and had driven across from St Ives on the north shore, tough. 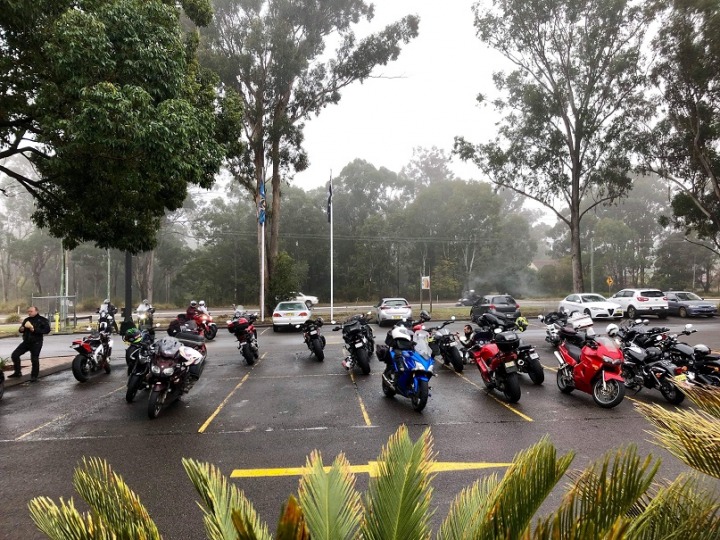 I was hopeful that, like the last time when we encountered fog, it would be cleared by the time that we set up, but it wasn’t looking good. While Paul was away shooting the breeze with the Alfa fraternity, I thought I’d better introduce myself as I had never met any of the crew. Paul does Netrider rides all the time an he knows all of them. I attached myself to a circle of rugged-up riders and I figured out that the big guy in the beanie was Wingman, rider of the big ‘Wing in the park, so I stuck my hand out and said, “Hi, I’m Phil.” He looked a little flustered so I spelt it out in case he hadn’t got it. He still looked confused and, just then, Bill, the ride leader, arrived and said, “Oh, Tony, that’s not Paul you’re talking to.” “Get out of it,” replied the Wingman. “No, that’s him just coming across the carpark now,” Bill said, “You’re actually talking to Phil, Paul’s brother.” Tony’s reply was classic. 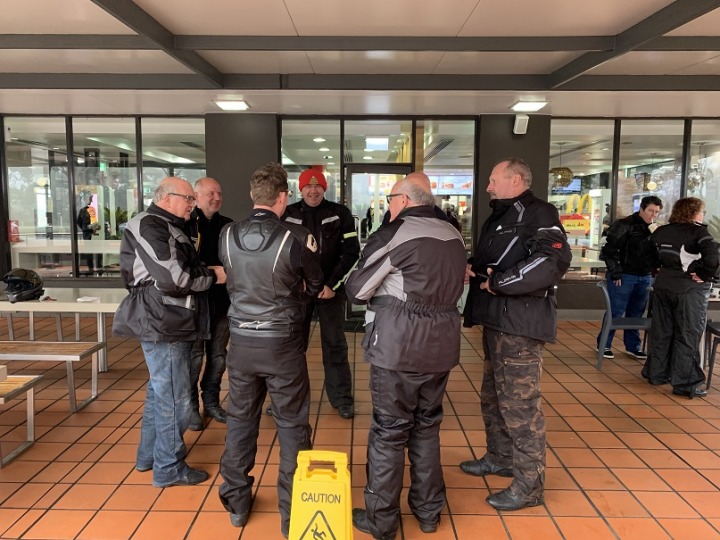 Continuing the fine tradition of sowing confusion wherever we go, we had zinged another victim.

Paul’s arrival was timely, though, as he said that one of the Alfa drivers had come down from the mountain and told him that, once you got past Kurrajong, on the way up the Bells Line of Road, the fog was gone and it was a beautiful sunny day. Hooray.

And so it proved to be. Breaking out into the sunlight was a real treat and we made good time up to Lithgow where we stopped at a cafe for coffee. It was there that Wayne discovered that he had all of James’s keys in his top box, having borrowed them back at his place to open the garage and having failed to return them, whoops. Fortunately, James had a spare set.

While it was billed as a Brass Monkey ride, it wasn’t really that cold so it made for pleasant riding. It had been around 13 at Windsor and, once we broke out into the sunshine, the temperature quickly rose to around 18. From Lithgow we headed east back along the Great Western Highway before cutting south along one of my favourite roads, the backroad into Oberon. This road is filled with ups and downs and sweeping corners, but, in deference to the wet conditions, we took it a little easier than we would have had it been dry. Noting that a truck or something had deposited copious amounts of diesel on the road in left hand corners also cooled the enthusiasm a bit too. We later passed a Coaster bus and then the diesel spills stopped to we guess it was he who had been coating the road. Grrr.

At Oberon we gassed up before hitting the Royal Hotel for lunch, and what a great lunch it was. I ordered the pumpkin soup and it was awesome. The pic above is of the bikes parked outside the pub.

After lunch the Sydney contingent voted to head back home the way that they’d come, stopping for coffee somewhere along the way. Wayne, Ron, Paul and I headed south west out of town and onto the glorious sweeping roads that lead to the Abercrombie Pass. Being Sunday afternoon we encountered the expected number of numpties in cars but we made good time and pulled into Goulburn with the prospect of getting home before dark. A communication “glitch” meant that Ron, who was in front of the group at Marulan, went straight on up the Hume rather than taking the planned scenic route through Wingello, Tallong and Penrose, so Wayne went ahead with him and Paul and I tackled the intended route by ourselves. By Robertson it was getting really cold (well, it was late) and a quick dash down the Pass was totally nixed by a low-loader carrying a huge load of haybales that held up dozens of vehicles heading down and turned the Pass into a parking lot until he reached the turn-out lane near the bottom. By then it WAS dark but, once we cleared him we motored on home, I pulled into my driveway around 1645.

It certainly was an enjoyable ride, around 650kms altogether (around 120 on Saturday arvo, the rest on Sunday). As winter rides go, it was great but I wore my mid-season gloves and didn’t use my heated grips until we were heading down through Roberston so it wasn’t really THAT cold. Planning of the 5th annual ride is already in progress and I’d certainly line up again.