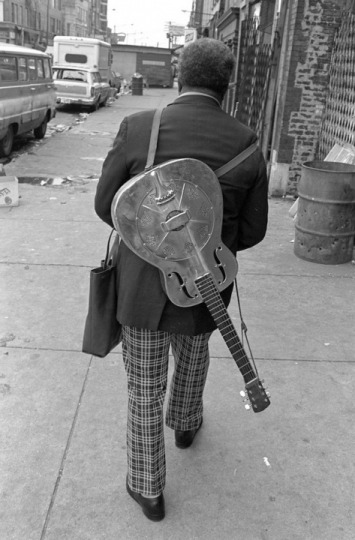 One of the joys of riding in Canberra while I lived there was exploring the backroads. Yes, I know that visitors to town are more likely to be confused by Canberra’s URBAN roads network (and justly so) but, out of town is where the real enjoyment of the ACT’s roads are to be found. South west of the city there used to be hundreds of acres of pine forests, serviced by some glorious riding roads. Locals still use these roads, of course, but the enjoyment (for me, at least) would be considerable reduced now since the January 2003 wildfires decimated the pine plantations and left the countryside looking like the aftermath of a nuclear war.

The Cotter Reserve and the adjacent dam were great picnic spots, especially in Autumn when the deciduous trees were putting on their show and the Cotter Pub, at the end of the car park, was a noted gathering place for Canberra’s motorcycling community. They also made a great coffee for those of us who didn’t indulge. Sadly the pub was also destroyed on the 18th of January and, as far as I know, it was never rebuilt, a real shame. 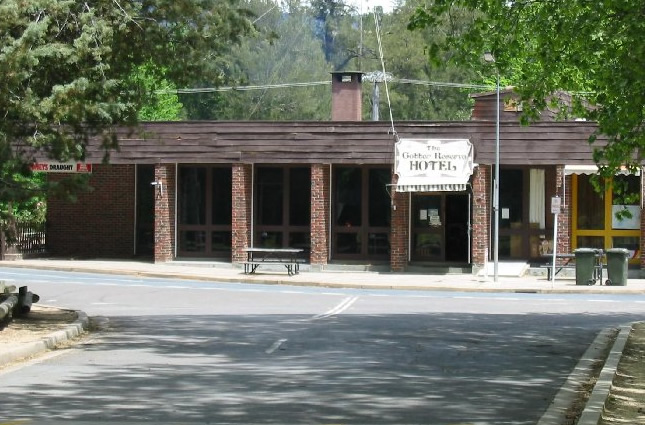 On the subject of the Cotter, and this is where the story REALLY starts, I used to ride it a lot when I was living in Canberra and I also used to do a lot of casual relief teaching at the Uriarra school in the forest (boy, you found out how the other half lived there, I can tell you, first time in my long teaching career that I had a Kindergarten kid tell me to eff off) But, anyway, I always took my guitar with me when doing casual days, I couldn’t tell you the number of times it got me out of a spot. “But how did you do that when you rode the bike to school?” I hear you ask. Yes, I nearly always rode the bike, a great ride there and an equally great ride home (apart from that morning when it bucketed down and I had to spend the whole day in the classroom in soaking wet clothes, but that’s another story).

I used to sling the guitar over my shoulder and carry it on my back with the body behind my back and the headstock facing downwards, as shown in the photo above. The strap crossed my back diagonally so the headstock was across to the side and went down beside the seat. After having it nearly fall off one day I realised that I’d better make the strap more secure so I wired up the holes where the end-pins went through and it never happened again. Anyway, back to the Cotter. As I noted above, I always enjoyed the ride and, at the time, I was going through my “how far off the seat can you slide while going through the corners” phase. This was all good fun until, one day on the way to school, in a tight right-hander up in the hills, hanging off like Randy Mamola (at least I THOUGHT I was) I heard a loud TWANG. As you do, I sat up, somewhat startled and tried to figure out where the noise had come from. I checked the guitar and it was still firmly attached to me so I carried on, a bit mystified.

When I got to school, I took the guitar off first, as you had to do, and, as I was putting it down, I noticed a big gouge mark in the headstock where some wood had been broken away. Yep, I had been hanging off so far that the headstock had hit the road and the resultant contact damaged it quite badly. Needless to say, I was a little more circumspect when riding with the guitar on my back in the days following.

And, on the same subject, one of my favourite Wizard of Id cartoons, used, I am ashamed to say, without permission., 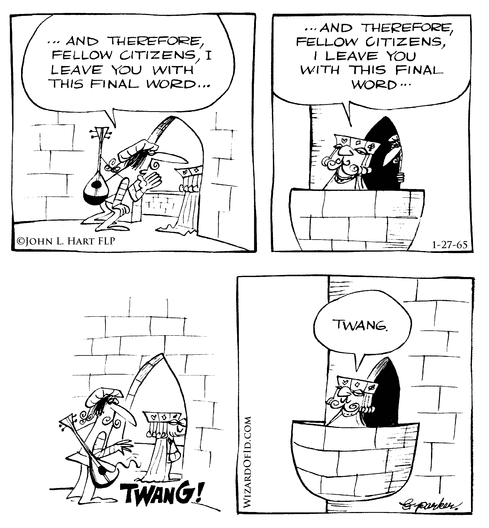