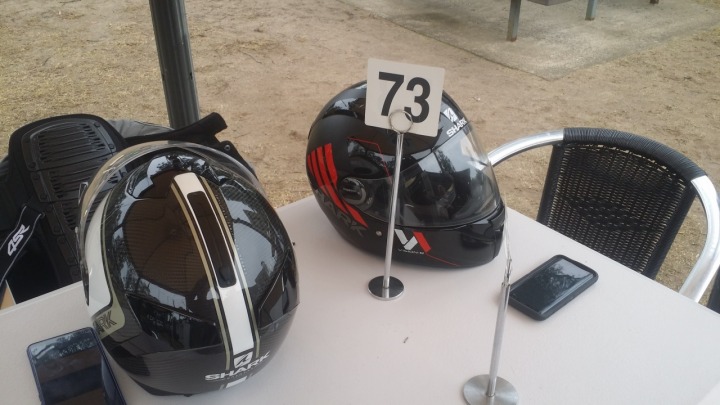 Paul’s neighbours across the road had a Putty ride planned for yesterday. Margie wanted to try out her new (to her) FZ6, Craig had a rare weekend off work so it seemed like the ideal thing to do. Rendezvous time was 0700 at Paul’s place but, since that would have entailed me riding south to go north, they arranged to meet me out on the freeway just north of Dapto. A quick look at the BOM website indicated that it wasn’t going to be the greatest of days with a top of 17 degrees predicted for Dapto (well, it IS winter, after all) However, it was clear that it would be much colder than that up on the tops so it was winter gear all round.

Now winters here can be (and usually are) very pleasant. Even if the temperature is down, a sunny day can be a great day for a ride. Sadly, this was not to be. By the time the crew picked me up around 0735 and we started heading north, it was overcast and cold, temperature on the dashboard showing 11 degrees. Well, it will get warmer, won’t it? It is the long weekend so it is the usual Double Demerits weekend but we weren’t planning on doing anything silly so that really wasn’t a consideration.

As soon as we started climbing Mt Keira the temperature started to drop and it was 9 along the tops and, by the time we got to Picton, it was 7. Still no sunshine, we should have known. We got a great run up the backroad and even a surprisingly traffic-free run through Penrith, though the temperature was refusing to get into double figures. We press on.

However, the situation grew considerably more complicated just after we joined the Northern Road as a band of fog closed in rapidly and left us crawling along at around 60, eyes out on stalks and being super careful. The other three had Pinlocks on their visors, I didn’t and, as luck would have it, I was leading the group at the time. We made our way into Windsor, riding by Braille and on to Wilberforce, our intended fuel stop. After gassing up it was time for a counsel of war. The consensus was that we grab a coffee at the bakery next door and wait to see if the fog would lift. I say “if” because both Paul and I have seen many days on the Putty where the fog never lifted for the whole day so we were quite prepared to can the ride and go home if necessary.

While we were having our coffee, the fog DID lift, but we had waited nearly an hour for it to do so. So we set off again, hoping to make good time to Grey Gums. Fat chance. I know it is a long weekend, but the traffic on the Putty was ridiculous. Grinding up out of the Colo, one of the neatest and most enjoyable section of the lower Putty run, we got snarled behind a huge glut of traffic, around 20 vehicles at least including cars, 4WDs, a removalist van and three, yes THREE wobbleboxes. We didn’t get past them till just before the servo at Colo Heights. Unfortunately we had to stop there for a pit stop as the toilets at Wilberforce are (still) out of commission. Come on, Liberty, get yourself organised.

By the time we were ready to go some of the traffic had re-passed us as well as some quicker cars and bikes. It was going to be a slow run to Grey Gums. The fact that the RMS has also cut off a lot of overtaking opportunities along the flats by installing double unbroken lines meant that we didn’t get to GGC until after 11 and STILL the sun hadn’t come out. Temps were still hovering around the 12 and 13 and already it looked like that was the way it was going to stay.

We ordered and got our lunch (pumpkin soup, home made, yum) and decided that it was clear that a run on the Ten Mile simply wasn’t going to happen. By the time that we would have completed that, an estimated arrival time back home was close to 1800 hours, plainly it wasn’t going to happen. So we enjoyed a leisurely lunch, chatted with Kimmie, socialised with Shiloh, the GGC dog and turned south. The fog hadn’t become a problem but even with good quality winter gear, the cold does start to seep in so a stop at Peppercorn at Mulgoa (yes, they’ve changed its name but it will always be Peppercorn to me) for a hot coffee and a warm-up was well and truly in order. The southbound traffic was nowhere near as bad as in the morning and we made good time to Picton. Craig had to stop for a pit stop so Margie waited with him while Paul and I soldiered on intending to wait for them at the Mt Keira turn-off if they hadn’t caught up by then.

At the Hume Highways lights, Margie pulled up beside me and said that they were going to head straight home. She had lost 2nd and 3rd gear in her gearbox and was having to row the bike along so she didn’t want to do Mt Keira. So we parted company as Craig came up behind to “shadow” her home and we scooted down the mountain.

The closer to home we got the clearer it became that we would never have been able to do the Ten Mile. Still, the road is still there, we’ll just have to do it another day. Margie bought the bike private sale, not from a dealer, so it looks like she will have to bear the cost of the gearbox repair herself. Bummer.

Any day in the saddle is better than painting the eaves, but today the sun is out, there isn’t a cloud in the sky and the temperature is 20 degrees. Sod’s Law, isn’t it?

In closing I need to report that Graham “Checkers” Stewart, Australia’s best flag man, passed away last night. In the mold of Larry Wilcox and Glenn Dix, Graham made waving a flag at race meetings into an art form. Club day or World Championship meeting, it didn’t matter and he was a heck of a nice guy into the bargain. Sadly it IS the chequered for Checkers. 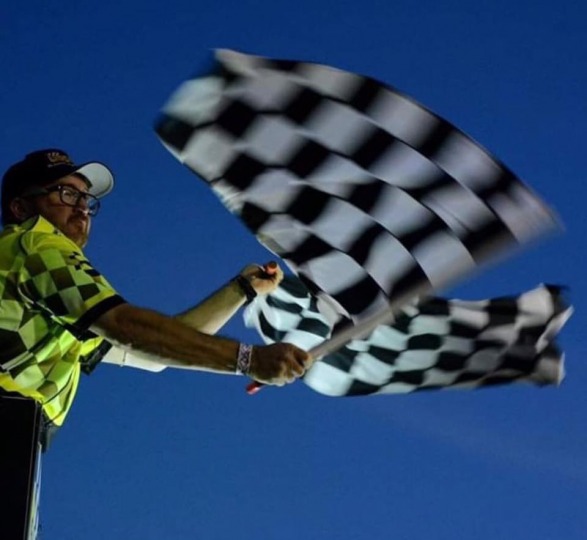