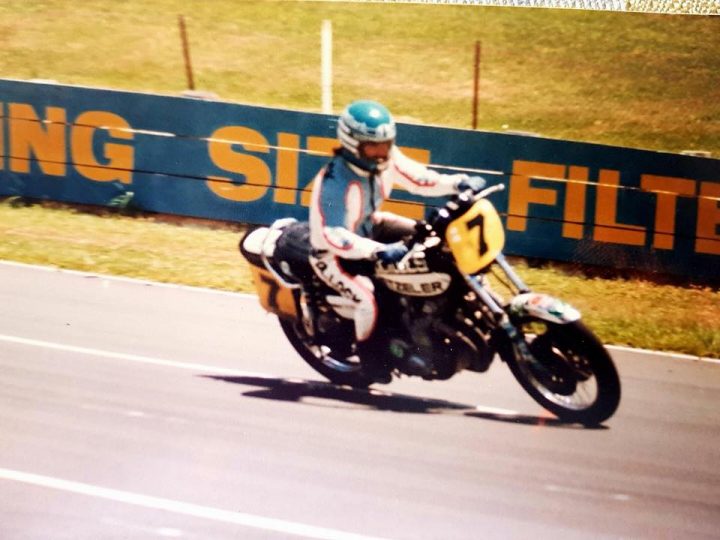 Every now and then you get a reminder that you don’t really want. It was so just a week or so ago when a racing friend from Queensland posted up this picture. It shows the late Greg Pollock, one of the real hard chargers of production and superbike racing in the 1970’s. Wayne posted the picture as an in memorium, noting that it was 30 years ago that weekend since Greg was killed in a racing accident at Brisbane’s Lakeside Raceway. The weekend was the 12th-13th August and Greg was only one of the riders who fell victim to adverse circumstances that weekend. For him however, the consequences were fateful and we lost another shining star of our sport that day.

Now, as if that wasn’t bad enough and Greg is still sorely missed among the close-knit Queensland racing fraternity, that weekend was to be one of horrendous occurrences. Please bear with me while I recount how that tragedy often loves company.

That weekend was also a round of the NSW Road Racing Championships at Sydney’s Amaroo Park Raceway. The event was being run by Northern Districts Motorcycle Club, one of the half a dozen “live wire” clubs in the Sydney region who fostered and encouraged our sport. It was a two day meeting and the club had asked me to commentate. It was a prestigious meeting as state title meetings were in the day and there was a huge entry, necessitating that the racing be spread over the two days. But the meeting was being held under somewhat of a cloud. Sydney’s racing community was still struggling to come to grips with the death of one of its own rising stars, Neil Warnes Jr, who had died in an accident at the track just three weeks before. Then, on the preceding weekend, a SuperKart driver had died in a practice accident so the atmosphere was a little tense. Nothing could have prepared us for just how much worse the weekend was going to get.

In Sydney at the time there were two riders who tenaciously campaigned on Laverda 1000 “triples”. One was the ex-pat New Zealander, Owen Hughes and the other was Dave Braha. Both rode near identical green “Jotas”. Of the two I knew Dave better. He was tall, gangly and forever smiling. One of nature’s true gentlemen he was loved by all. I guess you are already guessing what I am going to say. In the middle of the Production Race, Dave came off on the run down to Honda Corner. The corner hooked left very sharply but, for some reason, Dave swerved right and the Laverda got off onto the grass. From there it careered down the outside of the track until it hit the earth retaining bank on the outside. It threw Dave off and ran up the bank until gravity took over, the bike falling onto the prone figure of Dave, lying at the foot of the bank. He never stood a chance. It is a gruesome video that still plays in my mind.

Dave’s girlfriend was working in the lap scoring booth next door to the box. To say that the scenes that followed were harrowing would be the most massive of understatements. He was a kind and lovely man, the gentlest of characters that you could ever meet and yet, suddenly, he was gone. Life is cruel.

They say misery loves company and it wasn’t until the next day that we were to find out just how true that is. That same weekend, competing in a nothing meeting on a non-descript track in Belgium, Australia’s Ray Quincey, one of the finest riders this country has ever produced, also felt the cruel hand of fate. It is believed that a mechanic incorrectly mixed the two stroke fuel for Ray’s TZ350. In any event, on a wet track, the engine seized and Ray was thrown off. He skidded across the track and crashed, back first, into an unprotected telegraph pole on the edge of the track. I remember him saying later, “I woke up and I reached down to touch my leg because I couldn’t feel it. It was like patting a dead dog.” Ray’s spine was crushed and he became a paraplegic. To add insult to injury, the dead-beat Italian team for whom he was riding, never paid him a cent that they owed him, never offered any help towards his medical expenses or his repatriation back to Australia and never even said they were sorry. It was left to Ray’s parents to bring him home, pay the medical bills and bear the on-going expense of his rehabilitation. 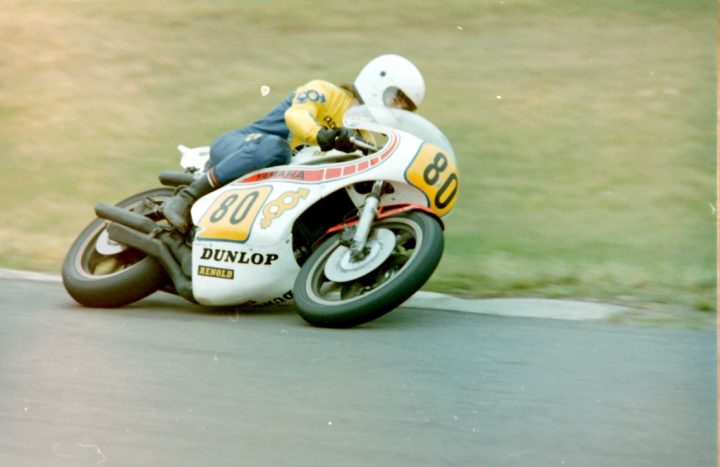 It was, perhaps, the blackest weekend in Australia’s racing history and it will certainly live in my memory for as long as I am around.

But then, this morning, Facebook reminded me that there IS a fine line between pleasure and pain when it popped up this picture. 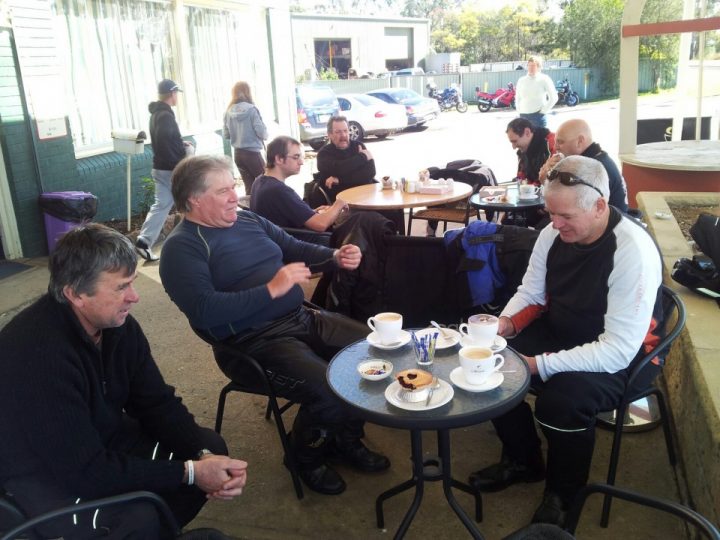 The photo was taken 6 years ago this weekend. It was an Illawarra Riders group ride and it was the last ride that I would share with my good friend, Mick McCarthy (centre of pic). Mick was a larger-than-life character in every sense of the word but none of us were to know just how soon he would be gone. On a Snowy Ride later that year he misjudged a closing radius corner and slipped off the road. With only a wrist injury and with help from his mates he was transported by ambulance to Cooma Hospital. Unfortunately he suffered a cardiac arrest during the journey and the ambulance personnel were unable to save him. We miss him terribly and our annual Snowy Ride is named in his honour.

I apologise if my post today is morose, but life is not always a bed of roses and it is good to be reminded every now and again just how fragile life is and to remind ourselves how we should treasure it and enjoy it.