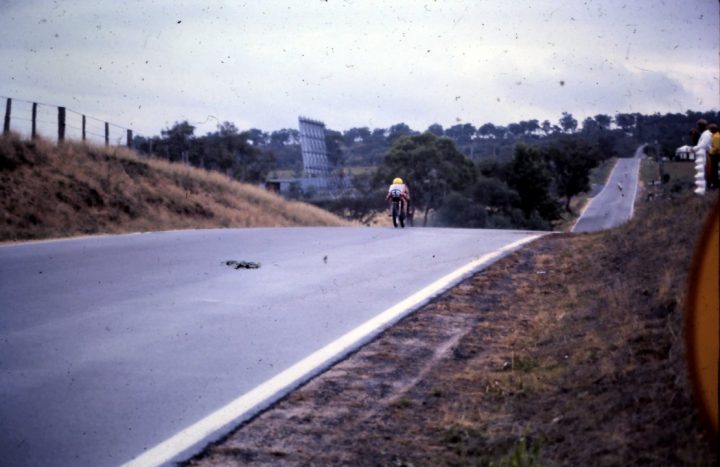 Long term lifers will know of my passion for Bathurst and, more specifically for the Mount Panorama roads that were used as a race track for many, many years. As a youngster I knew about Bathurst (the name of the town became synonymous with the name of the race track) from the endurance car race that was held there, starting in 1963 (I was 14). The race is still held on the circuit and it is now one of the few events that are held there for reasons of safety particularly.

But Mt Panorama was originally designed and built as a bike racing track and bike races on the layout go back for decades before the invasion of the car races. In the 1960’s the Easter Carnival was a 2+4 meeting with races for cars and bikes, but, by the time that I started going there, Easter was just for bikes and the October long weekend was for the endurance race for cars.

My first Bathurst was very soon after my first bike race meeting. The Australian TT was at Laverton in February 1976 and Bathurst was on the weekend of April 16th. I remember it so well and not just because of the bike races. It was exactly one week since the birth of my first child and I recall that I wasn’t the most popular person around when I told my wife that I was going to the races. In retrospect it WAS a very selfish decision and I am reminded of it every now and then just to let me know that it wasn’t one of the shining moments of my early days as a husband and father.

It rained on Sunday and, by the time we got back to the car we were soaked. Thank goodness the Renault 12 had a great heater. Japanese factory “ace” Takai had blitzed the locals on his “works OW31 750 and he’d sent the locals packing in no uncertain terms. The Yamaha factory repeated the dose for the next two years, sending Takai out again in 1977 and then Hideo Kanaya in 1978.

But this article isn’t intended to be a story about Bathurst, or the riders, or the races. Rather it is about a particular place on the Bathurst track that was one of the features that made it unique. And, while it is Sunday as I type this, I have named the article in honour of the famous Bathurst “Hump” A couple of maps should help the explanation. 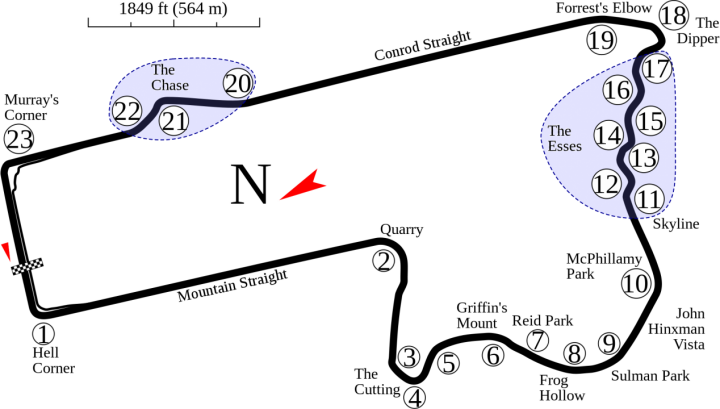 The most obvious feature is the long Conrod Straight. Here is the map of the track as it was when I first started going to Bathurst. 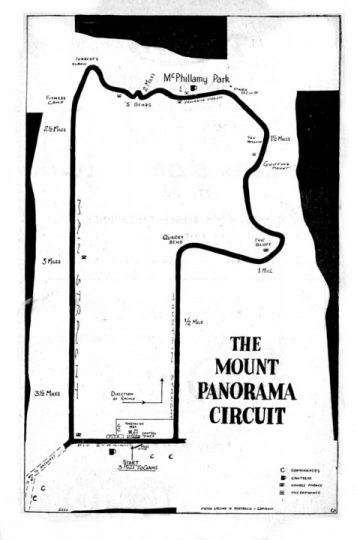 As you can see, there is a significant change to the layout  Mount Panorama was a dangerous layout. The bikes climbed up the mountain one one side of the hill and then plunged down the mountain on the other side. Even in 1976, Takai was clocked at 300km/h down Conrod Straight. With such speeds came some ferocious accidents, culminating in the death of privateer V8 car driver, Mike Burgman during the Bathurst race in late 1987. The sport’s legislators decreed that the speeds on Conrod had to be curtailed and so the infamous “Caltex Chase” that little right/left wiggle near the bottom of the hill was built. By 2000, the last year that a bike race was held at Bathurst, bike speeds had increased so much that Kevin Curtin, on his Yamaha R1 superbike, clocked 300km/h in the very short straight between the exit of The Chase and Murray’s Corner but that’s another story.

The “Hump” of my story stood exactly where the chase is now and it was the problem of cars and bikes getting airborne over it that led to the track being removed. The run down Conrod Straight was not a mere downhill progress. From Forrest Elbow to Murray’s the road was a roller coaster of ups and downs culminating in the hump. In the first year that I photographed Bathurst I couldn’t get close-up to Conrod because I didn’t have any media accreditation. Instead I photographed from the pits, on the short straight between Murrays and Hell Corners.

From 1977 onwards my media accreditation allowed me to get out to the edge of the track and see the action and it was only then that the full ferocity of Bathurst really hit me. The big bikes, the TZ750s and Kawasaki KR750s were doing 300 down Conrod and, as they crested the hump they would literally take off. If the bike was by itself, there would be a period of silence as the sound of the tyres on the road stopped and then there would be a gut-wrenching thump as the bike landed again. You could hear the suspension groan as it went on to full compression and then the sound of the engine screaming as the rider frantically down-shifted for the 60 km/h Murray’s Corner would begin. It was a truly terrifying experience and I was just standing on the side of the road! In 1975, the year before I started going there, Victorian ace, Ross Barelli, lost his life just here as one of the front brake disks of his RG500 Suzuki disintegrated as he landed. In 1969 sports car driver Bevan Gibson in a Lotus 11 got airborne over the hump, the car turned upside down in the air and came down onto the track like that. The hump’s fearsome reputation was well earned.

In 1978, the year that my photos published here were taken, Team Kawasaki rider, Rick Perry had a similar experience at the hump. In a warm-up race on Saturday afternoon, Rick crested the hump and came down hard. In attempting to downshift for Murray’s the gear shift mechanism wouldn’t let him select the lower gears. As soon as the engine began to freewheel, Rick knew that he had no chance of slowing the bike with the gearbox. He gently applied the brakes, knowing that they would never slow him down enough. He stayed on for as long as he dared and, when he knew that that time had come, he jammed on the back brake and laid the bike down. The bike and Rick skidded down the track all the way to the gravel trap at Murrays. amazingly, he got up without having broken a bone. The bike was a mess and Rick’s leathers were shredded beyond recognition. Even more amazingly, the bike was repaired overnight and Rick raced the next day.

My photo depicts Sydney young gun, Ron Boulden on his TZ350. The gallery photos below show other riders, including Hideo Kanaya on the factory Yamaha. However, the reputation of the hump was also one that went down in history for photographers as well. You see, just before the hump, the road dipped dramatically and, as the bikes approached it, they disappeared from sight for a moment. So, if you wanted to photograph them, you basically had to guess when they weree going to reappear over the crest of the rise. Given that they were travelling in excess of 200km/h and more, this was quite an achievement. As you can see from the photo above, the road was also quite wide and the gallery photos show that riders had different ideas about which side of the track to use as they approached the hump. This meant that you might get the bike full in the frame (if you were lucky) but it could still be out of focus as your preset focus lens was aimed at a different part of the road.

My camera was a Pantax SP1000 SLR with a Hanimex 80-200mm zoom lens. The camera had no motor drive for quick film advance, that had to be done by hand. The lens, as noted above, did not auto-focus so you picked a spot on the track, focussed on that spot and snapped the photo when the bike hit it. It was, literally hit and miss as this next photo will illustrate. 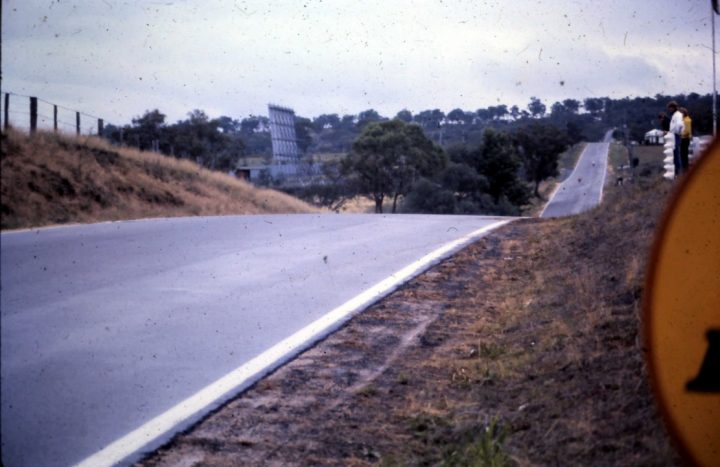 This photo also helps to illustrate the “roller coaster” nature of Conrod Straight. I include a wonderfully evocative photo of the hump at its “best” John Pace on the Moriwaki superbike, straining to keep the front end down. Thanks to John’s brother, David, for this study. 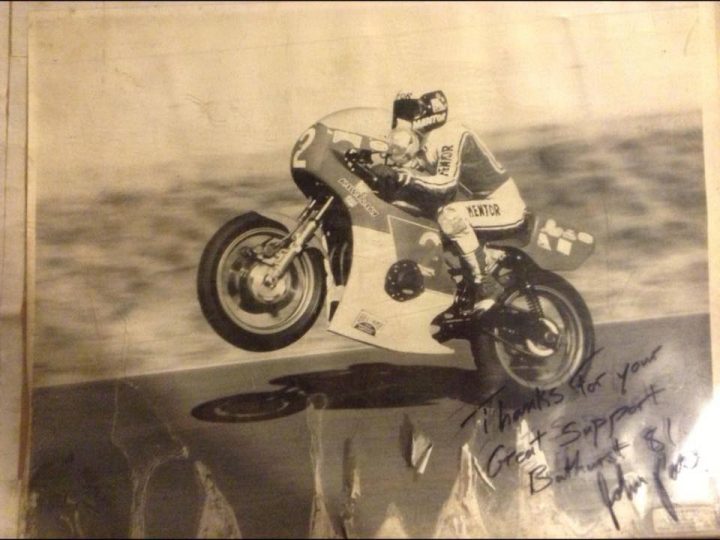 So, it’s not Wednesday but I hope you have enjoyed my version of “Hump Day”