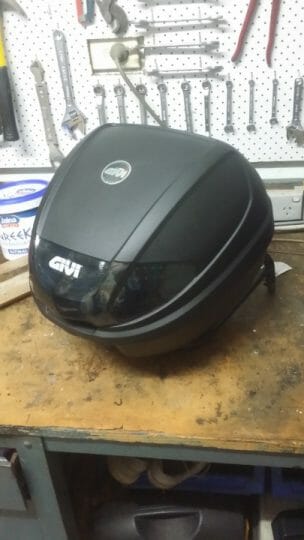 Last week was my birthday and my good wife arranged for me to get a new top box for the bike. Most of you will remember The Great Topbox Disaster of 2018 so it should come as no surprise to know that the offending item has been sent to the naughty corner in the garage never to be seen again. However, it needed to be replaced and I have been searching for a replacement now for some weeks. I have searched online as well as visiting numerous shops and have almost given up the search.

Now I am a devoted online customers but there are several problems associated with being one. Yes, the prices are generally cheaper but the major disadvantage is that one cannot actually determine QUALITY from an online advertisement. That’s where I made the mistake last time. The last box seemed ideal in the ad but it turned out to be very flimsy and have a lock that could not be trusted. So, it has to be a brand name item so that you can actually handle and touch it and determine its suitability.

I had pretty much decided on Givi because I do know the quality (my existing big box is one) and also because the brand has pretty much established itself in the market as the only one available. Even some of the unknown brands that I looked at in shops did not have the quality feel of the Givi and were, in most cases, even more expensive.

So, a quick visit to my local bike shop, Carr Brothers Motorcycles at Albion Park and I found just the size and price that I wanted. Actually, it was anything but quick as I chose to go there at 1600 in the afternoon, right at the peak of the afternoon traffic AND I made a last-minute decision to go there and had to cross the highway to get to the shop. It took me longer to get a break in the traffic to cross and re-cross the road than it did to complete the purchase. The box listed at $141 but when I told Mitch (who I have known for many years through his racing career) that it was my birthday present, he gave me a very good discount as well.

The box comes with the usual Givi quick-detach base plate which I attached to one of my racks as soon as I got home and the whole setup looks very satisfactory indeed (above).

BUT, then I got to thinking about my other Givi box. It is considerably larger and gets used when I do multi-day rides. I bought it several years ago from Metros in Silverwater for the grand price of $30 second hand. The reason for it being so cheap was because it came off a bike that had been involved in an accident and one of the plastic tabs that fit into the base plate had broken off, leaving a hole in the box. They offered me the Givi base plate for another $30 as well but, silly me, I passed on the offer as I knew I wouldn’t be able to attach the box. When I brought it home, I removed the OTHER plastic tab and sealed both holes with fibreglass, spraying the area with matt black to cover my amateurish efforts (this will all make sense when you look at the photo below.)

The big box was then attached to my other rack with screws and metal straps. This works well and is very secure but, when I want to take the box off, say at an overnight stop, I have to remove the rack with the box attached. Last night I dragged the big box down from the wardrobe and began pondering a way that I COULD attach it to my new Givi base plate.

It didn’t take long to figure out that, If I could replicate somehow the now-absent tabs, I could then attach the big box to the Givi plate as well. Here is the result of my efforts. Here’s the box. 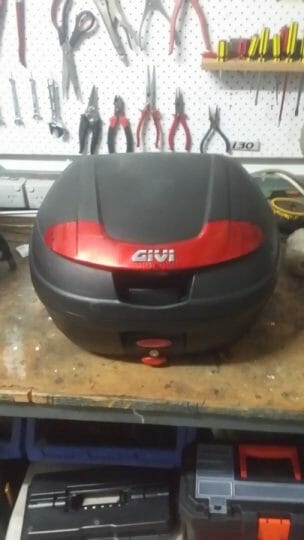 And here’s my new tabs. 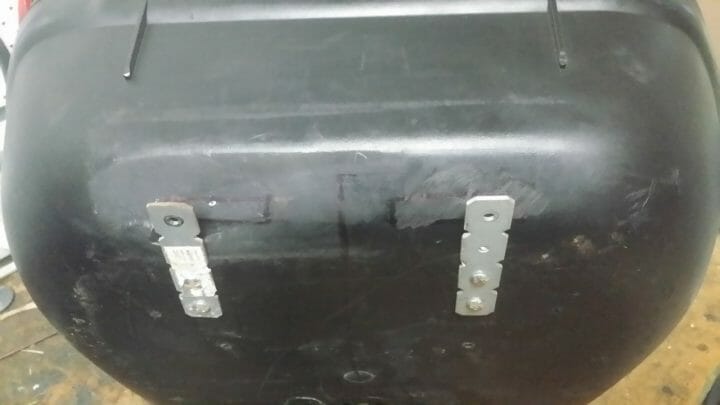 You can see where the old tabs used to be. The metal straps are quite substantial and, despite my initial fears that they may not be strong enough, my experiments so far indicate that they will be more than adequate for the job.

So, I now have a brand new small top box for around town use and it can quickly and efficiently be replaced by the larger box with both of them sharing the same rack and the same base plate.

A very successful birthday and, to quote Hannibal Smith.. 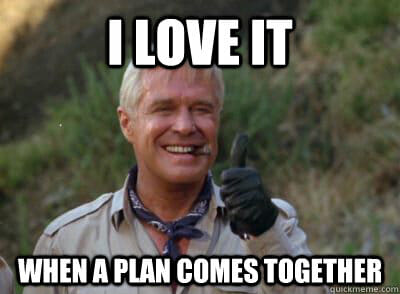