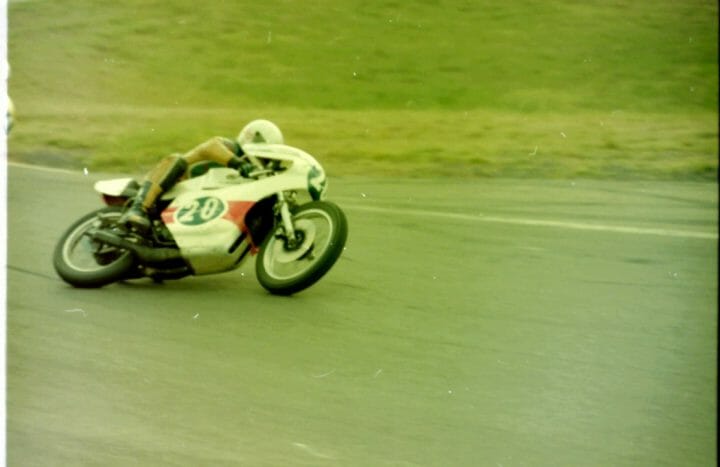 From time to time I go back through my photograph collection and post a few on Facebbok. As you know, I scanned in and catalogued about 3000 photos from my road racing days and put them into albums on my computer and also on my FB site. This is one of them.

It’s Oran Park, and it’s most likely 1977. The rider is Lee Roebuck who was the Yamaha dealer in Goulburn at the time. As Goulburn was close to Canberra and as many of the early CRRC memebrs were Goulburn residents, we had a close affinity with Lee and his business and he also provided some much appreciated sponsorship for our road closure races during that period. Lee was an “A” Grade rider and, owing to his Yamaha connections, always had tip top machinery.

The bike is a TZ350D model (one of the reasons I can be so sure of the date) and I would say that it was very new when this photo was taken as it is still painted in the standard factory colour scheme. The question has been raised as to why the bike only has a single front disk and the answer is that, while both fork legs had lugs for the mounting of the brakes, the bike came from the factory with only one disk. Despite being a very fast bike for its time, it was also exceedingly light and it was deemed that a single disk was more than sufficient to bring it to a halt under racing conditions.

The 250 and the 350 models were identical and could only be distinguished by examining the capacity stamp on the crankcase (one said 248cc and the other 348cc). However, once they were prepped for racing it became much easier as 250’s had green number boards and 350’s had blue ones.

As noted above, Lee was well known to us and, as a photographer, I took lots of photos of him. He was also somewhat of an innovator because it wasn’t long after this that he began to seek performance (and reliability) gains over his competitors by fitting TZ engines into specialist after-market frames. Lee formed an association with the Dutch frame-maker, Nikko Bakker and used their frames for many years, flying the flag for the firm and also finding that he did, in fact, gain performance and handling advantages by using the chrome moly frames from the Netherlands. As an interesting sidebar, current Historic racer, Terry Morris, campaigns a TZ350 in a Nikko Bakker frame which is an ex-Lee Roebuck bike.

To finish up the Lee Roebuck connection, Lee, like many 70’s and 80’s road racers, retired to the Gold Coast in Qld where he mucks around now with boats, not your aluminium fishing boat thingies, though, BIG boats, big, EXPENSIVE boats. I guess not much has changed over the years.

But back to the photo. Many people have asked me if this lurid slide (which I am convinced Lee hasn’t realised is happening yet) ended in a crash and my answer is that I really don’t know. I am guessing that it did because, short of a Marc Marquez miracle, I don’t think I can ever remember a rider getting out of jail from this position back in the day. As I said, the 250 and the 350 looked the same but the 250 was a vastly easier and more forgiving bike to ride as many young hopefuls who upgraded from the 250 to the 350 during their career found out. The 350’s power band was quite vicious and the bike was far more likely to put you in this position than its smaller sibling would.

A couple of other notes. The black stripe behind the rear wheel indicates that this is a rear wheel lockup situation and, given that Lee’s foot dos not appear to be on the rear brake pedal, the odds are that the motor has just seized and locked the back wheel. Even when water cooled, two strokes can still do that to you.

So, did he crash? I don’t know because the most astonishing aspect of this photo is that I don’t even remember taking it. It is one of a series of shots taken from the outside of BP Corner, a favourite spot of mine and would have been taken quite quickly probably during a 6 lap 250 “A” Grade race. Back in the day I would take several hundred photos each meeting and then wait for them to come back from processing a week or so later (film, remember it?) And it was only when I sat down to look at my photos from this meeting that I found this one in the collection. Unlike digital photography where you can check your photo the instant that you take it, slide and print films had to be sent away for processing in a lab and you found out later how you did.

You can imagine my surprise when I opened the envelope and found this one amongst the others.

Best of all, it illustrates that, even though it was over 40 years ago, the fact that your whole world can change in an instant of time has not changed despite the passage of the years.