No, not those sorts of carbs…

I am delighted to receive feedback about my efforts on the net and was especially pleased to receive an email from a gentleman in New Zealand who had contacted MotoPod about my Island Classic interviews. Apparently they are always well received and Andy Course from MotoPod flick-passed one to me in its entirety because it contained some great information as well as some photographs that he felt I might appreciate.

Mark Jackson was responding to my interview with Marty Morrison where we discussed sourcing Suzuki RG500 parts and especially carburettors. For those of you whose memory doesn’t stretch back that far let me explain a little more. In the early days of two stroke motorcycles, the preferred form of induction was by what are called rotary disks. These rotating plates with carefully placed apertures controlled the flow of the air/fuel mixture from the carburettor into the combustion chamber. 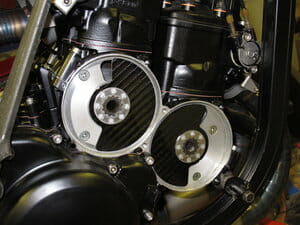 The rotary disk valves in this photo are much newer, as they are made of carbon fibre. Back in the day they were made of metal (very thin metal, actually) and were pretty fragile. As you can also see, they are placed on the side of the engine rather than in the usual place we are used to seeing carburettors. The carbs were mounted onto the valve housings and did the usual job that carbs did. The reason for the peculiar placement is really not that peculiar. In order for the valves to rotate and open and shut the apertures as necessary they needed to do so in time with the rotation of the engine’s crankshaft (obviously). Patently, gearing them to the rotation of the crank was the obvious solution. However, placing the carburettors and their rotary disk valves anywhere else than on the SIDE of the engine was going to call for some very complicated engineering; rotating the drive through 90 degrees at least if the carbs were to be placed behind the cylinders, for example.

So, right up to the end of the rotary valve era, the valves and the carburettors that sat outboard of them, were placed on the side of the engine. You can still see them if you attend an historic bike race meeting because the Cotton and the Armstrong longitudinal 250cc engines persisted with rotary disk valve technology right to the end. Newcastle rider, Stephen Ward, rides a brace of very fast Armstrongs that use (now) carbon fibre disk valves.

So, when Suzuki introduced their square 4 engined RG500 grand prix bike in late 1974 it was no surprise that the motor’s induction was controlled by rotary disk valves. The technology was already proven in Suzuki’s earlier GP bikes and, besides, given the arrangement of the cylinders, it was the only method of induction that could work for that format of engine. Even when Suzuki later changed the RG engine from being a square 4 to a “stepped” 4 as the photos show, the necessity for RVI was still there. Here’s a pic of the RG motor with the carbs in place that will explain. 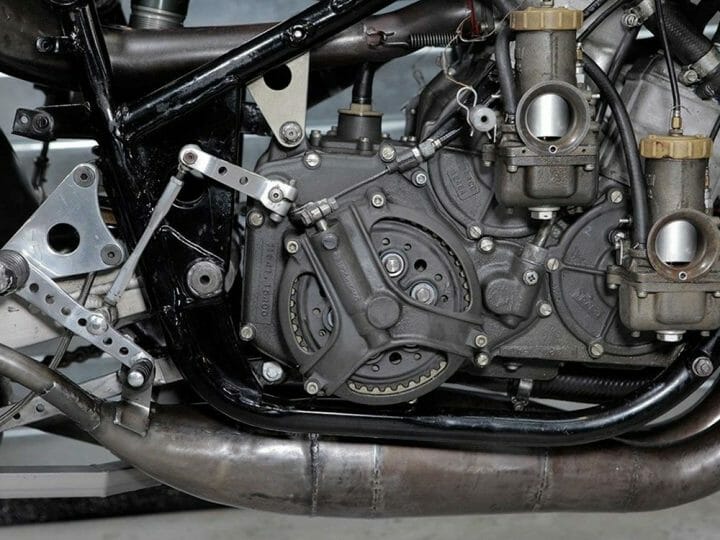 As you can see, the carbs sat on the side of the motor with the rotary disk valve between them and the combustion chamber. This photo is from a quite late model bike, an 1983 model, so the RG had impressive longevity.

Now, what was Yamaha doing while all this was going on? Well, Yamaha had perfected the reed valve method of induction where the carburettors could sit BEHIND the barrels, making for a narrower engine. Reed valves operated by the movement of the mixture and were not mechanically actuated at all.

But I’m sure that, looking at the above photograph, you’ve already started thinking to yourself, “Wow, those carbs are sure exposed, I bet they’d take a hammering in an accident.” Well, yes, they did and it was, to some extent, an Achilles heel of the RG design. Even the simplest of accidents was liable to cause damage to them, if not breaking them off the engine casing altogether, at least damaging them and ingesting rocks and debris in the process. And it was this very feature of the RG engine that Marty Morrison and I discussed in the MotoPod interview.

And it was this fact that brought this wonderful reply by Mark Jackson and the attendant photographs which I will publish below..

“Thanks all for kicking-off 2018 and filling the void between MotoGP season but Special thanks to Phil for another set of brilliant interviews from his Island. Every year Phil’s really mixed bag of interviewees surprise me, from the familiar voices to the newly introduced racers and bike builders it’s a compelling listen.

This year I saved both episodes of PI interviews for a binge listen in the garage and had to grin when Phil discussed RG500 carb damage with Marty Morrison. The carbs are huge and (these days) hideously expensive, made of magnesium and vulnerably mounted on each side of the bike, making damage inevitable. Each mark on them tells a story so (hoping Phil will appreciate the nerdy details as I do) here’s some images of the carbs from the 77 MK2 that fellow antipodean John Woodley raced in Europe in 78 (including the Senior TT).

There are Crash gouges on 3 of them, and the only bellmouth not abraded by tarmac has grooves worn into it by the clutch cable!

My favourite RG bit is related to the 4 carbs; the magnesium 4-way throttle pull. #MotoNerds! 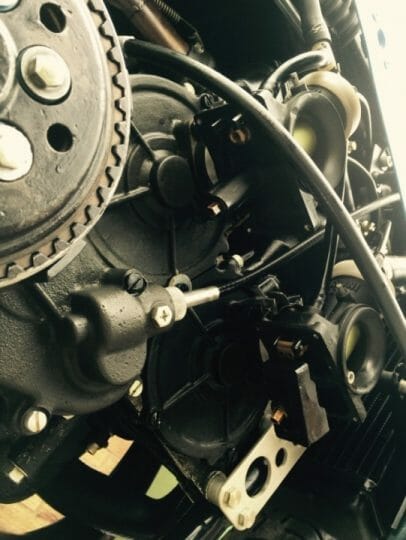 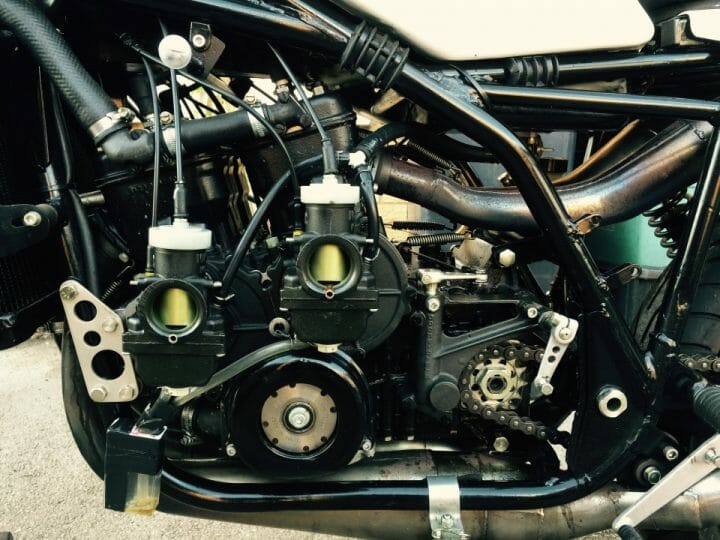 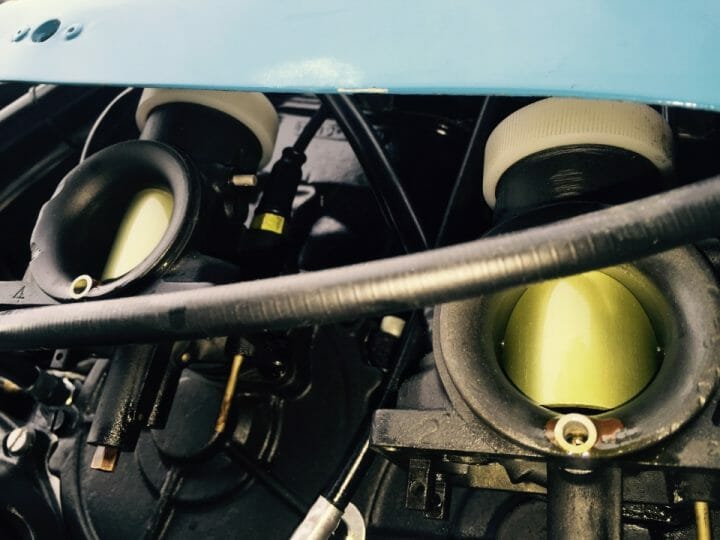 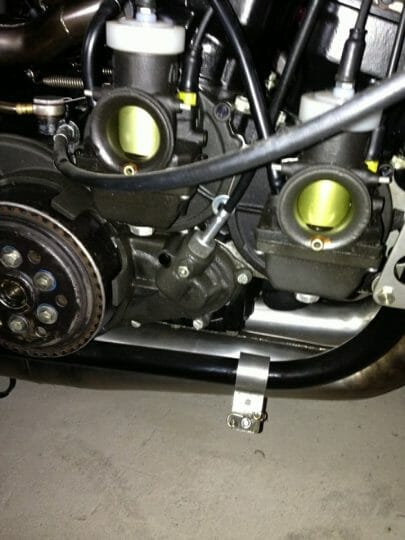