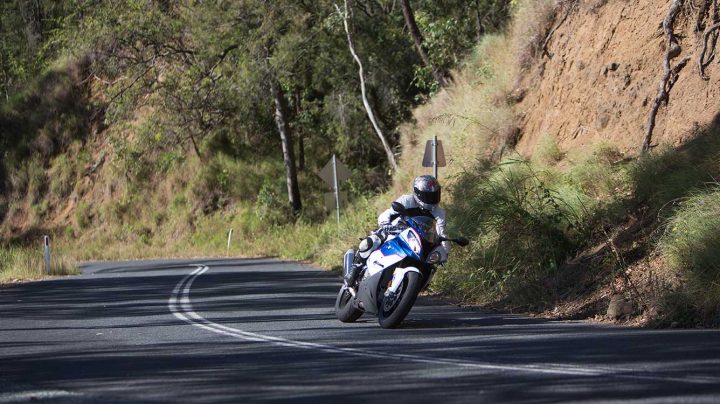 I read with some alarm this week that Nissan do not now market any sedan cars in Australia. The Pulsar, the Micra and the Altima have now all been discontinued, leaving Nissan’s sole fleet range consisting of soft roaders, 4WD’s and utes. Now this, in itself, is not critical to me since I am not, nor ever will be, in the position of purchasing a new car, but the fact, and the likelihood that other manufacturers may soon follow suit IS of great concern to me as a road user and, especially as a motorcyclist.

You see, the road is increasingly being cluttered with large, unwieldy vehicles whose chassis dynamics are poor, whose acceleration is marginal and whose drivers, BECAUSE they are driving these types of vehicles are increasingly uncaring of the other drivers/riders with whom they are sharing the road.

This scenario bears directly on my subject today, that of reading the road. As I rode along last Monday and Tuesday it occurred to me several times that reading the road, being constantly aware of the situation around you, is a dying skill. Let me give you an example.

The F6 Freeway that joins Sydney and Nowra, runs quite close to where I live. As the name implies, it’s a four lane road, 100 km/h speed limit with numerous on and off-ramps to accommodate commuters while allowing through traffic to continue unimpeded. It should be a doddle, right? Except that it’s not. Innumerable times my progress along this road, in either direction, has been interrupted by police and other emergency vehicles attending a road crash. And what is the overwhelming characteristic of these crashes? You guessed it, the classic nose to tail shunt. And why do these crashes occur with alarming regularity? You got it again, inattention, failure to read the road. Of course, playing with the mobile phone or the car stereo or whining kids in the back and dozens of other factors are contributive to this situation but, in the end, it boils down to not enough attention being paid to what the road is telling you.

Of course our police and road safety “experts” will tell you that speed is always a factor. Well, in the sense that these crashes wouldn’t happen if the cars weren’t MOVING, they are right. In that sense, speed is a factor in EVERY crash, but you and I know that this is just nonsense. If speed WAS a factor, how come the majority of these crashes occur at very LOW speed, even though the road itself has a highway speed limit? It happens because the drivers are not paying attention, they are not reading the road.

When I learned to drive, about 100 billion years ago, my instructor was a crusty old bloke called Joe Bennett. He had an old 1960’s VW beetle, you know the one with the “seek and ye shall find” gearbox? If you could drive one of those and pass your test, you could drive anything. But Joe always used to say, “Don’t watch the car in front of you – watch the car that is 4 cars n front of you.” It was sound advice then and it still is. Most of these crashes in traffic occur because the drivers only ever watch the car in front of them (if at all) and, by the time the driver in front has reacted to an emergency situation it is too late for him AND it is too late for the person behind him as well. Joe used to say that I should watch for the brake lights of the cars up the row from me and I’d be ready to react when the domino effect of the cars in front stopping arrived at where I was, and, of course, he was right.

Putting that advice into practice has undoubtedly saved me thousands of times and, even more so, once I started riding a motorcycle. And it’s not just stop lights. A vehicle four or five cars up the row with his indicator on is going to slow up the flow of traffic. And it doesn’t even have to be that. Noting that the vehicles up ahead have started to slow, even, is a warning to get off the power, cover the brake lever and drop back a few more lengths from the vehicle in front of you.

Of course, as a motorcyclist, I have a number of advantages in this situation. Firstly, I sit a little higher than my fellow road-users in cars (unless I am battling the road on a sports bike which means that my visibility is actually worse.) Secondly, I have an escape clause that car drivers do not have, being able to slip left and avoid the car in front if he does stop unexpectedly. Riders should always be prepared for that to avoid becoming the meat in the sandwich of some dozy drivers.

Reading the road in traffic is a constant juggling act of watching what the other road users around you are doing. But, in reference to my opening paragraph, this is becoming increasingly difficult as 4WD’s and softroaders obscure the visibility that you WOULD have if the drivers had been driving cars instead. It’s pretty easy to see over the top of a car, it’s impossible to see over, or even AROUND a Land Cruiser. So, give yourself more room and adjust your expectations.  This skill is one that is going to become increasingly critical as our roads become more clogged with pretend Russel Coights.

Increasingly we are sharing the road with white courier vans. The same difficulties apply and don’t even get me STARTED on trucks, concrete agitators and semis. However, courier vans can sometimes be used to your advantage as I have found. Almost without exception, drivers of courier vans know the road you are sharing with them better than anyone. They follow a well-known route in their delivery rounds and know the traffic situations intimately both on the main roads and in the backroads as well. Watching their lane placement, their anticipation of traffic lights and the speed at which they travel in a given situation can give you some good clues as to how you can better navigate the urban jungle. I have also found that courier divers tend to be a bit more tolerant of filtering than many motorists are and a quick wave and a thanks when they have eased your progress a bit is always a good thing.

Reading the road in the country is just as important, perhaps even more so since the speeds at which you are travelling will usually be higher and the time for a situation to go from being normal to abnormal can be dramatically shorter. So, how do you read the road in the country? Well, pretty much the same way with a few additions and caveats. Watch what the other vehicles around you are doing and adjust accordingly. A truck in the distance will probably be travelling slower than you are so be aware of your closing speed. A gaggle of cars can also be cause for caution as the drivers will be totally focussed on the other cars in their group and not on the sudden arrival from behind  of a motorcycle.

Farm vehicles are often allowed to drive on the road for short distances. These are generally big, unwieldy, slow and noisy and the driver will probably not hear that you are there until you are right on him. Thankfully, farmers tend to be very polite and will move over as soon as they can BUT, be aware that farm vehicle has COME from a farm and is RETURNING to one and will, most likely, turn into an as yet unseen farm gate at any time, often without any indication. Give them the benefit of the doubt and be safe. What’s a few seconds lost off your journey time anyway?

And, speaking of farms, farmers will often move stock from paddock to paddock, either along the road side or across the road from one side to the other. The drovers will try to ease your path but stock can be flighty so be aware. Where stock has crossed the road there will inevitably be excrement on the road and it’s going to be slippery, especially if it has rained. Read the road and take care.

A puff of dust in the distance will be an indication that someone is driving on the unsealed verge of the road. You don’t need to know why, but you do need to know where and be ready to take avoiding action if necessary.

On country roads truck drivers will often try to help you out by indicating to you when it’s safe to go around. This can be a two-edged sword. What the driver thinks is safe may NOT be safe for you. Don’t assume that he is always going to be right. It’s better to hang back and make your OWN way around when you’re ready than take his word for it.. Lately I have had several drivers wave me around when the road has a double unbroken lines. Just because he would do so doesn’t mean you should. The HWP man isn’t going to let you use the excuse that the truck driver said it was OK if he sees you overtaking over the double yellows. Read the road a YOU decide when it’s right.

All of these advisories go double when the road is wet or the weather conditions are poor. Do you usually ride right down the middle of the lane? I know, I do. When it’s wet that will be the part of the road that has a dose of diesel on it which comes to the surface when it rains. Ride slightly to the left had side of centre in these situations.

I could multiply examples but I know you’re with me. It’s not rocket science, but then again, there aren’t many rocket scientists out there, are there? Read the road, ALL THE TIME. You’ll stay safe, have a lot more fun and arrive home in one piece.