You are here: Home / June 2017 / Photographs and memories

Apropos my article today I thought that this wonderful Jim Croce song was highly appropriate. Today I’d like to share some photographs and some memories.

You see, in amongst the rush and bustle that seems to be my supposedly relaxed retired life style *rolls eyes* an important anniversary slipped by that transpires had more significance than what I have previously given it. Last Friday, the 9th of June, was the 36th anniversary of the death of Kenny Blake at the Isle of Man races. I observe it every year and mark it with a mention in my blog along with a regret that, once again, I have been unable to attend the Melbourne memorial dinner for Kenny. The passage of time does not diminish the regard in which Kenny is held by the racing community, especially here in his native Australia and it is entirely appropriate that the date is still held to be important by those of us who hold his memory dear.

The photo at the head of the article is one that was sent to me as a 5×7 B&W print by a friend who lives in Narandera, NSW. Uncredited as it is, it is a shame that I cannot acknowledge the excellent photographic skill exhibited here. It shows Kenny at work during the 1973 Castrol Six Hour race at Amaroo Park in 1973. Kenny won the race that year, riding the whole six hours by himself, wrestling that big Kawasaki “Zed” around the tight 1.9km layout and negotiating a field of over 50 riders, many of whom were riding much slower bikes than his. The feat of concentration is astonishing given the dramatic difference there must have been in lap times and closing speed as he moved up on them to lap them yet again. Yet here he is in the loop around the back of the track, footpeg and boot dragging on the deck, hanging off the bike t try and keep the undercarriage from being ground away. It was my privilege to watch Kenny race many times back in the day and I can personally attest to the metronomic ease with which he clicked off laps, regardless of traffic or other track conditions.

But it wasn’t until this year that it was drawn to my attention that the date of Kenny’s death, the 9th of June, was also the date when we lost another of our racing sons, ironically at the same venue. Les Kenny was killed on the 9th of June 1976 while competing at the Isle of Man, crashing just a few kilometres from the start of the race. I do not remember Les. I started going to the races in the February of the year he died but had not begun to become a student of the sport when he was taken in the June. Nevertheless, his memory is also held close by those who knew him and who saw him race. While he may not be as famous or revered as Blake, yet his name lives on in memory as one of the many gladiators who paid the ultimate price for their obsession. And it is for that cause that we pause and remember them when these sad anniversaries come around. How tragic it is for us to have lost TWO of our young men and that on the same date. 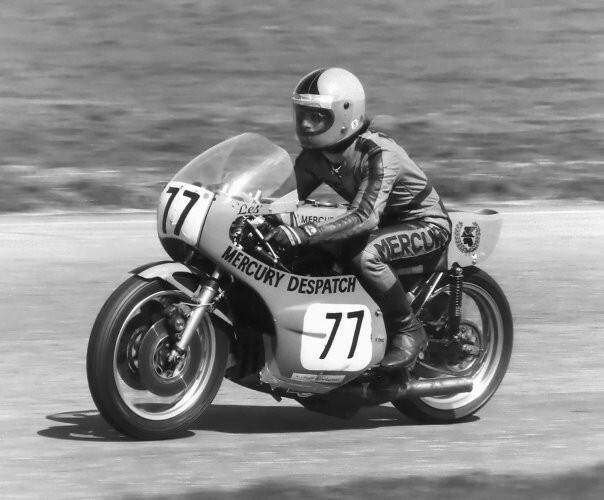 It is these photographs and memories that lead me to record an insight that is not going to be popular with many of my readers. I hate the Isle of Man races. I have no idea what has happened there in the last two weeks except to record that three racers died there and that other riders suffered horrific injuries in high speed accidents that could easily have led to their deaths as well. I don’t know what races were run, who won them and what the placings were. I simply don’t care. As much as the apologists for the yearly carnage may choose to justify it, I find the almost casual acceptance of inevitable death and sadness as “part of the sport” as obscene as I find the buffoon who is the Mayor of London opining that “terrorism is part and parcel of living in a big city”. Both sentiments offend me to the core and neither of them are acceptable.

On a brighter note, the Catalan GP last night showcased why MotoGp is the best motorsport spectacle in the world, bar none. The minor classes were suitably entertaining, especially the Moto3 race, but the big one was a cracker. With just two races to go before the mid-summer break, Yamaha is struggling on the low-grip circuits and the runaway points leader from the start of the season now has a pack of frantic pretenders breathing down his neck ready to administer the last rites to his title pretensions. My two personal favourite riders, Marquez and Zarco, covered themselves with glory yet again, both bouncing back from a horror run in practice and qualifying to sparkle on race day. I would like to be a fly on the wall in the “works” Yamaha pit this morning after having both of their riders again being beaten by the two satellite team riders 🙂

On the 1st and 2nd of July I have committed to attending and commentating at the 3rd round of MotoStars at Toowoomba in Queensland. What started out as another Minibago jaunt has morphed into a potential multi-day motorcycle tour of SE Qld and northern NSW! It is over 7 years since I did my “Six Days on the Road” tour of the same area and it occurred to me as I was thinking about the weekend that it was time I did something similar. Early stages of planning as yet but I’ actually getting rather excited about the prospect. More details as they come to hand.

Tomorrow I have another nursing home concert at Unanderra and, in other exciting news, it may be that our group, “Three Sixty” will be performing at the National Folk Festival in Canberra in March next year. This is also in the very early stages of planning but I must admit that it would be somewhat of a feather in our collective caps if were were to be accepted as participants.

Better leave it at that, catch you again soon.