Those of you who know me will already know that I am not the most (or even the least) artistic person. However, I was reminded the other day of a story from my youth that has (believe it or not) a motorcycling connection. Isadora Duncan (pictured above from a series of studies taken in 1915) was an American dancer who revolutionised dance in her era by breaking away from the strictures of classical ballet and the way it was taught and performed and adopting a bohemian and very free-flowing interpretation of the art form. I can recall being told about her when I was a child, my (very) conventional parents recounting some of the more lurid aspects of her life and especially her death. Whether this was intended to be some sort of cautionary tale I have no idea but the particularly graphic descriptions of her final moments have certainly stuck with me ever since.

Duncan’s interpretations of dance harked back to classical Greece and she embodied that in her performances and also her costume. Instead of the strait-laced costume of ballet at the time, she favoured long, flowing costumes that allowed freedom of movement. This was unwittingly to contribute to her demise for, on the 14th of September 1927, she was the passenger in an Amilcar, a French car of the time. She was wearing, as part of her ensemble, a long silk scarf, hand painted by a Russian artist. Despite entreaties by friends to wear a cape as protection from the cold, she, instead, let the scarf blow behind her in the wind as the car pulled away.

Unfortunately, the scarf became entangled in the wire rear wheel of the car, and, as it accelerated away, it tightened, dragging her from the car and along the road for some distance. Duncan died as a result of being flung onto the road and so, like many who pursue public fame, she became more famous in death than she ever had been in life.

So, why this obscure and esoteric thought and what connection does it have with motorcycling? Well, the other day when I was at the MotoStars race day at my local go-kart track, I noticed several signs warning kart hirers of the danger of loose clothing while driving the go-karts and advising that any loose clothing should be tucked in and secured for what are now obvious reasons. And it reminded me of what could have been a potentially fatal incident in my own motorcycling experience. 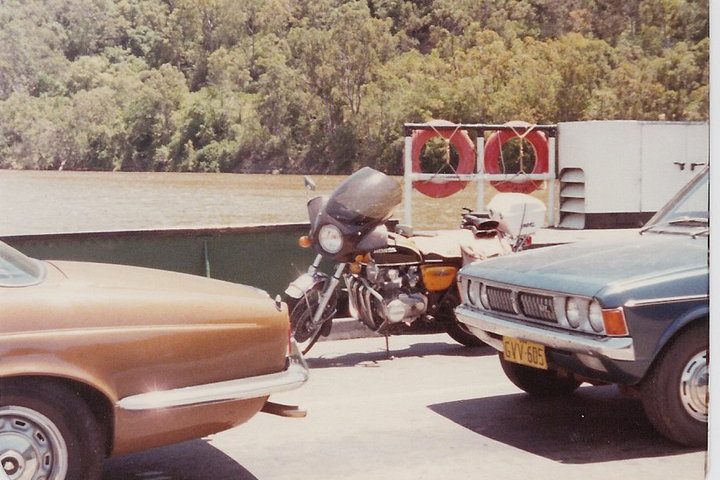 It needs to be understood that pretty much the best that was available in protective and weather-proof gear at the time was the venerable Belstaff jacket and pants (and they weren’t cheap, either). Made of heavy grade cotton, they achieved their (dubious) reputation for protecting you from the elements by being waxed, the heavy duty material being coated with a waxy substance that worked its way into the weave of the material and sealed it up, preventing (or so they said) the wind from passing through the material and rain from doing the same. The jacket and pants were lined with another layer of heavy duty cotton and they were supposed to be protective in an accident and warm and snug in the cold.

I never tested their crash protection though I knew people who did and they actually stood up pretty well in that scenario. Of course there was no built-in armour in the appropriate places. As far as rain protection was concerned, they were pretty much a failure. Unless you regularly re-applied the wax, a smelly and dirty procedure, the jacket only protected you from the lightest showers and its multitude of double-sewn seams allowed water to easily pass through and gradually saturate whatever you were wearing underneath them. Thank God for the invention of cordura is all that I can say. The same downfalls that Belstaff gear had as far as preventing the ingress of rain also militated against them when it came to keeping you warm.

Those in the know always bought jacket and pants that were several sizes larger than they needed to be, knowing that it was the LAYERS of clothing that you wore UNDER the Belstaffs that really provided the warmth that you needed. Oh, did I mention that Belstaffs, especially if you waxed them regularly, smelt like a dead polecat and made the wearers of them social pariahs wherever and whenever they appeared? No? Well, they did. 🙂

Now I was living in Canberra at the time and the nighttime temperatures in Winter could often drop as low as -10 and regularly below zero degrees Celsius so finding gear that would keep you warm while riding in the Winter was always a lottery. Nowhere was this more apparent when it came to keeping one’s neck warm. These days we have silk and material balaclavas but back then it was a scarf or suffer. I’m sure by now you can see where this is heading.

I was on my way home from a race meeting at Oran Park. The sun had already set before I set out on the 3 hour journey home down the Old Hume Highway and it had already started to get cold. I had several layers of sweatshirts on under my jacket and a set of thermal underwear, vest and pants, on as well. And attempting to keep my neck warm I had a thick scarf, lovingly hand-knitted by my wife. It was mustard yellow in colour and plenty long enough to wrap several times around my neck to provide maximum protection. And it was this article of clothing that damn near brought me unstuck.

It gets very cold on the southern highlands at night and I’m guessing that it was already close to zero when I started heading down the long hill that led to the bridge crossing Uringalla Creek. Here it was that, some years later, the infamous headless corpse was found, sparking a murder investigation that is still ongoing, but that is not part of my narrative. As I crested the rise and started down the hill, it took a few moments for me to realise that, far from accelerating, the bike seemed to be going slower. I closed the throttle and pulled in the clutch as I pulled to the side of the road. Even with the drive disengaged, the bike continued to slow and, just as I pulled to a stop I felt the first pressure on my neck. In an instant, memories of the story told those many years ago about Isadora Duncan flashed into my mind and I knew exactly what had happened.

My suspicions were confirmed as soon as I put the sidestand down and got off the bike and I fell over onto the hard shoulder, the scarf keeping me firmly attached to the bike. I regained my feet and took the scarf (or what remained of it) off and started to make some sense of the situation. Of course the fact that it was as black as Egypt’s night and I was in the middle of nowhere didn’t help, but, by switching the ignition back on and the headlight, I had enough light to see that the scarf was firmly wrapped many times around the rear sprocket. As a teacher I had always made a practice of carrying a small pocket knife in my pocket to sharpen pencils and whatever so it came in handy as I laboriously hacked the mangled scarf out of the sprocket and chain and tried to get going again. It took some time but finally I was able to return the driveline to the state that would enable me to ride again. The remains of the scarf that were salvageable were covered with chain lube and were also thrown away when I got home but I put the rest of the scarf in the top box, checked to see if there were any other “nasties” evident and hopped on and resumed my journey.

Only after I had gotten going again did it really hit me how close I had come to real tragedy. I had been travelling at 100 km/h. Even if the scarf hadn’t strangled me, worst case scenario, it at least could have caused me to crash on a busy road, in the dark with semi trailers and other motorists rushing by.

Concentration on getting home probably stopped me from dwelling too much on possible scenarios but, I have to say that, every time I drive or ride down that hill, I pause to remember my very close call that night. It could so easily have been a story that I might not ever have been able to tell.

So, ballet to motorcycling, who’d have thunk it?

Oh, and happy Mayday to all my Finnish relatives!