Were you to pass by Ralph Hudson in the street and were you to stop and notice him, he would appear as a most unremarkable person. Slight of build, white wavy hair and usually topped with a baseball cap, something which I happen to think looks foolish on older men but, on Ralph it looks totally appropriate. Were you to look more closely you would notice an alert and inquisitive expression and a face filled with lines that speak of a lifetime of smiling. Engage him in conversation and you would further notice expressive hands that are forever moving, adding to the narrative of the moment. His voice is quiet and peaceful and his speech is self-deprecating but it also gives the sense that the man is forever on the lookout for something. Constant improvement seems to be the theme and it becomes clear that these still waters run far deeper than it first appeared.

It seems at first astonishing that this man is one who has devoted his life to the pursuit, to an almost obsessive level, of speed. For Ralph Hudson IS a speed freak. The long black line that leads to a possible oblivion across that horizon somewhere is his favourite sight. Going faster and faster is his goal and, believe me, he is achieving just that. This unassuming American, 65 years young, from Glendale in California is a record-holder and he continues to push the boundaries in pursuit of more and more records.

When you think of speed records the mind automatically focuses on the Bonneville Salt Flats, just outside of Wendover, Nevada. The “Mecca” of Land Speed Racing for many years, it was at Bonneville that the spectacular flurry of record breaking in the 60’s through to the 80’s took place. It was here that, in those few years, the car Land Speed Record was raised from just over 400mph to over 600mph (please note that, when referring to records, the old Imperial measurements are still used)

It was at Bonneville that the famous Harley Davidson attempt at the motorcycle land speed record took place. You know the one that is featured in Bruce Brown’s “On Any Sunday”? (and he just kept on saying, “You guys are crazy”). It was here that Burt Munro broke his one and only record in the world’s fastest Indian and it was here that motorcycle racing legend, Don Vesco, put his name in the record books from 1970 to 2001 when he progressively raised the LSR for bikes from 251.66mph to 458.440mph.

Ralph has raced at Bonneville many times but the salt flats are languishing. Salt extraction and commercial mining around its periphery have severely degraded the surface and reduced both the length and the quality of the salt needed on which to run at record pace. Added to this, inclement weather has killed off any record attempts in 2014 and 2015 and severely limited salt time in 2016. So the speed nuts have long ago looked for an alternative.

The alternative is the El Mirage dry lake in the middle of the Mojave Desert in northern California. The surface is smooth (much smoother than Bonneville), the weather is more predictable and the lake provides plenty of distance on which long runs can be made (around 1.3 miles, shorter than Bonneville but long enough). The track IS dusty and it is harder to achieve good traction than on the salt, but the venue is far more reliable so Ralph has been spending some time there as well. On the 13th November 2016, Ralph, riding his home-built-self-designed streamlined bike, set a new record for his class of 266.399 mph (that’s 428.614km/h), To put that in perspective, the top trap speeds at Phillip Island historic meeting last weekend were around 260km/h and even the MotoGp bikes top out at around 330km/h.  This speed makes Ralph the fastest motorcycle racer to ever ride at El Mirage.

Now you all know my passionate interest in anything LSR-related so, when I found out a couple of years ago that Ralph was going to be part of Team USA at the Island Classic, I made it my business to meet him and interview him. Sadly, Ralph’s first visit “down under” was not a success. His own bike was troublesome, and, riding a borrowed bike, he crashed and broke his collarbone and so was hors de combat for the meeting. Nevertheless he did provide me with an insight into his fascinating other life going in a straight line. You see, Ralph also races historic racing and is very successful in that arena as well.

Last year Ralph returned with a “proper” race bike, CMR frame, Yamaha FJ1200 engine, the works. And he provided valuable support to the team though he himself was critical of his lack of pace. This year he returned with the XR69 replica but was again disappointed with how “slow” he was. Fortunately this year he also brought his old TD2 Yamaha and he had a great weekend with that, picking up 4 2nd placings behind the flying Murray Seabrook. But his lack of “match practice” on the big bike was a huge frustration to him.

So, what makes this intensely private and modest man sit himself into a turbocharged GSX-R1000-engined bike and go faster than any of his peers at Phillip Island last weekend have gone? Unsurprisingly, Ralph is unwilling to talk too much about himself but will tell you anything that you need to know about his BIKE and about racing it.

The rules for the class in which Ralph has chosen to run (there are dozens of classes for bikes from 50cc and upwards) state that the bike may be streamlined but that the whole of the rider (except his hands) must be visible when the bike is viewed from above. This precludes full streamlining which would push it into the “sit IN” category. So, who designed this super fast bike? Ralph did. For over 20 years he has been drawing and formulating what was needed. To start with he built a bike with a big fairing on the front, reasoning that you needed to push the wind out of the way. Perplexingly the bike turned out to be faster WITHOUT the fairing, what was wrong here? Then he started looking at other LSR bikes and he started, as he rightfully should have, with the NSU speed record bikes. In the 1950’s the German factory achieved ridiculous speeds with tiny bikes with even tinier engines. How did they do it? Streamlining.

Looking at the pictures it became clear to Ralph that it wasn’t what was IN FRONT OF the rider that was as important as what was BEHIND him. The laws of aerodynamics do not change with the whims of fashion. What was right then will still be right. So he set about designing a bike that was properly streamlined. Remembering that the body had to be visible, he sketched out dozens of designs, often on paper napkins in cafes, all concentrating on achieving maximum airflow and minimum disruption. Using books and, later, the internet, Ralph devoted himself to the study of aerodynamics and came up with the design you see above. He then took it to the salt to see if it worked. I asked him why he didn’t test it in a wind tunnel first. His eyes twinkled as he told me that he couldn’t afford to hire one.

Time and some tweaks to the final design were to prove that he was spot on. The bike was fast and stable. Using a normally-aspirated Gixxer engine he pushed the record well past the 200mph mark and he believed that there was much more to be had. But he HAD achieved the first of his goals; he had joined the 200mph Club. Membership of the club is exclusive because not only must you exceed 200mph (average of a two-way run) but you must also break a record in doing so. “And do you know what you get if you DO break a 200mph record?” he asked. I guessed a medallion, a plaque, a trophy. “Nope,” he replied, his voice full of humour, “You get a red hat,” and he pointed to the one on his head. Yep, that’s it. For all that time and money and effort, that is the prize (Ralph is wearing his red hat in the picture at the top of this article) 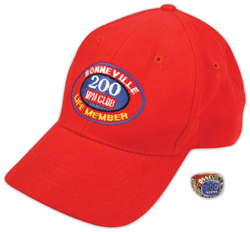 So last year Ralph added the turbo in search of more speed. It is counter intuitive but more BHP does not necessarily translate to more speed as the more power you have, the more problems you have getting it to the ground. “There are 450bhp Hyabusas in my class,” he said, “But my bike is still faster and it’s only pulling around 275bhp.”

Just before he left California to come out to the Island Classic he received a letter to inform him that he had been inducted into the Dry Lake Racers Hall of Fame. “I was shocked,” he said, “Because I didn’t even know such a thing existed.” Looking up the Hall of Fame he was even more shocked as the list of inductees reads like a Who’s Who of land speed record racing. Breedlove, Vesco, Arfons and so on and so on are all members. “I was wondering what I was doing in the company of those guys,” he went on, “But then I noticed that there were a lot of names there that I didn’t recognise either so I didn’t feel so bad.” The landmark Hudson self-deprecation yet again.

The perspective is that, of the hundreds of people who attempt motorcycle records at El Mirage, Ralph Hudson is the fastest of them all. Nobody has ever gone faster on a motorcycle. I am certain that, in his chosen class he will also be at the top of the list if the Speed Weeks at Bonneville are run in August this year.

Here’s some videos that might help to shed some more light. 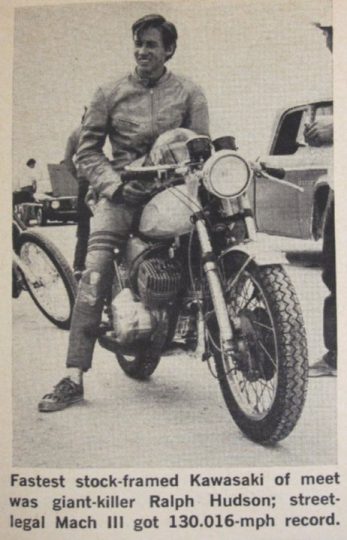 As you can probably guess, I am a Ralph Hudson fan. Words do not convey adequately what an engaging and amazing character he really is. I am proud to call him my friend.