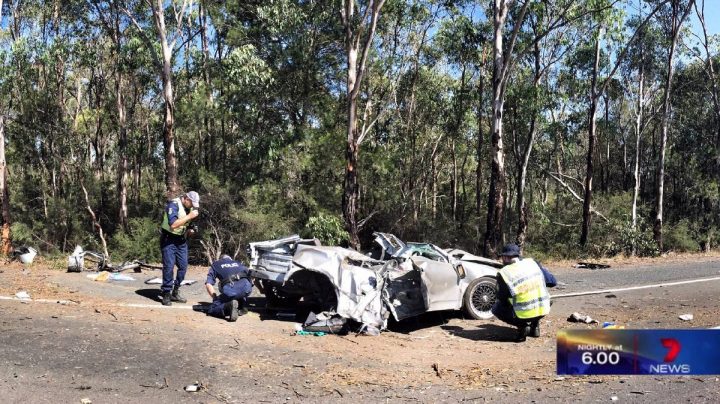 This used to be a Toyota Celica. On Monday morning, out of the Hume Highway west of here, the car, carrying three passengers allegedly collided with a kangaroo while travelling “at high speed”, One of the passengers was “ejected from the car” and all four occupants were taken to Liverpool Hospital with multiple injuries (though how any survived is amazing). Later investigations revealed that the car was probably travelling in excess of 150km/h, 40 km/h above the posted speed limit for that stretch of road, and that the vehicle had “left Victoria” earlier that morning.

Some time ago I penned an article under the same title as this one where I detailed some bone-headed things that have happened along the Putty Road and I used the term that was coined by Kim who owns the Grey Gum Cafe. To use her terminology, some of the stupid things that she has seen done “does her head in” and the incident this week is surely an example of the same thing. While death did not result from this crash, the use of it as an example of stupidity on the highway is valid.

The point at which this crash occurred is c 400km north of the NSW/Vic border so, assuming the driver left Victoria earlier that morning, as claimed, then he would have been driving for close to 4 hours by the time this crash occurred. The road is 110km/h from the border but, given that the car was exceeding the limit by a considerable amount when the crash occurred, its is reasonable to assume that the driver had been driving at that speed for a fair amount of that time. Factor in the fact that it is Double Demerits week here in NSW and that the police are out in force looking for bad driving, the fact that he survived for as long as he did is amazing. But it looks like he had managed to avoid an accident and detection until the fatal moment that the marsupial wandered into his path.

I have wondered out loud for many, many years what sort of stupidity is at work in drivers who spend 50 weeks of the year driving 30kms to work through peak hour traffic at 15km/h but who, for one week of the year, fancy themselves to be the world’s greatest long distance driver. Do they not understand that there is an ETERNITY of difference between their daily commute and travelling at 110km/h for 900kms on the Hume to get from Melbourne to Sydney? Evidently they do not as holiday season stories like this are far from rare. No doubt this one will be documented as “speed was a factor in the crash” (I’ll get back to that dumb label in a moment). No doubt it will also be noted that fatigue was also a factor as I am sure that it was. Unfortunately, stupidity cannot be listed as a factor on official documents as I am sure that it is applicable here (the passenger who was “ejected from the vehicle” was obviously not wearing their seat belt and that DEFINES stupidity.) It will be interesting to discover what the police report DOES say because I am sure that it will be very revealing.

Now, as for the speed thing. It’s the catch-all for every crash and it’s right, in a way. After all, speed is the factor in the vast number of crashes, no matter how fast it is. The fact is that, if the vehicle ISN’T moving then it is unlikely to crash. So, in that sense, if you don’t “speed” then you’re not going to crash. Of course the police’s fixation with speed has very little to do with safety and very much to do with raising revenue, the most important activity of any government instrumentality. Speeding is easy to detect, easy to fine and an easy source of money, so it’s no wonder that it is their obsession. In this particular instance, however, if the driver WAS exceeding the limit by 40, then  speed, along with fatigue, can certainly be listed as a factor.

The loss of ANY life is tragic, but the loss of a child’s life seems to be even worse. How can you go shopping, come home and “forget” that your little 3 year old has been left in the car? Surely we have seen enough drownings in backyard pools to reinforce the need for 100% monitoring of little children when they are near pools? I could enumerate example after example, but the point is made.

NOW, please do not accuse me of being insensitive. My father died when I was 20, only four days before Christmas, so I know how it hurts, believe me, I do. But how do we drive home the point to the populace that even just the tiniest amount of THOUGHT can probably eliminate the vast majority of these tragedies? I have no answer to this question; I wish I did. Until we figure this out, people are going to continue to inflict tragedy upon themselves and their families for no good reason. Death by stupidity; sad to say, it’s out there and it seems to be worse during the holiday season. Stay safe, peoples, please.