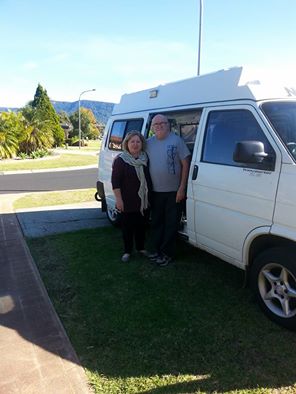 So, it’s now Friday and we are in the Hunter Valley. We set out on our big adventure on Tuesday morning so we haven’t really got very far as I will explain.

Since we have been planning this long trip for some time one of the things about which I have been most particular was to ensure that the Minibago was mechanically sound and able to do the trip. With 240000kms on the clock, I have always been conscious that the chances are that work would need to be done if we were to be confident setting out on the trip. With that in mind I booked the van into a VW specialist in Sydney and asked him to fix a few things that I knew needed doing and also give it a thorough check-over for safety and reliablility.

It cost a fair bit to get all the little things done but we were happy that the gearbox subframe was replaced, the 4 rubbers that secure the steering rack had been replaced and numerous other little bits and pieces had been taken care of.

I wasn’t so pleased when I found that the steering wheel, which I had asked be adjusted so that it was on the correct spline on the steering column, was binding on the plastic shroud behind it. Never mind, no biggie. I returned to Sydney (around 100km round trip) and, after some flaffing around, the steering was smooth and the wheel pointed straight. That, along with a clean bill of health from the mechanic, meant that we could set out with confidence.

The confidence evaporated very quickly. Driving through Wallacia, around 70kms into the trip, I noticed that the steering wheel was loose. The nut that holds it onto the column was obviously not tight. Problem was, I couldn’t undo the wheel and tighten the nut because the wheel boss and air bag mechanism is secured by Torx screws. So, we babied the van into Penrith where I stopped at the Repco store and bought a cheap set of Torx screwdrivers. It didn’t help. The screws had obviously been done up with a socket and they wouldn’t budge. Enquiries with the Repco man revealed that a Repco-approved mechanic had his premises in the back street.

Once the airbag cover had been removed it was clear just how loose the steering wheel really was. Further examination revealed just how dodgy the job done by the so-called VW “expert” had been. It transpired that his mechanic had hit the steering nut with a hammer to release the wheel from the taper on the steering column. When he reassembled the components he failed to slide-hammer the steering column back to its proper length and so, when the wheel was replaced, it couldn’t bind back onto the taper. That was what caused the binding on the shroud that caused me to have to return the van for more work.

The “fix” that they applied was as dodgy as it was dangerous. A plastic washer had been placed on the column and had been liberally lubricated then the wheel was put back on. This meant that the wheel cleared the shroud and turned nicely. It didn’t, however, allow the wheel to be snugged up onto the taper and so be secure; thus it had started to come loose as soon as we started driving.

No worries, the guys at the Repco shop fixed it, took it for a test drive and returned, taking the van into the workshop and puttting it onto the hoist. Half an hour later, the mechanic emerged with a sombre expression and asked me if I’d like to know what they had found that was wrong. I didn’t really, but I had no choice. The four rack and pinion bushes in the steering had not been replaced with new ones – oh, well ONE of them had, that was the easy one to get to. As a result, the rack and pinion mechanism was moving from side to side at full lock and compromising the wheel alignment. There was a major water leak at the back of the engine and a major oil leak from the oil cooler. The gearbox mount had certainly been replaced but both of the engine mountings were “sagged” to their maximum limit. The left outer CV boot was split and needed to be replaced and that was just the things that they had found from a cursory inspection.

Shattered doesn’t really cover it adequately. Despite all of this, our council-of-war resulted in the decision to push on to the Hunter Valley where we had been planning to stay for the first night and to let my good mate who IS a mechanic and whose word I CAN trust have a look and see what the state of play really was. The night run up the Putty proved that my job of adjusting the headlights against my garage door had been surprisingly successful and that my $50 driving lights were AWESOME!

Lenny was very skeptical about the Repco man’s diagnosis and said he’d look at the thing in the morning, which he did. The result? The steering rack had NO movement in it at all at either extremities of the lock and was solid as it is supposed to be. The engine mountings were fine, there WAS a split in the left outer CV boot, There was NO oil leak from the oil cooler and a MINOR water leak from the bottom of the radiator catch tank which was fixed by cutting out the split end and re-atttaching to the catch tank. The water that HAD been leaking from the catch tank, however, had been dropping directly onto the plug leads and the distributor, so stopping the leak and drying out the leads and the distributor eliminated the occasional “miss” that I have been noticing in the engine ever since I bought the van. The plug leads were very second-hand and needed replacing, something else that the mechanic in Sydney should have picked up.

A couple of days waiting for the necessary parts to arrive and it was booked in this morning at the shop of a mechanic (who Lenny DOES trust) in Kurri Kurri  and we should be on our way later this afternoon.

So, how do you tell if a mechanic is lying? When his lips are moving.