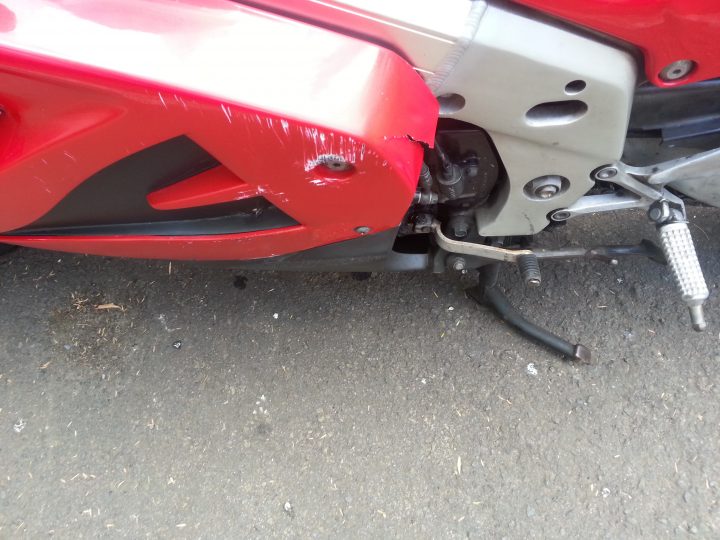 Sod’s Law is similar to Murphy’s Law (“Anything that can go wrong, will go wrong”) except that it is broader in meaning. Yesterday I experienced it.

Despite (or, is it because of) being retired, I seem to be having problems managing my spare time. So, when Nowra Speedway’s meeting on Saturday night was unexpectedly cancelled last night, an opportunity arose to go for a ride on the weekend. Having recently discovered the Lakes Way north of Buladelah, we headed off early Saturday with the intention of exploring its delights. With me so far? Good.

First stop was Maccas at Heathcote. Right at the lights, left into the driveway straight after; the bike hesitates going up and over the footpath to ride in and it stalls. Oh, crap, as it falls over on the left hand side spilling me unceremoniously on the driveway with my left foot trapped under the bike. Bystanders and Paul rush in to help, get me back on my feet and stand the bike up. Damage done was mostly cosmetic but included the clutch lever rotating and the gear lever being bent in and down. Fortunately it was all fixable and a quick check of the rider indicated that he was also unharmed (though pride severely dented). DEFINITELY needed the coffee then, so, a stop to gather my breath and caffeine-up and the decision was made to keep going as the bike appeared to  be still mechanically sound.

Early in the morning is the ONLY time to negotiate the Bankstown/Silverwater/Carlingford/Pennant Hills maze and we were onto the F3 far faster than expected. Ah, yes, the F3; what a ridiculous piece of road that is. Apart from being boring as boring could be, it is an assault upon your nerves, good sense, understanding of road rules and your sense of humour. Yes, we could have gone the usual backroad and joined up the Pacific at Hexham, but it is about 100kms longer and longer in time to  do it that was so, F3 it was.

Stopping for a rest stop at the F3 Caltex, we calculated that we were well ahead of time but seriously deficient in our calculations as to whether we could accomplish the Lakes Way in what remained of the day. Added to this was I was starting to feel pretty seedy as the effects of being dumped on the ground took precedence over the adrenaline that had been pumping through my body and it was a pretty easy decision to cut left through Morriset, around the west of the lake and start heading home again.

Afternoon tea at our favourite eating spot at Pokolbin revealed that any chance of staying the night in the area and heading home on Sunday was well and truly off the radar. A concert at Hope Estate had seen every possibility of accommodation sailing out the window. One of the “better” motels had, according to the online booking site, ONE room left for the Saturday night at over $1000 for the one room!!

That wasn’t a problem, though, because we were in the groove and looking easily able to get home in the day, possibly just stretching into dusk for the final part of the trip. So we pushed on, massacring the Ten Mile in an exhilarating, traffic-free run that stretched all the way to Grey Gums. As Jerry Reed said in his song, “”When you’re hot, you’re hot.”

Cup of tea at GG’s (I’m starting to think I have shares in the place) and we hit the road again. I am guessing that Saturday had been declared a “Boycott the Putty Road” day because there was, seriously, just NO traffic, at all. What a hoot.

However, dropping down towards Wilberforce I was really starting to feel the kilometres and the aching body was telling me I had done enough. So close…

So it was to be. Dinner at the Fitzroy Hotel, Windsor ($10 steak, chips and salad), a Jaffa ice cream at the ice cream shop and back to the motel. Bed at 1830!! Yes, I know, I’m old. The morning dawned cool and misty but we were on the road at 0630 and had a magic run through the snarl that is the  Penrith by-pass (ONE, yes, ONE set of red lights only for  the whole distance) and on to Picton down the back road. We were so early that our traditional stop at Peppercorn at Mulgoa was out of the question because they weren’t even OPEN when we hit town.

There was only one coffee shop open in Picton too, we were still too early, but it was excellent and after a cap and some raisin toast, we endured the speedway the is Picton Road and I rolled into home just before 0900. 626 kms in just a little over 24 hours. Not bad for a couple of old blokes. Was it fun? Heck yeah. Since when do you let a little spill spoil your ride?

I think I’ll just do a quick and dirty repair. It would cost more than the bike is worth to buy the panels and a panel beater could fix the broken bits and respray it but that would also be prohibitively expensive. So I will just have to ride faster so that people won’t be able to see my rough repair job.

And Sod’s Law? Well, you see, I had spent a fair bit of time on FRIDAY, washing and detailing the bike!