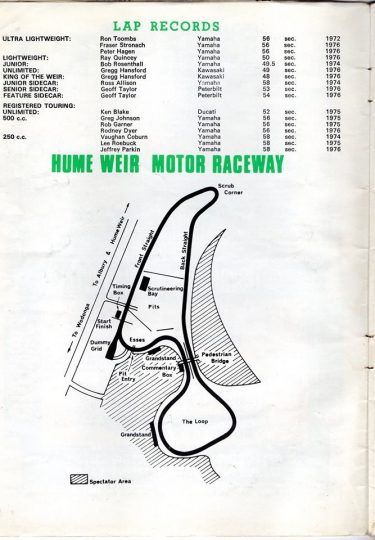 Today I conclude my series on race tracks that were part of my motorcycling story that have now passed into history and I want to look at another that was a sentimental favourite of mine.

Hume Weir Motor Raceway (always referred to as just “Hume Weir”) was a tiny track on the NSW/Victorian border that gained an historical significance way beyond its humble location.

The circuit was opened in 1959 and was mostly located in the floor of a quarry from which the original builders of the Hume Weir (the dam wall that dams the Murray River nearby and forms Lake Hume) had taken the earth to make the weir. It was substantially closed for racing sometime in the late 1970’s though it continued to be used as a circuit up until the 1980’s (most citations say that racing ceased there in March 1977, but this only applies to CAR racing) when parts of the now-closed track were used for special stages in car rallies.

The original track was 1.km long but was later extended to 1.8km in its final configuration. It was unique in many ways, one of these features being that the track pinched in at the exit to the quarry to such an extent that the two parts of the track were side by side, being only separated by a waist-high concrete wall from the top of which extended an inch or so of the reinforcing rods that were used in its construction. (see map above). Direction of travel was clockwise with competitors heading downhill from the Start/Finish line to a very tight first gear corner called “Scrub Corner” (for obvious reasons). From there, they headed uphill again along a sort-of straight, past the concrete wall on the right that took them into the quarry “The Loop” for a right, short straight long right that turned back into itself, then a left that led to another short straight that passed the concrete wall in the opposite direction, then hard on the brakes for a tight left/right esses and across the Start/Finish line, a very “busy” track.

The Weir was about a 4 hour drive from Canberra and I attended half a dozen meetings there in the closing part of the 70’s mostly as a spectator/photographer and once I even talked my way into the commentary box and did some race calling with the venerable Ken Dobson. In January 1978, the King of the Weir meeting at the track was the first one to which the brand new Canberra Road Racing Club sent an official contingent of riders. The story of this meeting and the now legendary wet weather ride by Bob Rosenthal is told on this site..

Before that, within just a few months since my first-ever road race meeting, I attended the Harvie Wiltshire Memorial Trophy meeting on the long weekend in October 1976. The extended story of this meeting is also told on this site..

If you follow up both of these articles you will understand a little of why I had such affection for this badly-maintained and dangerous track (there was grass growing out of the cracks in the bitumen on the main S/F straight!). However, let me close by saying why this tiny track has such historical importance. It was at the HW meeting in October 1976 that TWO world road racing records were set, coincidentally, both involving Kawasakis. Local rider, John Foster, became the first rider anywhere in the world to win a race on the brand new Z650 Kawasaki 4 cylinder road bike and TKA rider, Murray Sayle gave Kawasaki its first win anywhere in the world on the KR250 two stroke Grand Prix bike, see below. 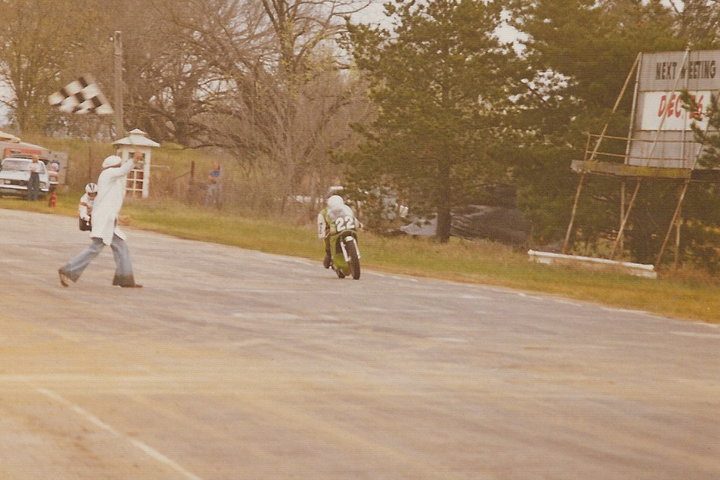 Hume Weir always turned on extremes of weather. Built in the floor of a quarry, as already noted, it could be (and was) punishingly hot (practice day for the KoW in 1978 the temps were well into the 40’s). A huge storm blew in during the night and flattened the caravan park at the end of the road and Sunday’s races were held in torrential rain!

Little remains of the Weir now. For many years it remained closed, with the bushland gradually resuming it, locked up tight by its owner, tyre magnate, Bob Jane but recognisable from the air..

..however, fears that the dam wall could fail led to the track being completely obliterated to get more fill to strengthen the wall. Little that is recognisable now remains. 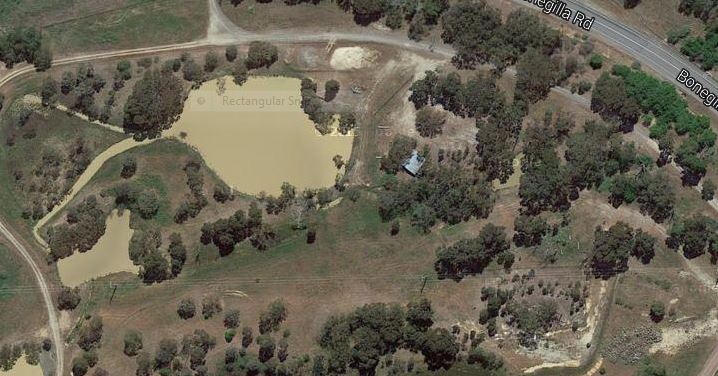 Why was Hume Weir so important? Well, apart from the historical facts listed above, it was important because it was the home track of a few of Australia’s finest riders including former GP ace, Graeme Geddes, but most significantly, Australia’s living legend of road racing, Robbie Phillis. It was on this track that Robbie first raced and it was on this track that he developed the skills that led to his amazing career.

There are a few more tracks that have disappeared but my acquaintance with them was brief, if at all. I only ever went to Surfers Paradise International Raceway once, for the 1985 Swann Series, but it is now long gone. I regularly visited Sandown Park Raceway in Melbourne for the final rounds of the Swann Series but, while the track remains, it is no longer used for bike racing. I never went to Winton Motor Raceway, nor Lakeside, but both of these venues still exist so they fall outside the guidelines for this series.

So I bring to a close my occasional nostalgic look at the tracks that became part of my life in those heady days. Do I wish they were still there? Too right, I do.