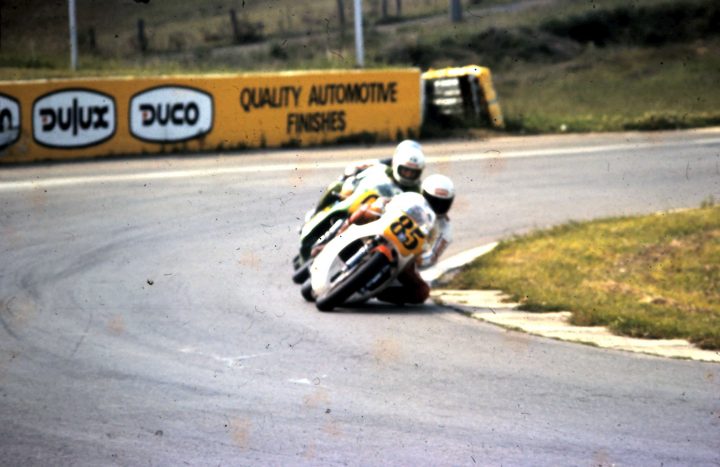 At the risk of again appearing to be a grumpy old man, I want to have a look at the motorcycle racing circuits that I remember from the golden era of the sport and bemoan their almost universal passing. If you gain enjoyment in seeing people rage against the machine, then you will enjoy this missive. If you find such exercises pointless and frustrating, then perhaps I am going to annoy you today. In any event, having already introduced two musical references, there are possibly some more to come.

My first bike race meeting was Laverton in 1976 but I was already familiar with the three NSW tracks from my previous life as a car racing fan. Oran Park, Amaroo and Bathurst were all stopovers on my following of the 4 wheeled side of motor sport. Living in Wollongong in the early 70’s both of the Sydney tracks were well within reach and I visited them often as a spectator.

At the outset I must again remind you that I have never raced, as you know. My subscription to the Clint Eastwood School of Racing (A man has to know his limitations) meant that I never had either the money or the talent to become a competitor.

The closest track to my place was Oran Park. Privately owned and set in the pastures in the middle of Macarthur territory, Oran was short, simple and possessed with all the characteristics to make it a great spectator venue. The circuit was set in a depression in the paddocks thus ensuring that it would be blessed with elevation changes (essential for the enjoyment of both competitors and spectators,) and it was designed so that the whole of the track was visible from any spectator viewpoint.

The original layout (the South Circuit) was, as noted, quite short, less than 2 kms per lap if I recall. It made for frantic racing and the crowds lining BP Corner and down the back straight at the Flip Flop, were huge back in the day. Imagine, if you will, fields of 30 or so bikes funnelling into CC Corner, a tight left hand U Turn at the bottom of the straight, and it will be very clear how tight and exciting the racing was.

As cars and bikes became faster and international events began to be attracted to Australia, Oran Park was lengthened to make the lap of Grand Prix distance. Limited by the confines of the block on which it was built, the owners found an innovative way of achieving the longer lap without moving the action too far away from the crowds. They simply extended the main straight and made the new part of the layout into a Figure 8 one with the track first going under a bridge, then turning right then right again before going over the bridge and joining the old track on the run down to Suttons Corner.

I loved Oran as a spectator venue and also one on which to photograph. It provided almost limitless opportunities for both pursuits. It was primarily at Oran that I honed my skills as a commentator, regularly climbing up the rickety ladder into the Eagles Nest to call the races along with Ross (Splinta) Penecost and David Curtis.

Sadly, the owner of the track began looking at the revenue that could be gained by selling the land for housing purposes and the infrastructure began to be allowed to run down. Despite his assurance that he would build a new track on other land that he owned, when the track finally closed in 2010, no replacement was provided and the land is now covered with McMansions. To their credit, the developers have ensured that a strong connection to Oran’s past is preserved, with the naming of all the streets after motor racing/motorcycling luminaries.

It is a pity that they did not ensure that some physical evidence of the track would remain, but it seems that the very first thing they did when the bulldozers moved in was to completely obliterate anything recongnisable about the track.

I loved Oran Park. I did actually ride around it quite a lot back in the 80’s and 90’s doing duty as a travelling marshal at Club Days and I did my only ever track day there in 2006 so I can at least say that I experienced the track at more than just highway speeds. I was also privileged to commentate the very last race meeting there, the BelRay 6 hour Race in November 2009.

As for the promised replacement? No sign of it has yet appeared.

Amaroo Park was also small, tight and exciting. Set in a natural amphitheatre, Amaroo was located in the prestigious Hills District of north western Sydney, surrounded by million dollar rural properties and retreats of the rich and famous. Owned by the ARDC (Australian Racing Drivers Club), Amaroo was a multi-purpose facility housing not only the road racing circuit but also a MotoCross complex, Short Circuit track and areas where observed trials could take place.

Like Oran, Amaroo was a tiny track, just 1.9km per lap. There was neither the room nor the interest in expanding it and it remained so for the whole of its life. Car racing and Superkart racing also took place there and the sight of huge V8 sedans lumbering around the track in glory days of Group C remain a highlight for me and many others who remember the days with affection.

Of course, Amaroo, though, is famous for the fact that it hosted the Castrol Six hour production bike race for almost the complete lifespan of the event. From 1970 to 1983 Amaroo in October was the place to be. With lap times being under a minute in the later years of the event and non-electronic lap scoring being all that was available, it was no surprise that lap scoring arguments often went on long after the event was over. When told about the Six Hour, touring car luminary, Dick Johnson, remarked that running a six hour bike race around Amaroo was kinda like running a marathon around your clothes line.

Nevertheless, the Six Hour races were the highlights of bike racing at Amaroo. Various state title races were held there, the world’s first true superbike racing happened there with the staging of the Chesterfield Superbike Series in the early 1970’s and numerous Club Days and smaller meetings crowded the Amaroo calendar.

If you chose to spectate up on Bitupave Hill, you could see the whole track and it was always standing room only come Six Hour time. However, constrained as it was by the topography, opportunities to extend the track and provide more run-off area for the competitors simply did not exist and Amaroo was consequently a very dangerous track on which to race if you got it wrong. As the bikes got faster, they started to outgrow the track and even moving the earth bank in the loop at the back of the circuit further away from the track did not do enough to promote rider safety. Sadly Amaroo was the scene of far too many serious and fatal accidents in its later years.

And pressure on the NSW government from the environmental lobby was growing. Stupid people who bought houses in and around the area began lobbying to have the track closed on noise grounds even though they had bought their houses knowing that the track was there. Increasingly, the Dural/Annangrove area was being seen as one of the last places in Sydney’s north where rural estates could be developed and the writing was on the wall. The ARDC also was becoming increasingly interested in the new track in Sydney’s west and it was clear they would not have the budget to run both venues.

So, Amaroo was sold up for housing. We were told that the area could support many houses and help relieve the pressure on Sydney’s rapidly expanding waistline. What we got was something else again. While it may seem churlish to criticise, once the land was sold it was quickly subdivided into acreage estate blocks and, to this day, probably less than a dozen houses occupy the land that once echoed to the sound of motor sport.

I miss Amaroo too, though not as much as Oran. Too many bitter memories attach to the Annangrove layout and even the halcyon days of the Six Hours and their wonderful memories can’t quite make up for the loss of young people who paid the ultimate price for the pursuit of their passion.
That’s enough for now. In other posts and pages I have detailed some of the great races that I saw at these two Sydney venues so I won’t revisit them. Next time I will look at some of the rural tracks that, like Oran and Amaroo, are sadly no more.