The following is the text of an article that I published quite a few years ago. It had been updated and considerably expanded.

As an avid watcher of motorsport telecasts, I get a bit tired of the rubbish and hyperbole that assaults the eardrums from the various “commentators” One of my “favourites” is the British MotoGp commentator. If he says, “*.* is absolutely flying.” one more time, I think I’ll put my shoe through the set.

But a favourite expression that I’ve heard a lot is the reason for my post today. How many times have you heard someone say, “Rossi is breaking the laws of physics out there.” or something similar? Now I know commentators are always striving for expressions that will stick in the listeners’ minds, heck I do the same thing myself when I have the microphone in my hand, but if you think about it, the expression, as it stands, is completely wrong.

Over the last few years it has been Marquez to whom this expression has been applied. The first rider in the modern era to routinely scrape his elbows as well as his knees on the deck while cornering, he has even come back to the pits with scrape marks on his SHOULDERS. The advent of MotoGp’s astonishing camera technology plus the on-board analysis that pops up on our screens while we are watching, tells us that the modern GP stars are achieving lean angles that exceed 65 degrees, a figure that is a bit hard to comprehend. Perhaps it would mean more if we took our bikes out into the driveway, leant them onto something soft then gradually tilted them over until we had reached the same lean angle. Then stand back and let it sink in. If you can’t do that, maybe this will help. 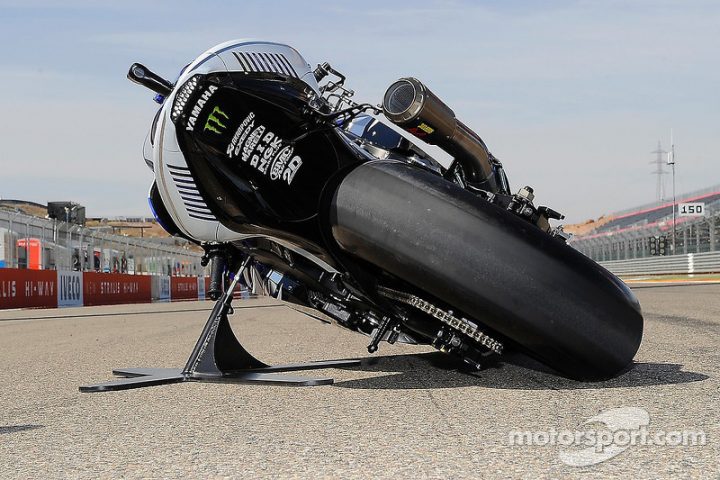 As an aside, it must be said that Marquez isn’t the first rider to achieve scraping his elbows. French GP star of the 90’s, Jean Phillipe Ruggia did it often in the day, AND on far less sophisticated tyres, I might add. 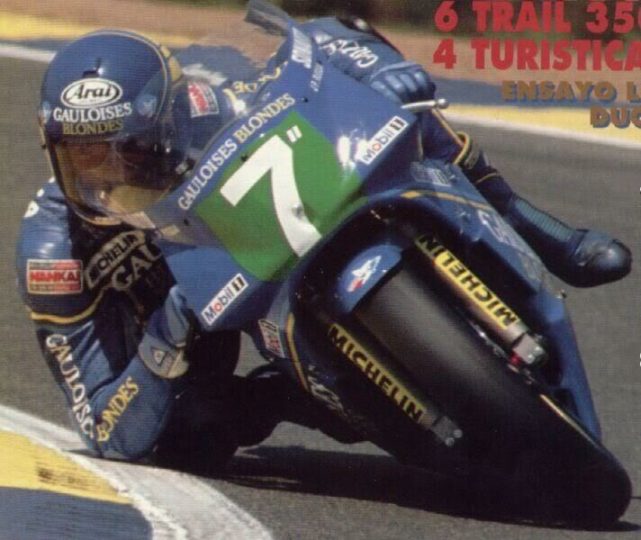 This aside, the fact is that the laws of physics simply can’t BE broken. You can go very close to the edge of them; you can demonstrate how they work, you can even show what happens if you ask your motorcycle to do something that is beyond its physical capability. 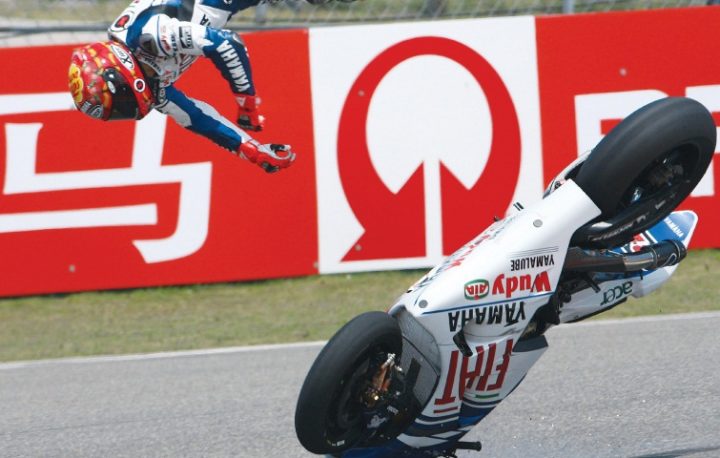 And it’s not just lean angle that is in play here. We have become almost blasé about how modern GP stars can recover bikes from seemingly hopeless situations and continue as if nothing has happened. Being a GP star isn’t easy; if it was, everybody would be able to do it. I confess that I get the shivers when I see some of their antics, so close to the line are they treading. As a member of the MRA (Mediocre Riders Association) I am more than happy to allow my heroes to exhibit such skills. And, while I was on the road the other week, I started thinking about physics vs confidence. (see, I told you solo touring is great for getting your thoughts in order)

Now I’m not a scientist and I don’t understand at all the physical laws that govern how a bike can lean over as far as it does without actually FALLING over, but I think it has something to do with the forces that are making it go forward are greater than the forces that are trying to tip it over (I’m VERY happy to stand corrected on this).

I’m guessing that understanding those physics could be a great help in getting your mind around how far you can lean in a corner before it becomes too far, but you don’t HAVE to be a physicist to grasp and accept the fact that, it doesn’t really matter how far you lean over, as long as you keep going forward at an appropriate speed, you’re not going to fall down (external factors like diesel on the road, amount of tread on your front tyre, etc, etc.)

Understanding this in a theoretical sense is difficult but not impossible. But accepting it and applying it is a horse of a very different horror.  Do GP stars switch off their fear receptors when they go out on track? Or is it just that, having achieved miraculous lean angles previously, they are confident that they can do it again? I guess it might be the combination of both. As a road rider, however, I look at what they do and I think to myself, “To hell with the physics, I just wish I had that much confidence.”

Because it IS a confidence thing. I ride with a mixed ability group on the road and I have always accepted that there are riders in the group who ride much better than I and some (a few) who don’t ride as well. And I believe that it all comes down to confidence.

So, what can you do to increase the confidence without ending up in the bushes?

Firstly, TRUST YOUR TYRES. Most riders really have no idea just how competent, indeed, amazing modern tyres are. Riders who served their apprenticeships when tyres were Japanese rim protectors, like I did, probably find this even more difficult. Fact is that even half-way decent road tyres will hang on way past the point that you are prepared to push them. Think back on all the motorcycle crashes that you either had, have witnessed or know about. How many of them were caused by tyres losing adhesion? I’m not talking about loose surface/rain/diesel etc. Just when, on a good road surface, did the front end just wash out and dump the rider on his head? It almost never happens. Modern tyres are sensational, trust them.

Secondly, if adhesion and lean angles are important, buy the stickiest tyres (especially front tyres) that you can. And don’t go on the forum and ask, “What’s the best tyre?” Any and all of the answers will probably be useless to you. Better to narrow it down, “I own a GSX-R1000 and I want to do some spirited riding on the road and a track day or two, what is the best tyre for this type of usage?” Your front tyre is most important. I was very impressed at a MotoDNA course I attended (as a helper) to see ex-GP star, Peter Goddard, telling the class that knowing what the front end is doing is the most critical thing. Instead of getting hung up on rear ride height, shock and spring adjustment, he said, concentrate on getting the front end right. (it’s not a co-incidence that the modern MotoGp stars seem to be pretty much oblivious to what the rear end of the bike is doing while they are racing)

“But, won’t sticky tyres wear out quicker?’ Yep, they will, but what do you want, grip or longevity? Decide what you want most and spend accordingly. I would add that modern Sports/Touring tyres are NEARLY as good as gum balls these days as proved in many blind tests, so consider them as well if you need a compromise.

Thirdly, enrol in some well-accredited advanced riding courses. There is no better way to build your confidence than to have an expert help you with bike setup, another one school you in ride dynamics and another coach you on what you are doing wrong and how you can fix it. Absolutely recommended.

Fourthly, do some track days (not instruction days). Get out on the track and APPLY what you have learned. Remember I said that GP stars have the confidence that they do because they have practised, ad nausem, the skills of their trade? It’s no different on the road. The difference is that you can’t really practise these skills in a controlled environment on the road. So, get it to the track where the environment IS controlled and where any given riding situation can be replicated, over and over again until you are satisfied you have it right.

So it comes down to a battle between physics and confidence. The physics say that we can corner faster, lean more, scrape more bits of undercarriage on the road, rub out those chicken strips completely, stay on OUR side of the road AND safely negotiate the corner while having fun at the same time.

It is our our minds that keep telling us we CAN’T.