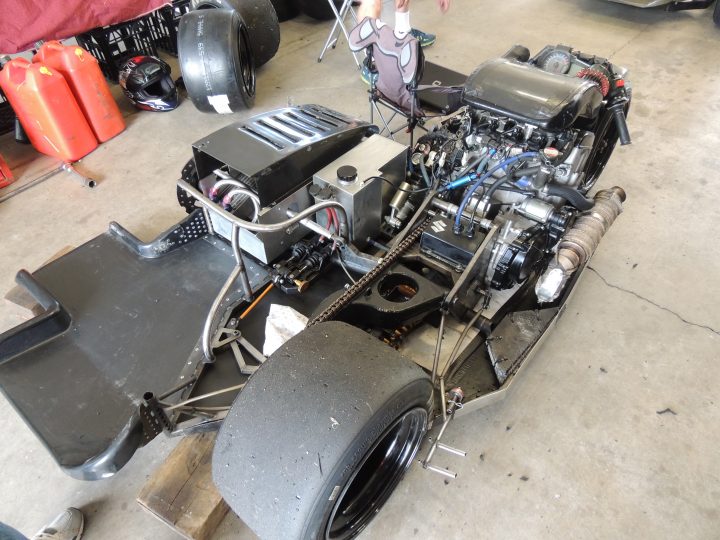 As is so often the case, opening up a subject inevitably leads to offshoots from it that can be equally interesting. It is, in fact, a case of Zymurgsky’s Law of Emerging System Dynamics that says that once you open up a can of worms, the only way to re-can it is in a larger can. And so, having mused on the subject of sidecars, I am lead into two particular sidecars and operators of them with which I have had more than a passing interest.

In the early days of my road racing obsession, solo motorcycles were my sole interest. Sidecars existed and I even took photos of them right from the beginning. But then, as now, sidecars and the sidecar fraternity, were very much the poor relations of the solo racers. The outfits were usually pretty scrappy affairs and the degree of mechanical maintenance and general reliability left a lot to be desired. If races were going to be cut from the programme due to time constraints it would always be the sidecar events that got the chop. Sidecar crews pitted by themselves in the pits and the distrust that often grew into antipathy was clear to even the most innocent observer. Sidecars leaked oil on a regular basis (see above comment about maintenance and reliability) and often WERE the cause of delays at meeting while the track was cleaned. If sidecars had accidents they were inevitably worse than solo accidents and also led to long delays for pickup and first aid attention. Sidecar people saw the solo riders as glamour boys and bemoaned their second rate status but, at the same time, contributed to it by their less than professional approach to the sport.

Sidecar racing was stronger in Victoria than it was in NSW and that situation has not really changed that much. It should be noted that the pendulum has swung in favour of the West in recent years with many competitive outfits doing the drag across the Nullabor to the eastern state meetings. The category was dominated throughout the 70’s on the national and state level by the immaculate black and gold TZ-engined outfits of Geoff Taylor and Barry Frazer who regularly took home titles in both categories. (500cc and Unlimited) The advent of the two stroke era did a lot towards reducing the perpetual oil leakage problem associated with sidecars but also marginalised many competitors who simply could not afford to adopt the new technology.

In NSW the main competition came from the father and son combination of Stan (dad) and Steve (son) Bayliss. Riding the #30 and #31 outfits with various passengers over the years, Team Bayliss was as close to the Frazer/Taylor class as possible, but just not quite there. Peter Campbell, crippled by polio as a boy and only able to walk with the aid of crutches was (and still is) a brilliant engineer who made up for his disability by cleverness and “thinking outside the box” engineering.

And then there were the two sidecar teams with which I had a close association.

Ray Spence, from Canberra and his passenger, Paul Feeney, from Goulburn were very early members of Canberra Road Racing Club. Ray was a good engineer and a polished racer. He believed in immaculate presentation and preparation and his outfits always looked like a million dollars. Racing a Windle outfit with a TZ engine, Ray was as close to Taylor and Frazer in attitude and performance but sadly just behind the Victorian stars in terms of budget. A dedicated member of the persecuted minority that the sidecar racers saw themselves as being, Ray raced with a determination to show the solo fraternity that sidecars racers were the real deal. Ray proudly wore the yellow CRRC logo on his outfit and followed the trail religiously, even racing in WA when the ARRC rounds were run there.

And he had a mixture of success and bitter failure. With Paul in the chair they had a fearsome accident at a Swann Series round at Sandown Park that resulted in some pretty dreadful injuries. Coming down the hill off the back straight, the wheel of the chair drifted onto the grass and the outfit cartwheeled a number of times (I have the incident of Super 8 movie film if I can ever get it off onto DVD). After being checked out by the medical people at the track and told there were no major injuries, the crew loaded the trashed outfit onto the trailer and drove straight through the night to Goulburn. Feeling even worse in the morning than he had the night before, after enduring an agonising ride home, Paul checked in to Goulburn Base Hospital Emergency Department to be eventually told that he had a broken pelvis. Don’t let anyone tell you sidecar racers aren’t tough.

Paul was lured away from sidecars by superbike guru, Ross Hannan, to ride the ex-Graeme Crosby Z1R superbike which brought him considerable success and notoriety and, eventually a win in the 1985 Castrol Six Hour race. Laurie Nichols took over as Ray’s sidecar passenger and was rewarded with the team winning the NSW championship in 1980. Like so many before them, they sought fame and possibly fortune overseas and went to Europe only to find, as everyone else had, that the massive gulf in technology from what was top of the heap in Australia and the outfits against which they were racing in Europe (Biland et al) meant that they were condemned to the bottom half of the grid IF the were accepted to race at all and IF they could qualify. Ray returned to Canberra and announced his retirement, throwing his considerable energy into establishing his own business specialising in servicing Range Rovers, a business that he still runs with great success having established an excellent reputation.

And that should have been the end of the story, but, of course, it is not. Racers remain racers no matter how many years they stay away and in the latter part of the 90’s Ray applied for membership of CRRC again and announced that he was going racing again, chasing the Australian title that had been so elusive nearly 20 years before. A new LCR “worm” outfit, ZX10R Kawasaki engine and CRRC founding member, Jon Winders in the chair and he was off again. Finishing 2nd in the title chase in 1999, Ray and Jon clinched the title in 2000 crowning a long career.

Then there was the other CRRC crew.

Laurie and Ken Fisher were ex-pat Englishmen, lured to Australia with the promise of better times. Talented and successful civil engineers, they set up business in Canberra, where business was booming, houses were growing like weeds and work was a-plenty. It didn’t take long before they sought out CRRC and started making enquiries about racing here. Products of the ferociously competitive club racing scene in northern England, they brought all the enthusiasm and “can do” approach that was part of racing there, to CRRC. Seeing so much of how their clubs were run back home reflected in how we ran ours here, they jumped in with both feet, dragging their respective wives (who were also enthusiasts but a little “leery” about the “boys” getting back into racing at their “advanced” age) they became outstanding supporters of the club. They became actively involved in the organisation of the road closure meetings and were tireless in seeking out sponsorship opportunities.

When they went racing they were enthusiastic and a real pleasure with whom to work. They followed “the trail” like they had been doing it for years and became an integral part of the scene. The Windle outfit with the TZ engine was “the go” and their’s was a good example. Ken was one of the first to see that the age of the two stroke was numbered and so he commissioned one of our other club members to design and build a new outfit from scratch, based around a seriously hot-rodded Honda CBX 1000 six cylinder engine. The bike was bought and the engine received a workover and everything was ready to be mated to the frame but fate intervened in the form of a serious on-track accident that resulted in fracture, injuries and a protracted rehabilitation.

At the same time the boys (they were older than me but I thought of them as that) were getting involved in mini bike racing at the local MX track and it wasn’t long before the dream of road racing glory on the tar gave way to a frantic fostering of young talent on the dirt. Recognised just recently with life membership of the mini bike club, the boys threw themselves as tirelessly into the new venture as they had their sidecar racing. Their passion probably grew more intense as they saw young kids like Rod Colquohun, Stewart Bennett and others make their way into the sport. Their background in the UK club racing scene made them realise that you had to plan for the future and the present day health of dirt track racing is in no small part due to the work that the Fisher family put into the ACT Mini Bike Club over the years.

Sons and grandsons have followed their forebears into roadracing, however, with Ken Fisher Jr winning two 125cc Australian championships in the 90’s, Mark and Roy also contributed to the family legacy.

Sidecars? I still don’t get them, but I can see why some people do. And I’ve been privileged to watch some of the best and know some racers personally. Can’t ask for much more than that.

PS: After publishing this article yesterday I had a message from Mark Fisher containing this photograph. 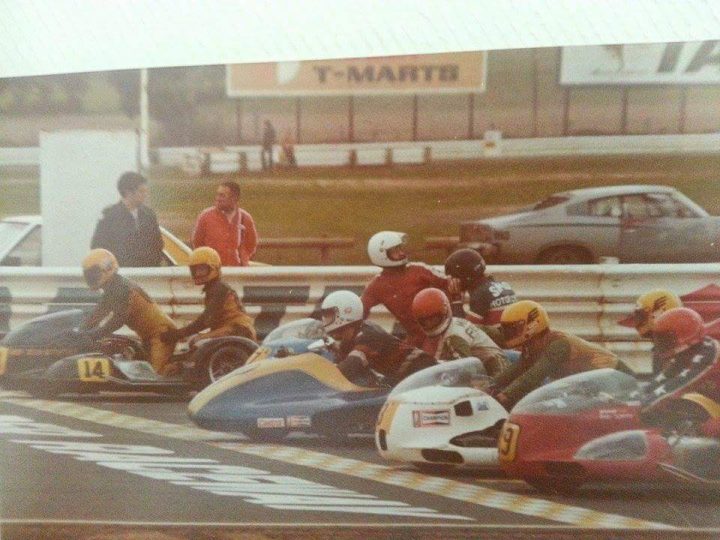 The date is 1979. The place is Calder Raceway in Melbourne and the blue and yellow outfit is Ray Spence riding the first rear swing Windle outfit in Australia. He finished second in both sidecar races to Geoff Taylor and Barry Frazer in the #14 outfit. This was when Ray was “between passengers”, Paul having left and Laurie having not yet been drafted into passenger duties. In fact, Laurie was there with Ray at this meeting but only to do some “training.” So Ray’s passenger that meeting was, get this, Mark Fisher! How amazing is that? Mark is in the green and white leathers that he wore when racing his solo bike.