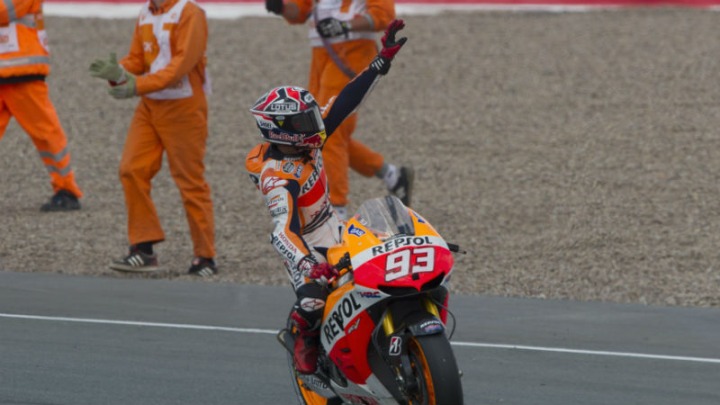 By now all my regular readers will be aware that I am an unashamed Marc Marquez fan. While I would love to be able to have an Aussie rider in the top team for whom to cheer, in the absence of that I choose to cheer for the rider who, I believe, is going to rewrite all the racing records in the next few years (not that he hasn’t made a big dent in the job already)

MM93 has now won 4 MotoGp races on the trot with his stunning win at Brno last night. The last time that happened was in 2005 when Rossi did it. He has now won 5 MotoGp races so far this season, equalling Rossi’s record also. But, with 7 more races to go this season, it seems inconceivable that he won’t beat that record also. And, looking at the bigger picture, the other major record now firmly in his sights is the winning of the world championship in his rookie season, something that hasn’t happened since Kenny Roberts lifted the title at his first attempt in 1978, 35 years ago.

For those who sagely said that he would struggle to begin with after graduating from the relatively tame Moto2 bikes, it is time to think again. If anything, graduating to the main game has made him a faster and better rider. Jorge Lorenzo gave it his all last night; in parc ferme afterwards he was spent and shattered. The body language was saying “Just what do I have to do?”

MM93 now has a 26 point gap (more than a race win) up his sleeve ahead of his team-mate, Dani Pedrosa (who must be getting heartily sick of Honda hiring new riders who then go out and beat him!) and a 44 point gap on Lorenzo who looks to be out of it at this stage (yes, I know there are 7 races and over 150 points still on offer).

But Marquez’s statistics don’t tell the full story and it is important to note this. Yes, the kid is a machine, an alien, or, as someone said last night, perhaps even extra-terrestrial. But he accomplishes what he does without being a paper cutout of a rider, a criticism that has been fairly levelled at quite a few of the Spanish school graduates. It has only been in recent years that we have become used to seeing Dani Pedrosa smile (though he wasn’t last night). Along with his extraordinary talent, MM93 brings a youthful enthusiasm, a ready smile, an incredible work ethic (according to paddock insiders) and a humility that is rare to the point of exceptional at this level of the sport. And, as  noted elsewhere, he does this without having to resort to hokey after-race skits. One more vitally important part of his impact has been his embracing of the social media to keep his fan base informed. The Spanish school continues to turn out well-rounded athletes.

And, speaking of the Spanish school, while we in Australia are bemoaning the plethora of Spanish riders that now crowd the grids in every class, we should remind ourselves that it is only because the Spaniards are doing their job of training and grooming future champions better than us and better than any other nation, in fact that is causing this situation. If promoters and administrators of the sport here were less interested in their own egos and in lining their own pockets and more interested in promoting the sport, we could easily be doing what the Spanish are doing. God knows, we have the talent pool, it just needs to be developed properly.

In 2013 there are at least 35 Australian riders competing overseas in various racing categories. And, without exception, every single one of them has made it to where they are without any substantial form of support from local racing authorities here. Indeed, for an Australian to break into the top level now would be in spite of and not because of what MA and the other governing bodies have done to “help”

However, lest it all be doom and gloom, let me put in a big plug for Paul Edwards and the MRRDA. Working on the model set out by Tony Hatton’s Moriwaki 80cc series of the late 1990’s (that produced a shed load of fine riders) Paul, and his crew are quietly and efficiently going about their business of grooming the next crop of Australian, and potentially world, champions. Having been able to closely observe the processes and the end results I can tell you that the MRRDA IS the real deal and stands the best chance by a country mile of producing our future champions. Unfortunately, the career path AFTER MRRDA is simply not there as our local promoters are far too interested in boring street bike-based racing that does nothing towards grooming the graduates for the real classes of racing that are being done in Europe. How do the Spanish groom their riders? Through racing them on pure racing bikes.

Let me make it very clear. World Superbikes and World Supersports is a great series and a fine product, but it is NOT, note that, NOT, part of the career path into MotoGp. It has become and will remain the career path for MotoGp riders AFTER their MotoGp career is over. Training our riders on a steady diet of street bike-based racing will NOT get our next MotoGp champion, it’s as simple as that.

I long for the day when we see another Mick Doohan or Casey Stoner riding for a top MotoGp team and winning a world championship. But, despite the fact that we probably have more talented riders per capita in the sport than we have ever had, I see no prospect of that happening any time in the foreseeable future.

Australian promoters and administrators need to get off their fat backsides, stop milking the sport for what money they can personally make out of it and start promoting our young riders. If they don’t, then we are in for a long drought of Australian riders at the top level of racing.

In the mean time, like me, sit back and watch the rider who history may well record as the greatest motorcycle rider of his age. It’s going to be an exciting ride.