You are here: Home / June 2013 / Restoration vs Preservation 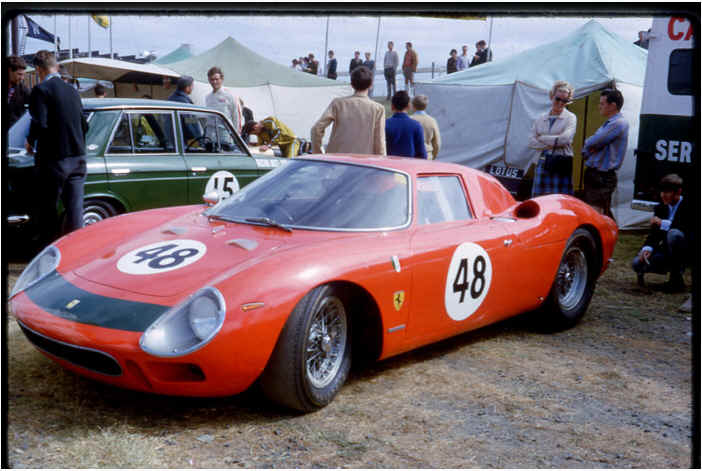 Long term lifers are probably wondering why I begin my blog today with a picture of a car. Well, let me explain. First of all, this isn’t just ANY car, it is a 1964 Ferrari 250LM, one of a rare breed of European thoroughbreds built by Ferrari to win the Le Mans 24 Hours race. And, rare as they are (there were only ever 33 built) this particular LM is even more special. It was bought by Sydney motoring journalist, the late David McKay, and was raced in Australia and Asia under the banner of Scuderia Veloce, a Sydney exotic car dealership. Famous names such as Sir Jackie Stewart, “Big Pete” Geoghegan, Andy Buchanan, Spencer Martin and others drove this car in sports car races and endurance races until the late 1960’s when it was increasingly uncompetitive and was retired.

In David’s care, the car was cossetted and cherished as a significant part of Australia’s motor racing history. However, as David aged and he eased into retirement, he began to think about selling the car which he finally did. The asking price was spectacular, rumoured to run well into seven figures and, as such, it was always likely that the car would find its way overseas where the big money is. And so it was that the American billionaire and collector, Ralph Lauren, was named as the car’s new owner.

What happened next is tantamount to criminal activity. Lauren had the car taken to his workshop where it was completely restored. Worn parts were replaced, body panels made new and every trace of the car’s incredible racing provenance was systematically and completely stripped away. What emerged from this million dollar process was a brand new, shiny, 1964 Ferrari 250LM. And thus an irreplaceable piece of Australia’s motor racing history was lost forever, for the car that now adorns Lauren’s museum is NOT the Scuderia Veloce LM any more. In his dying years, David confided to my brother that, had he known that Lauren was going to destroy his car he never would have sold it.

So, restoration or preservation? It is no surprise that, over the last 50 years or so, the Americans have led the way in over-restoration. “Blessed” with a wad of money and often a paucity of good taste, the American car restoration business had succeeded in rebuilding thousands of wonderful cars of yesteryear to a standards that far exceed what the car was like when it was new. Pebble Beach Classic Car Show, the “epitome” of this process, features cars on which literally millions of dollars have been spent and they are paraded before the adoring crowds as if they somehow represent the very best of 1930’s or whatever it was, motoring.

In fact all that they represent is that the degree of bad taste is roughly equivalent to the depths of the pockets of their rich and obnoxious owners.

So, imagine my delight last night when I was watching one of my favourite shows on TV, “Chasing Classic Cars.” For those of you who haven’t seen it, it is hosted by Wayne Carini, a native of Indianapolis who now runs an exotic car dealership in Connecticut, USA.  Wayne is the real deal, a finder, restorer and seller of old and classic cars as well as a facilitator for owners who wish to sell their cars and want the best advice as to how to do it. I have long been an admirer of the honest and forthright way he conducts his business and the “reality” of the show compared to what passes for reality TV these days. Last night’s episode featured Wayne trying to sell three old, unrestored cars that have been part of his private collection as well as seeking to purchase two similarly conditioned cars for two of his clients. And the venue for this episode was the Bonhams auction at the Simeon Museum, a museum that features a full collection of old and classic cars that are distinguished by one feature; all the cars are unrestored.

It was wonderful to hear the director of the museum say that, for the last 60 years, car enthusiasts had been going in the wrong direction, spraying millions of dollars at cars instead of leaving them the way that they were found. I nearly jumped out of the chair and cheered. The subsequent auction, of totally unrestored and original cars, was, according to Carini, a great success and the Bonhams representative who said that this was their first attempt at such an auction, seemed equally pleased.

And, in the process of the story, he appeared to coin a new term that should be applied to cars and vehicles of this type. He talked about preservation as opposed to restoration. I immediately thought that here was something on which it was worth remarking. What SHOULD have been done with David McKay’s LM? It should have been PRESERVED rather than “restored”. Lifers will know that this is precisely the attitude that I took in the restoration of the Shadowfax Kawasaki. Though it WAS a restoration rather than a preservation, I was at pains to ensure that as much of the original bike be preserved and reused even though that often led to considerable difficulties and extra expense. The only major new parts on the bike are the fibreglass bits and the Marzocchi shocks (though they are of exactly the type that the bike originally wore). There was no attempt to polish or improve any parts (even though the multitude of custom alloy bits would look great polished) and even the paintwork is actually better than it was on the original bike, though I was over-ruled in this case.

The other side of the Lauren coin is to be found right here in Australia in the excellent collection of historic Australian racing cars maintained with such loving care by the Bowden family at Buderim on Queensland’s Sunshine Coast. Here is a “time warp” collection of cars whose owners are painstaking in preserving the racing patina of their collection and maintaining the cars in “as they were” condition, even down to stone chips, minor accident damage, frayed upholstery, etc.

Restoration? In some cases, as in completely derelict barn-find cars, it is necessary, but it should only be to the level of what the car’s condition would have been as new, not over-restoration. Preservation? Vastly preferred. It seems the movement is gathering pace in the USA; let us hope that it takes on here as well.