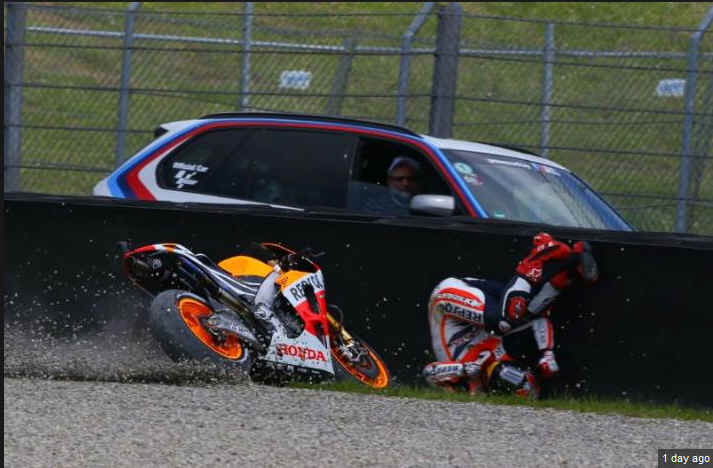 Last weekend’s Italian Grand Prix at Mugello was significant for a number of reasons, some trivial, some important. Importantly, World Champion, Jorge Lorenzo, reasserted his dominance at the top of the list after having been comprehensively beaten in the last two outings by Dani Pedrosa. Helped by the Yamaha’s more “friendly” use of the rear tyre in the middle to closing stages of the race, Lorenzo waited until he saw that Pedrosa was beginning to struggle, then simply motored off into the distance, knowing that there was nothing Dani could do about it. An important psychological boost for the defending champion.  Pedrosa maintains his lead by finishing 2nd but Honda must do some work to ensure that a similar scenario doesn’t play out again at the faster tracks.

And, speaking of faster tracks, the talk of the weekend was the astonishing and lucky “bail-out” by Marc Marquez during the first Free Practice session. Drifting a bit wide on the super-fast main straight, Marquez sensed that the bike was lost and jumped off at over 200mph, the fastest ever recorded crash in Grand Prix racing where a rider survived. He also survived with minimal injury, an even more astonishing statistic. Data retrieved from the data loggers in his leathers indicate that he sustained 25g’s of force several times during the accident.

Despite the severity of the impact, he got away with it with much less injury than you’d expect. This morning this report is in from his medical team this morning.

“Marc Marquez has returned home to Barcelona and visited Doctor Xavier Mir for a medical this afternoon. According to Doctor Xavier Mir: “Following the initial examination that we performed on Marc at Mugello, in which he underwent his first X-rays, we weren’t convinced about the condition of his right shoulder. Today we have performed some more detailed X-rays on him, which confirm that the injury at the upper point of his humerus is minimal – a small fissure. As such injuries can compromise the condition of tendons in the shoulder, we also gave him a Doppler ultrasound scan. This ruled out any broken tendons. What he does have is a small inflammation of the tendons, but this is something that can be treated in a matter of days with physiotherapy. The progress in the 24 hours following the injury was very good. At first he had some difficulty lifting his arm, but this has improved now. He now only has some issues raising it sideways, which again is something that with physiotherapy he will completely recover from in time for the Catalan Grand Prix”

But the young Spanish star achieved more notice on the weekend by having two more minor spills in practice and qualifying then crashing inexplicably out of the main race while holding second place. Telemetry from the bike indicates that he took the corner where he crashed in exactly the same way the lap before and does not indicate the cause of the accident. Since both tyres lost adhesion at the same time and the bike simply slipped away, it all points to a lack of adhesion on the extreme edge of the tyre, the issue to which I referred earlier in this article.

In crashing out of the race, Marquez lost the opportunity of setting a new record for the best performances by a rookie in the MotoGp class, However, he can take some consolation that he equals the best-ever showing by a rookie, set by Max Biaggi in his novice year in 1999.

However, there were two falling stars on the weekend. Valentino Rossi, in his “home” race, suffered the indignity of crashing out on the first lap, courtesy of an inattentive Alvaro Bautista. If ever there was a scenario that illustrates how Rossi’s star has waned, this is it. Failing to qualify well always leaves you exposed to possibilities like this and Rossi is still finding it hard  acclimatise to the Yamaha, despite it being substantially unchanged from 2 years ago. His language in press conferences and his body language indicate that he is still not a happy camper. Two years of struggling with the Ducati have obviously messed with his mind far worse than what we first thought. Watching Dovizioso put the Ducati on the front row can’t have helped.

In the celestial realm, stars rise and they fall. Despite the substantial hiccup on the weekend it is very clear that Marquez is a star on the rise and that Rossi’s star is falling.

Also, thanks to my good friend, Peter Geran, this excellent article from Britain’s Autosport magazine abut life after MotoGp for Casey Stoner.