Are for relaxation, or so they tell me. But I seem to have spent all of it so far cleaning up my study, relocating cupboards and generally doing stuff that keeps you pretty busy. Having a break now but I bet there will be more to come.

Overnight more stuff happened. Let’s see if I can summarise for you.

Yesterday I flagged that RdP could be off to Ducati as a test rider, but, given the FIM’s relaxation of testing rules (see yesterday’s article) that would seem to now be unnecessary. Despite saying that he had no interest in CRT, it now seems that Randy could be off to Aspar’s team ON a CRT bike. Given Martinez’s close links to Aprilia, it should come as no surprise that the powerplant will be an Aprilia. 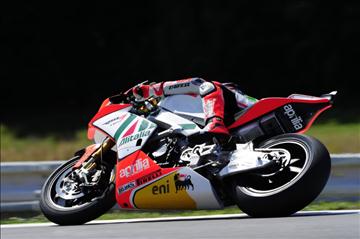 However, there is more to this scenario than what meets the eye. Overnight comes the suggestion that Aprilia may be going to not only supply engines to CRT teams, but also a chassis as well. This effectively would make them a manufacturer in the same sense as Honda or Yamaha but, instead of going into the top league, they could benefit from the more liberal regulations of the CRT arena and become a supplier. It makes sense because the end of 125’s effectively brought Aprilia’s role as a manufacturer of Grand Prix bikes to an end.  Since other CRT teams have already announced that they will be using Aprilia engines, I wonder how many of them will be using the complete Aprilia package? Factory test rider, Alex Hoffman, has been cutting laps of a WSBK-spec RSV4 on Bridgestone GP tyres at Valencia this week so it looks pretty much a “goer”

So, where does this leave the grid? Well, at the moment the top teams all now seem set with 12 “genuine” MotoGp bikes set for 2012 (following the official withdrawal of Suzuki overnight) The rest of the grid which must, according to the legal niceties, be at least 17 bikes, will be made up of CRT bikes and the current thinking is that it could be as many a 20 bikes! Yes, that’s right, 20. That would make a grid of 32 bikes, nearly twice what we have been used to seeing in the closing part of the 2011 season. Of course, the grid will be a two-part one with the factory bikes blitzing off into the distance and the rest of the CRT bikes fighting over the crumbs. But, before anybody decries this, it is good to remind ourselves that, in the “good old days” of 500cc Grand Prix racing, there were usually only a handful of “factory” bikes and the rest were “privateer” entries and yet the racing was still entertaining. So it may not be all doom and gloom. One this IS certain, however, the FIM and DORNA are going to make the absolute most of this opportunity to break the power of the manufacturers and to re-assert THEIR control of the sport and where it is heading.

Also in overnight is the news that Tony Elias will be dropping back to Moto2 with the Aspar team. He will be teamed with Nico Terol and the also-signed Aliex Espagaro will be promoted back into MotoGp on an Aspar CRT bike. He will probably ride alongside RdP (see above).

In WSBK, the Ten Kate team completed a successful two-day test at Qatar with both Jonathan Rae and Hiroshi Aoyama logging in as many laps as possible before the WSBK testing ban precludes any more track time till January 15th.

I don’t normally report on scooters, but, when BMW gets involved, you know that the clever Teutonic engineers have probably done something a little outside of the box. The following article shows that they have, indeed been working overtime.

On the home front, my wife’s tentative diagnosis of breast cancer has been confirmed and she goes into hospital on the 1st December for an operation to remove the small lump and also ensure that the cancer hasn’t spread anywhere else. It is a tense time for us at the moment, seemingly going through the motions not quite believing that it has happened to us. Support from friends and Helena’s work colleagues has been outstanding and we’ll just have to tough it out.