Lots of stuff to talk about today. This weekend sees the 14th round (of 18) of the MotoGp World Championship. Casey Stoner heads to Aragon in Spain with a slightly reduced but still healthy points lead after his 3rd place at Misano. Realistically, he can cruise and collect from here, but, of course, he won’t.

Motoland Aragon is a typical modern, multi-use facility with the Grand Prix track being nice and new but not much else. No high-speed corners except for the curve in the main straight and a ridiculous hairpin as T1 and another as T4. Do you get the idea I don’t like modern tracks?? As usual all the stats ahead of the meeting will be here tomorrow.

Shadowfax news rolls on. My carburettors arrived at Dave’s place last night so that is a major step forward. Today the front disks are heading to Melbourne to Planet Motorcycle Disks to be skimmed down from 6mm to 4.5mm thus saving quite a reasonable amount of weight. I’ll be delivering the wheels to Greg this weekend so that they can be re-assembled.

This weekend sees a double-header for the PCRA at Wakefield Park. Yours truly will be in the commentary box for both days. Bucket Nationals on Saturday and the One Hour Post-Classic enduro on the Sunday. Sadly, Club President, Keith Higgs is a withdrawal from the event after pinching a nerve in his back while go-karting.

At least he’s a bit better off than this rider who totalled his 675 at Donnington last weekend.

How to disassemble a Triumph 675.

My good mate, Len Smith, is publishing some wonderful old images from Oran Park in the early 80’s, like this one. 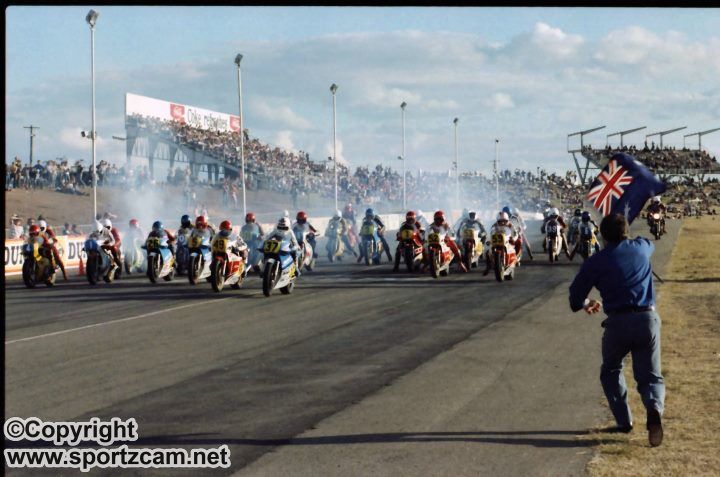 It prompted me to wonder how much of Oran Park you can still see. So I jumped onto Google and found this series of images taken from the air showing the growth of the new housing estate. Interestingly, it looks like the actual circuit area is not going to be developed (or maybe just not yet)

In other MotoGp news, the provisional 2012 calendar has been released showing that the Sachsenring round has been dropped as the organisers feel that the fees that they pay to DORNA to host the event are too high. I suppose they’ll replace it with another race in Spain…don’t get me started.

OK, that’s it for today. Better get out and get some chores done.